Why Professor Rosa Brooks Added Police Officer to Her Resume

Professor Rosa Brooks’s resume has long included more than academic achievements. She’s worked for the Department of Defense and Department of State, been a newspaper columnist and consulted for human rights groups, to name a few. Four years ago, amid heightened tensions over police violence around the country, Brooks decided to add D.C. reserve police officer to the list.

The result of her experience is a new book, Tangled Up in Blue: Policing the American City — as well as the Police for Tomorrow fellowship program at Georgetown Law. In a recent interview, she discussed both: 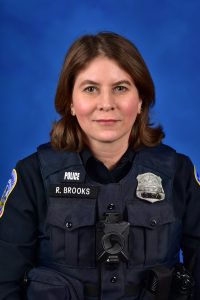 Four years ago, you decided to join Washington D.C.’s Metropolitan Police Department as a sworn, armed reserve police officer. Why?

I’ve spent much of my career researching and writing about the relationship between law, violence, and the stories people tell about law and violence. Policing in the U.S. is a stunningly violent enterprise, and when I learned about the D.C. Police Reserve Corps, it seemed to me that joining it would be a fascinating way to better understand how American policing came to be the way it is. If you want to change something, first you need to understand it.

What kind of training did you receive as a reserve police officer? What struck you most about the way officers are trained?

I went through the same police academy curriculum as career recruits. We learned about the chain of command, about property crimes and violent crimes, and about the astonishing number of vehicular offenses that can get someone in trouble in Washington, D.C. We learned how to conduct field sobriety tests and felony traffic stops. We learned the right technique for hitting people with an expandable baton. We learned how to shoot and how to treat a sucking chest wound.

In a lot of ways, what we didn’t learn was much more striking to me than what we did learn. When I went through the D.C. police academy, the whole nation was having a conversation about policing, as we still are now: it was two years after Eric Garner’s death in New York, Michael Brown’s death in Ferguson, and Tamir Rice’s death in Cleveland, and one year after Freddie Gray’s death in Baltimore. While I was at the police academy, police killed Alton Sterling in Louisiana and Philando Castile in Minneapolis, and a sniper killed five police officers in Dallas. There were protests all over the country. Everyone in the country seemed to be talking about police violence and racially discriminatory police practices, and whether policing could be fixed. But virtually none of this found its way into the classrooms at the police academy in the nation’s capital. It was pretty stunning.

What surprised you most about your experience as a cop?

It’s incredibly hard to be a good cop. This really came home to me once I started patrolling.

By underfunding other social services we’ve created a society in which cops are all-around first responders to everything from shootings, stabbings, domestic assaults and burglaries to mentally ill people walking down the middle of the street talking to themselves. And no one really has the skills to handle all those very different kinds of situations well.

Saying police officers have hard jobs doesn’t excuse police abuses or the many, many biases, inequities, and cruelties baked into the system. The public has a right to expect—and demand— better policing and radical changes to a system that routinely injures, kills, and incarcerates people, particularly people of color and the poor. But on an individual level, it’s extraordinarily tough to be a good police officer.

In the wake of the deaths of Breonna Taylor, George Floyd, and many other Black individuals at the hand of the police, there’s been an ongoing, heated debate about racism and the role of the police in our communities. What do you hope Tangled Up in Blue contributes to this conversation?

While I was writing this book, people kept asking me to give them the one-sentence-version of the argument the book makes. And I’d say, “It’s complicated.”

This never made anyone very happy. But policing is complicated. It’s absolutely accurate to say that the American criminal justice system is structurally racist, and that a great deal of what police officers do reflects and furthers that structural racism. But it’s also accurate to say that most police officers — not all, but most — are genuinely trying to make the communities they work in safer, and police officers really do help a lot of people. The racism and injustice are baked into the system so deeply that both these things can be true at once.

We live in a time of slogans, stereotypes and oversimplifications. I hope that Tangled Up in Blue will help people understand that it’s just not that simple.

Your experiences led you to propose a fellowship program at Georgetown Law that would encourage young officers to confront some of the “hard questions” of policing. Tell us about the Police for Tomorrow program.

I think that if we want to change police cultures, that change needs to start at the bottom with the newest and youngest officers. Typically, they’re idealistic and open to new ideas and often they’re hungry to be part of conversations about how to change policing for the better. But too often, they get all that idealism beaten out of them by the time they’ve been cops for a few years.

In 2017, I worked with several colleagues in the D.C. Police Department and at Georgetown Law to create what we called the Police for Tomorrow Fellowship Program. When young officers are accepted, they participate in a year-long series of workshops at Georgetown Law on all the topics they don’t discuss at the police academy: What should the role of police be, in a diverse and democratic society? What would “good” policing look like? How would we measure it?

We have workshops on topics such as race and policing, implicit bias, poverty and crime, D.C.’s changing demographics and the impact of gentrification on policing, mental illness, adolescent brain development, police use of force, innovative approaches to reducing violence, over- criminalization, and mass incarceration.

The workshops are pretty intense. Our fellows meet with homeless shelter residents, with local high school kids, and with community activists, social workers, and academics as well as with police leaders from other cities who have done innovative work. Some of our sessions have been pretty emotional. People argue, they share very personal experiences, they cry. It’s been a pretty amazing experience to watch these young officers struggling to become change-makers within their own communities and their own department. All our fellows also develop capstone community projects after their workshop year.

The program is now in its fourth year. We’ve “graduated” two cohorts of fellows and we’re now working with the third cohort. We have a “sister” program in New Orleans, modeled after ours, and we’re working with other communities to create similar programs. The ideas generated in the Police for Tomorrow workshops have also led to some real changes in D.C. policies, which is very exciting. As members of our first cohort move into positions of greater responsibility, they’re doing good things.