“Last year, I said with the [retirement] of Justice Anthony Kennedy, that a big change was coming — it was only a question of how far and how fast,” said Professor from Practice Irv Gornstein, as he introduced the 2019 Supreme Court Institute Press Preview at Georgetown Law on September 24.

The event explored, for members of the media who attended, some of the significant upcoming cases the Supreme Court will hear this term. 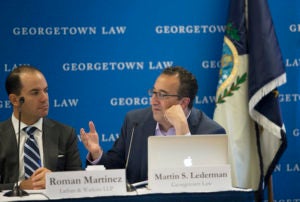 “Last term’s answer was not all that far and not all that fast. In part that was because some of the most controversial cases were pushed on to this term, and in part because the mix of cases left produced some strange alliances…,” said Gornstein, the Institute’s executive director. “I predict that this term will be an ‘even more so’ term, probably not the revolution that some seek and others fear, but we will likely see a Court moving further and faster in a rightward direction. The docket almost guarantees it.”

On the Court’s docket, Gornstein noted, are cases involving sexual orientation and transgender status, Deferred Action for Childhood Arrivals (DACA), the Second Amendment, aid to religious schools and the prosecution of politicians for fraud. On hand to discuss those cases at the preview were a number of Supreme Court advocates and scholars including Georgetown Law Lecturer Paul Clement (F’88) of Kirkland & Ellis; Professor Martin S. Lederman; Roman Martinez of Latham and Watkins; Nicole Saharsky of Mayer Brown; and Professor from Practice Paul M. Smith.

“The cases raise the question of whether you [look at what was intended when the statute was] enacted in 1964 versus what the language seems to say, which is interesting as a matter of statutory interpretation,” Smith said. “The argument for [Title VII] covering the transgender case is that you don’t fire somebody because they went home as a man and came back as a woman. That has got to be viewed as a form of discrimination based on gender or sex.”

In 1964, when the statute was enacted, same-sex relations were illegal in most states, Smith noted. Looking at the text itself, however, “the textual arguments are pretty strong.”

“It would be huge for the LGBTQ community to have protection in the private sector in an employment situation,” he said.

Saharsky examined the Deferred Action for Childhood Arrivals cases, in which the government argues that its decision to rescind the 2012 policy deferring the removal of certain aliens brought to the United States as children is not reviewable by the Court — or if it is reviewable, that the decision is not arbitrary or capricious.

“The DACA program is the program for individuals who came to the United States as children without legal documentation to be in the United States, who lived their lives here, who followed the rules that the government set out…being good citizens, not committing crimes, and who [since] the DACA program was put in place in 2012 have had the ability to stay here,” Saharsky said, noting that between 700,000 to 800,000 people are affected. “This is a program put in place by a government agency; it is not something that Congress put in place — which is important, because now the agency says that it can get rid of this program.”

Clement led the discussion of Espinoza v. Montana Department of Revenue, which will examine the extent to which the Free Exercise Clause prohibits a state from refusing to provide benefits to religious organizations that it provides to secular organizations. Martinez ran through some of the Court’s criminal cases (20 of the 50 of the cases currently on the Court’s argument docket for the coming term are criminal matters), and Gornstein discussed the first Second Amendment case to be heard by the Court in nearly a decade, involving a New York City ban on transporting a licensed, locked and loaded handgun.

Lederman examined cases involving presidential powers that could possibly be heard by the Court this term. “This is the other area of the law in addition to the religion clauses in which there could be a very dramatic shift in jurisprudence between what we saw in the Rehnquist Court and the current court…” he said, pointing to cert petitions involving subpoenas of the president’s accountants and bank records. “There are obviously a lot of things that could come up this term — or that might not, and the election could moot out a lot of these questions. Or — maybe not.”