The first-ever verdict under Hong Kong’s 2020 National Security Law does not adhere to international law and comparative best practice, according to an analysis published by Georgetown University Law Center’s Center for Asian Law (GCAL). In a decision released in July 2021, Hong Kong’s High Court found pro-democratic protester Tong Ying-kit guilty of inciting secession and terrorism. Tong was later sentenced to 9 years in prison.

“Hong Kongers look to the courts to protect their basic rights, even in high-profile cases,” said Thomas E. Kellogg, executive director of GCAL and a co-author of the report. “In Tong Ying-kit’s case, the High Court didn’t even mention Tong’s right to free expression, much less reconcile that right with the charges against him. Its failure to do so sets a dangerous precedent for the dozens of other NSL cases making their way through Hong Kong’s courts.” 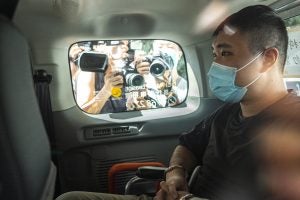 Tong Ying-kit arrives at a West Kowloon court in Hong Kong on July 6, 2020. Tong, who was accused of driving his motorcycle into a group of police while carrying a pro-democracy banner during a July 1 protest, was convicted of inciting secession and terrorism and sentenced to 9 years in prison in July 2021. He is the first person to be convicted under Beijing’s sweeping new
National Security Law.

Tong, 24, was among the first to be arrested under the NSL, just hours after it went into effect on July 1, 2020. Tong took part in a demonstration that day, but instead of marching along with other protesters, Tong drove his motorcycle while carrying a banner bearing the popular protest slogan, “Liberate Hong Kong, Revolution of Our Times.” Apparently as part of his act of protest, Tong drove his motorcycle around police checklines, at times at high speeds, earning cheers from the crowd. Tong eventually collided with a group of police officers, injuring three of them. He was immediately arrested.

The inciting secession charge stemmed from Tong’s use of the now-forbidden protest slogan. Because the government sought to punish Tong for his political speech, the court should have weighed whether such speech is protected under Article 27 of Hong Kong’s Basic Law, which guarantees the right to free expression. The glaring absence of any rights-based analysis in the court’s verdict is striking, and may speak to the political pressure that the courts are facing since the implementation of the NSL in mid-2020.

Article 39 of the Basic Law makes clear that the International Covenant on Civil and Political Rights (ICCPR) remains in force in Hong Kong, which means that all Basic Law rights provisions – and, by extension, all NSL criminal provisions – should be interpreted in ways that are consistent with international human rights law. Generally speaking, key international human rights bodies, including the United Nations Human Rights Committee (UNHRC) have held that restrictions on rights in the name of national security must be narrowly tailored and directly tied to a legitimate national security interest. Given that Tong did not directly advocate political violence, it is highly unlikely that his use of the protest movement slogan would meet that rigorous test.

Tong’s conviction for terrorism similarly deviates from international law and comparative best practice. In the years since the September 11, 2001 attacks on the United States, the international community has taken several steps to put forward a legal definition of terrorism, and to put forward guidance to states seeking to balance counter-terrorism with human rights. The drafters of the NSL largely ignored this growing body of international and comparative law. As a result, the NSL definition of terrorism is vague and over-broad, and all too susceptible to manipulation or abuse.

In its verdict, the High Court failed to judicially limit the text of the NSL. Instead, it further stretched the already loose text. Throughout its verdict, the court defined key elements of the crime of terrorism downward, while at the same time inflating the seriousness of Tong’s actions to fit the core elements of the crime. Given that Tong did engage in actions that injured three police officers, he no doubt could have been charged with a crime under Hong Kong’s Crimes Ordinance. But his actions simply don’t rise to the level of terrorism, as defined by international law and comparative best practice.

“For years, we’ve seen governments around the world abuse counter-terror laws to crack down on political opponents. Hong Kong has now become a part of this shameful pattern,” said Kellogg. “Tong Ying-kit’s human rights hang in the balance. On appeal, the court should take a closer look at the lessons learned by other states, and make sure that counter-terror laws are only used against those engaged in actual terrorist activity.”