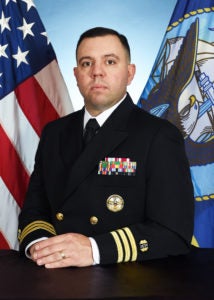 CDR Peter P. Pascucci is currently assigned to U.S. Special Operations Command. CDR Pascucci received his bachelors of arts degree in marine and coastal policy from the University of Rhode Island in 2000 and his juris doctorate from Roger Williams University School of Law in 2003. He received a masters of arts degree, with distinction, in national security and strategic studies from the Naval War College in 2013, and a masters of law degree (LLM), with distinction and dean’s list recognition, in national security law from the Georgetown University Law Center in 2015.

Additionally, he is the 2015 recipient of the Thomas B. Chetwood S.J. prize for academic excellence in national security law at Georgetown. CDR Pascucci received his commission as an Ensign through the student program in 2002 and entered active duty service in January 2004.

In April 2004, CDR Pascucci reported to Naval Legal Service Office Mid-Atlantic where he served as a legal assistance attorney, defense counsel, and subsequently as the Assistant Department Head/Deputy Senior Defense Counsel. In February 2006, CDR Pascucci reported to Regional Support Organization Norfolk where he served as Staff Judge Advocate to multiple surface combatants in Norfolk and Bahrain.

In August 2009, CDR Pascucci reported to the Office of the Vice Chief of Naval Operations where he served as Deputy Legal Counsel until July 2011.

CDR Pascucci is admitted to practice before the Supreme Court of the United States, and courts of the State of Rhode Island, the Commonwealth of Massachusetts, and the Court of Appeals of the Armed Forces.