At the time, he wasn’t sure if a career in the subject would prove successful, but his antitrust professor Robert Pitofsky assured him it would work out. It was sage advice: Pitofsky, after serving as dean of Georgetown Law from 1983 to 1989, would go on to serve as chairman of the Federal Trade Commission from 1995 to 2001.

“The way [Pitofsky] conducted the FTC…is an example of what [the agency] can do when it’s working at its absolute best…” Simons told a crowd gathered at Georgetown Law on September 13. “Bob inspired a lot of people who have gone through their careers trying to live up to the high standards [he] set; I am one of those people.”

Earlier that day, Simons had launched a full day of FTC hearings — in Georgetown Law’s Hart Auditorium — on competition and consumer protection in the 21st century. The event was also a nod to Pitofsky, who as FTC chair in 1995 held two months of public hearings on FTC competition and consumer protection in anticipation of the new century. While Pitofsky could not attend the latest hearings, his wife Sally and son David (L’91) represented him on campus during the day.

As Pitofsky said in 1995, “‘these hearings are designed to restore the tradition of linking law enforcement with a continuing review of economic conditions to ensure that the laws make sense…’” Simons said. “We intend to continue that same tradition.”

The broad antitrust consensus that has remained relatively stable for the past 25 years is being challenged in at least two ways, Simons noted. The U.S. economy has grown more concentrated and less competitive, correlating with a shift to a less enforcement-oriented antitrust policy. Second, some are debating the nature of antitrust itself, calling for enforcers to consider questions of inequality, labor and excessive political power.

“These concerns pose a challenge for antitrust agency leadership, the courts and legislators to think hard about whether significant adjustments to antirust doctrine, enforcement decisions and law would be beneficial to our country,” he said.

Yet basing antitrust policy and enforcement decisions on an ideological viewpoint, left or right, is a mistake, Simons said.

“Whether or not we expand antitrust beyond the consumer welfare standard, I would rather make policy and enforcement decisions based on the best evidence and analysis…empirically grounded economic analysis that enables the analyst to weigh the costs and benefits (broadly defined) to help determine the best approach,” he said.

“My hope is that these hearings will significantly improve our ability to do so, and help to bring about a new and improved consensus among our antitrust stakeholders.”

As Dean William M. Treanor noted, other members of the Law Center community have a deep connection to the FTC, antitrust and consumer protection. Other leaders have been graduates of Georgetown Law, including commissioner nominee Christine Wilson (L’95); former commissioner Christine Varney (L’86); and Monique Fortenberry (L’95), deputy executive director of the FTC. “We are very proud of having educated so many,” the dean said.

“I am honored to participate again as I did in the Pitofsky hearings, and I am returning to my antitrust roots here at Georgetown, because my antitrust career started my final semester in law school…when I studied antitrust law with Bob Pitofsky…” McDavid said.

“I speak here as a practitioner, who advises clients every day on antitrust issues, and I share the FTC’s view that competition produces the best, most innovative, lowest priced products and services for consumers,” she said. “Most antitrust enforcement actually takes place in conference rooms and law firms, and board rooms in corporations, where people like me advise our clients on where the lines are — and how they can achieve their business objectives without crossing those lines.”

Vladeck (who later participated in a panel on “The Regulation of Consumer Data”) discussed the FTC’s challenges surrounding technology—including tech infrastructure, protecting consumers in a digital economy and the regulation of big data. “We need to figure out how to protect consumers in this area of ubiquitous data collection,” he said. 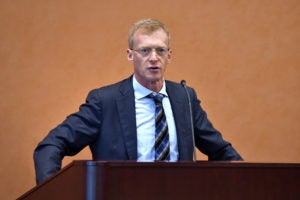 In his concluding remarks, Shelanski said that the importance of the hearings —which will continue on other days — cannot be overstated.

“The FTC has always been an agency that cannot stand still and rest too comfortably with the problems it is focusing on, or with the tools with which it is analyzing its approaches to the problems; indeed, that was the spirit in which Chairman Pitofsky launched the hearings nearly a quarter century ago….,” Shelanski said.