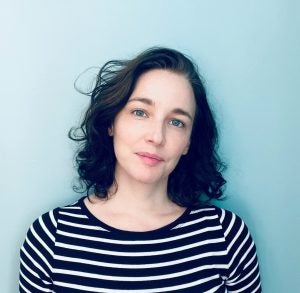 Emily Tucker is the Executive Director at the Center on Privacy & Technology at Georgetown Law, where she is also an adjunct professor of law. She shapes the Center’s strategic vision and guides our programmatic work. Emily joined the Center after serving as a Teaching Fellow and Supervising Attorney in the Federal Legislation Clinic at the Law Center. Before coming to Georgetown, Emily worked for ten years as a movement lawyer, supporting grassroots groups to organize, litigate, and legislate against the criminalization and surveillance of poor communities and communities of color. She was Senior Staff Attorney for Immigrant Rights at the Center for Popular Democracy (CPD), where she helped build and win state and local policy campaigns on a wide range of issues, including sanctuary cities, language access, police reform, non-citizen voting, and publicly funded deportation defense. Prior to CPD, Emily was the Policy Director at Detention Watch Network, where she now serves on the Board. Emily’s primary area of legal expertise is the relationship between the immigration and criminal legal systems, and she is committed to studying and learning from the histories of resistance to these systems by the communities they target. Emily earned a B.A. at McGill University, a Masters in Theological Studies at Harvard Divinity School, and a J.D. at Boston University Law School. You can email Emily at et599@georgetown.edu. 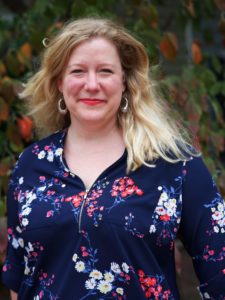 Photo by TY B Photos.

Katie Evans is the Deputy Director at the Center and is responsible for supporting the Center’s strategic goals. She does this through development, alignment and oversight of strategic planning which include communications strategy, fundraising support, administration oversight, human resources, and financial management. She has expertise in building effective, public service-oriented organizations. Before coming to Georgetown Law, she worked in research centers at American University, the University of Minnesota, and the University of Texas at San Antonio. She has a B.A. in international studies from the University of Minnesota Duluth and an M.A. in political science from Central European University. Her thesis focused on political communication and technology. You can follow Katie on Twitter at @mskatieevans. 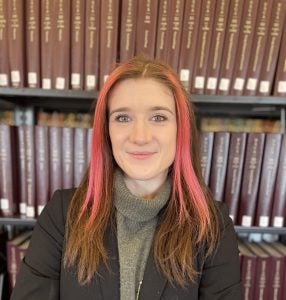 Meg Foster is a Justice Fellow with the Center, where she researches the impact of surveillance of marginalized communities. She recently earned a J.D. from Northeastern University School of Law, where her work focused on the disparate impact of surveillance on marginalized communities, particularly in the context of the criminal legal system. She won Northeastern University Law Review Founder’s Award for her article analyzing the shortcomings of U.S. privacy legislation through the lens of Derrick Bell’s theory of interest convergence. She served as co-chair of the Law and Information Society at Northeastern and during her time there worked with the Electronic Privacy Information Center, ACLU of Massachusetts Technology for Liberty Project, the Massachusetts Supreme Judicial Court, and the Committee for Public Counsel Services Innocence Program. Meg has a B.A. in history and an M.S. in information science from the University of North Carolina at Chapel Hill. You can email Meg at meg.foster@georgetown.edu. 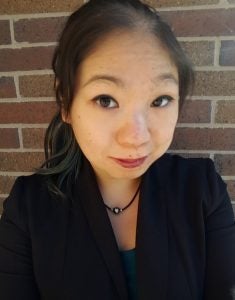 Cynthia Khoo is a Senior Associate at the Center where her current focus includes commercial data practices and their civil rights implications and the impact of worker surveillance on privacy and other human rights. She is a technology and human rights lawyer licensed in Ontario, Canada, and joined the Center following seven years of legal advocacy and research with several digital rights NGOs and as part of her sole practice law firm. Prior to Georgetown, Cynthia co-authored two landmark reports by the Citizen Lab (University of Toronto), where she remains affiliated: To Surveil and Predict: A Human Rights Analysis of Algorithmic Policing in Canada (2020) and Installing Fear: A Canadian Legal and Policy Analysis of Smartphone Spyware and Stalkerware Applications (2019). She was also the sole author of a groundbreaking report for the Women’s Legal Education and Action Fund (LEAF), Deplatforming Misogyny: Report on Platform Liability for Technology-Facilitated Gender-Based Violence (2021), which advanced national platform regulation discourse beyond the false dichotomy between equality and freedom of expression. Cynthia has been consulted by the Canadian government and regulators as a result of her work and regularly appears in print and broadcast media. She holds a J.D. from the University of Victoria and LL.M. (Concentration in Law and Technology) from the University of Ottawa, where she worked as junior counsel at and represented the Samuelson-Glushko Canadian Internet Policy and Public Interest Clinic (CIPPIC) as an intervener in cases before the Supreme Court of Canada. You can follow Cynthia on Twitter at @cyn_k. 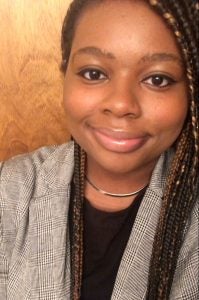 Korica Simon is an Associate at the Center, where she focuses on worker privacy and the impact surveillance practices have on marginalized communities. She earned a J.D. from Cornell Law School with a concentration in advocacy and is currently licensed in New York. While in law school, she co-authored FOSTA In Legal Context (2020), which explores the legal effects of the Fight Online Sex Trafficking Act and the impact it had on internet companies and people in the sex trades. She also worked as a teaching assistant for “Information Ethics, Law, and Policy” an information science course where she collaborated with students to identify how the law should respond to new technologies. She is a past fellow of the Initiative for a Representative First Amendment through Harvard Law School’s Cyberlaw Clinic. Through this fellowship, she worked at UC Berkeley’s Samuelson Law, Technology & Public Policy Clinic, where she researched and wrote legal work on issues affecting journalists and people crossing the border. 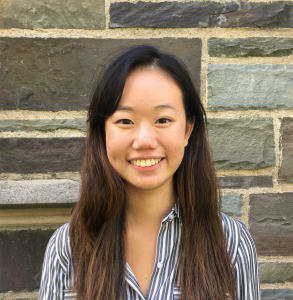 Nina Wang is a Policy Associate with the Center, where she conducts research on government surveillance of immigrant communities. Before coming to Georgetown Law, she was a data scientist at Microsoft Data & AI, where she helped develop intelligent code completion tools for software developers. Nina earned her A.B. in computer science from Princeton University, where she studied topics in artificial intelligence and public policy with the Center for Information Technology Policy. Her undergraduate research examined the legal and ethical frameworks shaping the governance of natural language technology. You can follow Nina on Twitter @ninalwang. 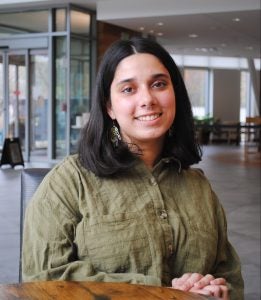 Serena Zets is the Communications Associate at the Center, where she uplifts the Center’s critical research. She previously interned in the U.S. Department of Justice’s Civil Rights Division where she assisted in federal investigations of civil rights compliance and enforcement. Serena got their start in communications through community organizing around issues of racial justice, immigrants’ rights, and criminal legal system reform. Serena earned their B.A. in sociology and political science from Oberlin College in 2021. 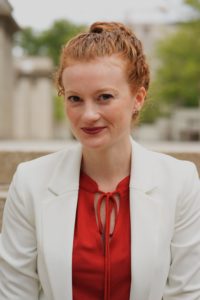 Photo by TY B Photos.

Clare Garvie is a Distinguished Fellow with the Center. She worked at the Center from 2015 to 2021 where she was the lead author on four reports on police use of face recognition, including: The Perpetual Line-Up: Unregulated Police Face Recognition in America in 2016; Garbage In, Garbage Out: Face Recognition on Flawed Data and America Under Watch: Face Surveillance in the United States in 2019, and A Forensic Without a Science: Face Recognition in U.S. Criminal Investigations, forthcoming in 2022. She received her J.D. from Georgetown Law and her B.A. from Barnard College in political science, human rights, and psychology. You can follow Clare on Twitter at @clareangelyn. 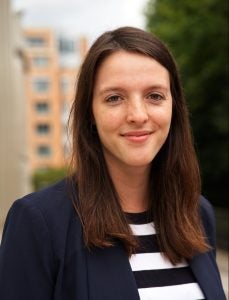 Allison McDonald is a Distinguished Fellow with the Center. She first joined the Center as a summer fellow in 2019 and then became a research fellow from 2019 – 2022 where she contributed to research on government surveillance of immigrant communities and co-authored American Dragnet: Data-Driven Deportation in the 21st Century. She is an Assistant Professor in the Faculty of Computing & Data Sciences at Boston University, where her research focuses on understanding how technology threatens the privacy and safety of high-risk populations. She received her Ph.D. in computer science from the University of Michigan and also holds a B.S.E. in computer science and a B.S. in German from there as well. You can follow Allison on Twitter at @allismcdon. 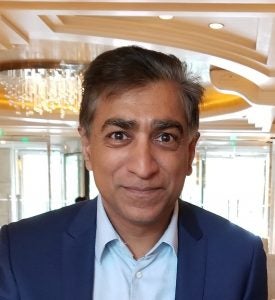 Anupam Chander is a faculty advisor for the Center. Professor Chander is a leading expert on global technology regulation. A graduate of Harvard College and Yale Law School, he served as the Martin Luther King, Jr. Professor of Law and the Director of the California International Law Center at UC Davis. He practiced law at Cleary, Gottlieb, Steen and Hamilton in New York and Hong Kong. He has served on the Executive Council of the American Society of International Law. A recipient of Google Research Awards and a Mellon-Sawyer Award, he has served as a consultant to UNCTAD and as a member of digital economy expert groups convened by the World Economic Forum. 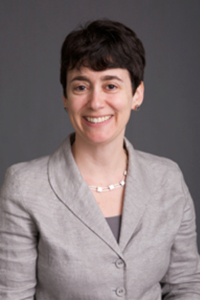 Julie Cohen is a faculty advisor for the Center. Professor Cohen is one of the nation’s foremost privacy theorists. She teaches and writes about surveillance, privacy and data protection, intellectual property, information platforms, and the ways that networked information and communication technologies are reshaping legal institutions. She is the author of Between Truth and Power: The Legal Constructions of Informational Capitalism (Oxford University Press, 2019); Configuring the Networked Self: Law, Code and the Play of Everyday Practice (Yale University Press, 2012), which won the 2013 Association of Internet Researchers Book Award and was shortlisted for the Surveillance & Society Journal’s 2013 Book Prize; and numerous journal articles and book chapters. 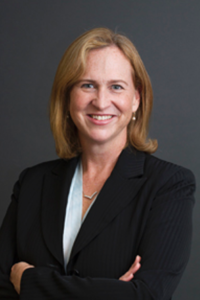 Laura Donohue is a faculty director for the Center. Professor Donohue is one of the nation’s leading experts on constitutional law, national security law and emerging technology. She directs Georgetown’s Center on National Security and the Law. In 2015 she was appointed as an amicus curiae to the United States Foreign Intelligence Surveillance Court under the USA FREEDOM Act. Her articles have been published by California Law Review, University of Chicago Law Review, Stanford Law Review, and numerous other journals. Her most recent book, The Future of Foreign Intelligence: Privacy and Surveillance in a Digital Age (Oxford University Press, 2016), was awarded the 2016 IIT Chicago-Kent College of Law/Roy Palmer Civil Liberties Prize. 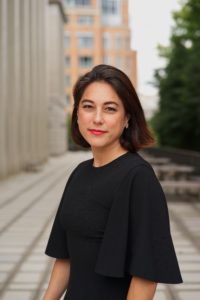 Laura Moy is a faculty advisor for the Center. Professor Moy directs the Communications & Technology Clinic at the Institute for Public Representation at Georgetown Law. She has written, spoken, and advocated before federal agencies and Congress on a broad range of technology policy issues, including law enforcement surveillance, consumer privacy, security research, device portability, copyright, and net neutrality. Her current work focuses on policy issues at the intersection of privacy and the criminal legal system. In 2016, Laura served as Acting Director of the Communications &amp; Technology Clinic and prior to that worked at New America’s Open Technology Institute and Public Knowledge. Laura completed her J.D. at NYU School of Law and her LL.M. at Georgetown. Before law school, Laura analyzed cell site location information for the Manhattan District Attorney’s Office. You can follow Laura on Twitter at @lauramoy. 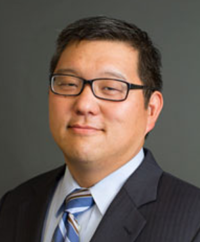 Paul Ohm is a faculty advisor for the Center. Professor Ohm is an expert in issues at the intersection of privacy and technology. As both a lawyer and computer programmer, he writes and teaches about information privacy, Internet law, computer crime, and cybersecurity. He has served as the Senior Policy Advisor at the Federal Trade Commission and as a trial attorney in the Department of Justice’s Computer Crime and Intellectual Property Section. You can follow Professor Ohm on Twitter at @paulohm. 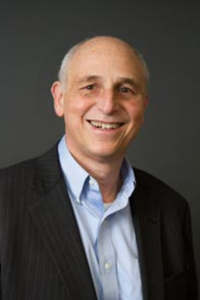 David Vladeck is the faculty director of the Center. Professor Vladeck recently returned to Georgetown Law after serving for nearly four years as the Director of the Bureau of Consumer Protection of the Federal Trade Commission (FTC). The FTC is the nation’s chief regulatory agency charged with protecting privacy and data security with respect to commercial entities. During his tenure at the FTC, the agency brought over 50 privacy enforcement cases, many against large technology firms, including Google, Facebook, Twitter, Myspace and others. The agency also issued many guidance documents on online and mobile privacy. Professor Vladeck is a member of the National Academy of Sciences Committee on Science, Law and Technology, and is on the boards of the Natural Resources Defense Council, the Center for Democracy and Technology, and the National Consumers Law Center.