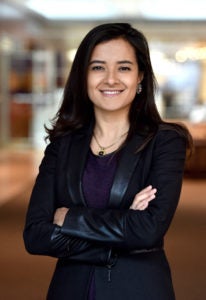 Ana was born in Medellín, Colombia but grew up in Houston, Texas. She received her undergraduate degree from Rice University, where she majored in French and Public Policy Studies and minored in Poverty, Justice, and Human Capabilities.  While at Rice, Ana worked with organizations around the world to study the causes and consequences of immigration. Her thesis focused on how to best provide holistic legal services to victims of human trafficking in Houston.

After graduating, Ana was awarded the Zeff Fellowship to study coffee, from bean to cup, in eleven countries around the world. She worked alongside farmers, cooperatives, government institutions, nonprofits, and multinational corporations to understand how coffee shapes the world today from a variety of perspectives. She trained to become a coffee ‘sommelier’ and continues to do coffee consultations around D.C. with her company, the Capital Grind.

After returning to the United States, Ana worked with the Hillary for America campaign in Texas. The campaign work convinced her she wanted to get back into policy. She drove up to D.C. from Texas and started working as a Legislative Assistant for Congressman Lloyd Doggett, where she focused on immigration, foreign affairs, and criminal justice.

After leaving the Hill, Ana worked as an investigative specialist for the Public Defender Service in D.C., where she saw firsthand the urgent need for criminal justice reform. At Georgetown Law, Ana hopes to focus on the nexus between immigration and criminal justice. She hopes eventually to work for the rights of immigrants and refugees through the appellate system.