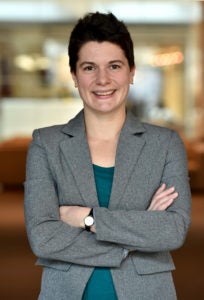 Arielle has worked in advocacy for survivors of sexual violence since graduating from the University of Oregon in 2011. Immediately prior to coming to Georgetown, she worked for the Americans Overseas Domestic Violence Crisis Center, a national nonprofit that assists American women living or traveling overseas who experience domestic violence, sexual assault, or sex trafficking.

She coordinated resources and services for safe international relocations for violence survivors and their families, and collaborated with American Embassies around the world, with other national and international nonprofits, and with different branches of the U.S. Armed Forces.

Her career serving gendered violence survivors began at a community-based domestic violence shelter and advocacy agency, the Center Against Rape and Domestic Violence (CARDV). At CARDV, Arielle helped survivors, many of whom were isolated in rural Oregon, navigate civil and criminal legal systems, find resources to establish stability after fleeing violence, and develop plans for long term safely and healing.

In partnership with a local residential drug and alcohol treatment facility, she developed a new program to educate and support teen survivors of dating violence, sex trafficking, and child sex abuse.

As an undergraduate at the University of Oregon, Arielle interned at the local Child Abuse Assessment Center helping families understand the complex legal process that occurs after a report of child physical or sexual abuse.

She also served as a Student Senator and a member-at-large on the Erb Memorial Union Board of Directors, and worked at the Women’s Center where she created a Volunteer Program to increase involvement and activism in women’s issues on campus. Arielle plans to use her law degree to influence law and policy to reduce barriers and increase safety for those most vulnerable to violence in our society.