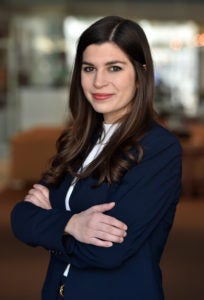 Grace is passionate about pursuing a career in impact litigation in the public interest. To that end, during her first-year summer, she interned at the Immigrant Defense Project, where she worked on federal appellate cases involving the intersection of criminal and immigration law. During her second-year summer, Grace was a Summer Associate at Cohen Milstein, where she assisted with class-action litigation in the public interest. Following graduation, Grace will serve as the Supreme Court Assistance Project fellow at Public Citizen as well as a judicial law clerk for U.S. Court judges for the Southern District of New York and the Second Circuit. At Georgetown Law, Grace is Editor-in-Chief of The Georgetown Law Journal and was a finalist in the Beaudry Moot Court competition for first-year students. Grace also served as a student attorney in the Center for Applied Legal Studies clinic, where she successfully represented a political asylum seeker in Immigration Court.

Prior to law school, Grace worked on immigrant rights issues since graduating from college in 2013. Grace spent three years as a Program Analyst at the Vera Institute of Justice’s Center on Immigration and Justice, based in New York City. In her role at Vera, Grace focused on advancing immigrants’ access to legal information and counsel. Grace worked with federal government agencies and nonprofit organizations to help manage a number of immigration legal services programs.

Prior to joining Vera in 2014, Grace was a Global Academic Fellow at New York University’s campus in Abu Dhabi. There, she provided academic support for students and assisted in the university’s community relations department. While in Abu Dhabi, Grace volunteered at a shelter for female migrant workers who had fled their abusive employers and were waiting to be repatriated. Grace has also held numerous internships at public service organizations, such as the American Friends Service Committee Immigrant Rights Program in Newark, NJ and the Focus Forward Project in New York, NY. Grace also interned with the Justice Studies Center of the Americas in Santiago, Chile, an Inter-American organization focusing on justice system reform in Latin America.

In her spare time, Grace has held a number of volunteer positions. Most notably, Grace served a two-year term as Co-Chair of the Ms. Foundation for Women’s Young Professionals Advisory Committee during its inaugural two years. As Co-Chair, Grace helped build the committee’s membership, organize events, and raise funds for the foundation.