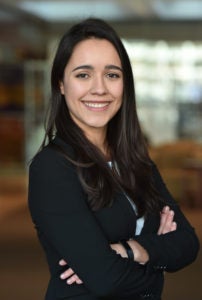 Ingrid is a Maryland native. She studied at the University of Maryland, College Park, where she earned her B.A. in Government & Politics and Spanish Literature and Culture.

During her undergraduate career, she focused on public policy and conflict resolution. She interned for the Department of Homeland Security (DHS), The National Consortium for the Study of Terrorism and Responses to Terrorism (START), and Congressional Research Service (CRS). These experiences within the federal government expanded her knowledge of terrorism and conflict research, big data, and policy applications.

Over the past two years Ingrid has worked for the Global Terrorism Database (GTD) at the National Consortium for the Study of Terrorism and Responses to Terrorism (START). While there she supervised the Target Classification domain and was responsible for the collection of data on the targets of global terrorist attacks for use by government agencies, researchers, and practitioners.

Through this work Ingrid analyzed at-risk communities across the globe and conducted research on political, security, and civil society structures in conflict zones.

While at Georgetown Law, Ingrid hopes to incorporate her experience in terrorism research into her legal studies. She plans to focus on national security law and international humanitarian law.