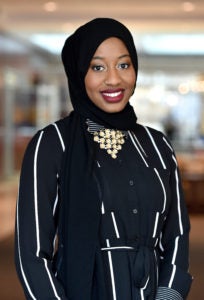 Nicole was born and raised in a tight-knit Ugandan American community located in Atlanta, Georgia. She always had a passion for human rights. She double majored in Global Studies and Arabic, and she minored in Social and Economic Justice at the University of North Carolina at Chapel Hill.

Her passion for justice has taken her all over the Middle East and North Africa (MENA). She has worked in Egypt, Tunisia, and Jordan on various human rights issues (respectively) such as migration and refugee resettlement, human rights abuses within prison settings, and abuses of migrant workers in the MENA region.

Upon her return from Tunisia to commence her senior year at Chapel Hill, her community was rocked with the loss of Deah Barakat, Yusor Abu-Salha, and Razan Abu-Salha in the Chapel Hill Shootings of 2015. She shifted her professional trajectory from the international arena to domestic crises surrounding growing concerns of institutionalized Islamophobia, racism, and the marginalization of religious and political identities.

As a grassroots activist and CAIR (DFW) intern who organized and provided on-the-ground support with regards to the Muslim ban at airports, she has seen how laws can have tangible consequences on the lives of the most marginalized in society. Conversely, she has also seen the importance of legal access in times of crisis.

Her professional interests, which draw directly from her experiences and the experiences of those in oppressed communities, are two-pronged. She hopes to engage in governmental and law enforcement accountability while also working to provide direct legal support to oppressed individuals and communities throughout the United States who have a diversity of identities, challenges, and forms of religious and political expression.