Professor Emma Coleman Jordan at Georgetown Law's conference on Law and Macroeconomics on September 27. Jordan led a discussion with Professor Daniel K. Tarullo, a former member of the Federal Reserve who teaches at both Harvard and Georgetown, and former Fed Chair Janet L. Yellen.

If a hashtag is what it takes to put law and macroeconomics on the academic map, Georgetown Law’s Institute of International Economic Law is all for it.

IIEL handed out stickers bearing “#LawMacro” to attendees at a two-day conference on September 27 and 28 that explored whether law and macroeconomics could emerge as a unique field of study, just as law and economics (microeconomics) has. But judging by who participated and their level of engagement, a viral hashtag will not be necessary. 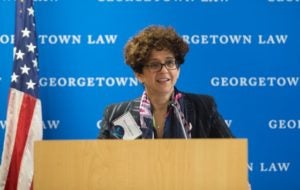 “The number of people and the phenomenal caliber of people who not just came but really actively participated tells me there’s potential,” said Georgetown Law Professor Anna Gelpern, who along with Professor Adam Levitin organized the event. Among the participants: Georgetown Law Professors Chris Brummer, Lily Faulhaber, Itai Grinberg, Sean Hagan, Emma Coleman Jordan, Donald Langevoort, John Mikhail, Eloise Pasachoff, Alvaro Santos, Howard Shelanski, David Super, Robert Thompson and Daniel Tarullo. Heather Boushey, president and CEO of the Washington Center for Equitable Growth, participated — as did Rhoda Weeks-Brown, general counsel of the International Monetary Fund, and eight economists from the Peter G. Peterson Institute for International Economics. “I can’t tell you how much of a privilege it is to have incredibly brilliant people engage with issues you think are important.”

What does it take to start a new field of study? “Probably a whole lot of hubris and a bit of timing,” Gelpern said at the start of the conference on September 27. “Serious interdisciplinary work is hard, risky, mostly thankless, and it can succeed only if you build a community of people who really invest in a shared set of research questions, suspend their skepticism…and get just the right balance of rigor and generosity.”

Gelpern and Levitin struck the right note, with two days of presentations by some of the most knowledgeable lawyers, scholars, economists and government officials in the field. As the pair noted, the Georgetown Law conference wasn’t the first attempt to launch law and macro as a field of inquiry; in the wake of the financial crisis of 2007-2008, a literature has emerged that might fairly be described as “law and macroeconomics…” Levitin said. 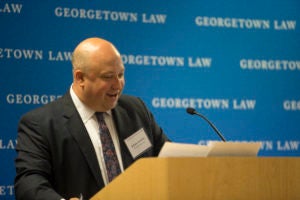 Combining law and economics is nothing new; over the past half century, the field “has become one of the dominant analytical modes of legal scholarship” and “has completely transformed many areas of the law,” he noted. But law and economics has usually been about microeconomics — focused on individuals or defined markets.

“The financial crisis was transformative in scholarship, as it forced the consideration of both the processes and institutions for addressing macroeconomic concerns, but also underscoring limits of certain tools in the macropolicy tool kit…” Levitin said. “Today, we will [hear from] legal scholars who recognize that their work intersects with macroeconomic policy, and also policy-minded macroeconomists who understand the importance of thinking about processes and institutions for effectuating…policy.”

Attendees heard from Randal Quarles, vice chair for supervision of the Board of Governors of the Federal Reserve System, and Chair of the Financial Stability Board, who examined the role that law and macroeconomics has played since the financial crisis a decade ago in promoting a more stable economy.

“The events of 2008–09 redefined our mission by more explicitly connecting macroeconomic and financial stability, as in the 1930s,” Quarles said, noting that Congress and the executive branch embraced a sweeping response, designing a system of laws to reflect a recognition that the cumulative, interconnected behavior of financial institutions had implications for financial stability and that even the behavior of a single large and complex institution could have implications for financial stability. This new system was also adopted at the international level. “Starting with the G20 summit in Washington, D.C., in November 2008, the global community established the runway for a structural change.”

The supervisory framework, he said, had to be macroprudential — focusing on mitigating systemic risk and accounting for macroeconomic consequences. “This reorientation was a defining part of the 2010 Dodd-Frank Act, and internationally, in the Basel III Accord.”

Quarles highlighted three important regulatory paradigm shifts following from this renewed focus on macroprudential regulation: a renewed focus on capital in the entire banking sector; regulators considering macroeconomic outcomes in calibrations and impact analyses; and combating pro-cyclicality. And he concluded by discussing three research topics that fall squarely in the intersection of law and macroeconomics: central bank mandates, financial stability monitoring, and due process.

Day One continued with the help of many economic powerhouses on the Georgetown Law faculty: Professor Donald Langevoort and Professor Robert B. Thompson led panels, while Associate Deans John Mikhail and Eloise Pasachoff introduced a luncheon session with Yale Law Professor Yair Listokin on “Law and Macro: What Took So Long.” Georgetown Law Professor Greg Klass provided comments on Listokin’s presentation. Listokin’s recent book, “Law and Macroeconomics: Legal Remedies to Recessions,” discusses how law can be used to respond to economic shocks and has helped boost the law and macro “movement.”

In the evening, Georgetown Law Professor Emma Coleman Jordan led a discussion with Professor Daniel K. Tarullo, a former member of the Federal Reserve who teaches at both Harvard and Georgetown, and former fed chair Janet L. Yellen — looking at the ways in which macroeconomic ideas should be implemented — or not — at the Federal Reserve. Tarullo and Visiting Professor Sean Hagan also served on the panels. 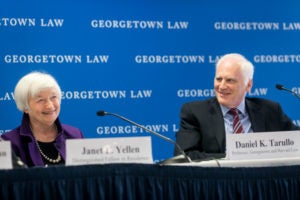 “What are the things left for future attention that so far haven’t been mentioned?” Coleman Jordan noted. “The shadow banking system? What about the vast economic inequality that is a feature of our democracy? In the ten years since the financial crisis the stock market has largely rebounded; however, the recovery has not benefitted everyone equally…this wealth increase has benefitted largely upper middle class…the conclusion is that race continues to be a major dividing line in wealth… There’s a lot of work to do, and maybe law and macroeconomic theory will get to some of these problems.”

On Day Two, commenting on a working paper, Georgetown Law’s Howard Shelanski noted that examining whether antitrust policymaking through after-the-fact, case-by-case adjudication — as opposed to rulemaking ahead of time — “is an important research strand.”

“To what extent,” he asked, “has the adjudicatory model in antitrust led markets to concentrate and consequently profit margins increase to the degree that antitrust, in the way it has been practiced and applied by the courts and the agencies, has contributed to the economic inequality?”

The law’s impact on wealth distribution and inequality is a particular knowledge gap a burgeoning law and macroeconomics field of study could help fill, Levitin said. 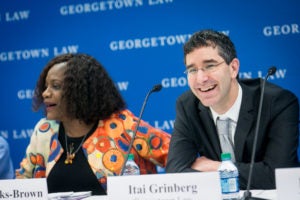 “Our real major goal with this conference was just trying to get people on board with the idea that there is some kind of a law and macroeconomic field even if we haven’t defined the exact boundaries,” Levitin said. “I’m optimistic that we’ve actually made real progress.”

“I feel like there was an appetite to do this again,” added Gelpern, “and that to me is a success.”