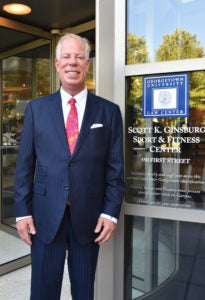 A 1978 graduate of Georgetown Law, Ginsburg previously funded the Scott K. Ginsburg Sport and Fitness Center at Georgetown Law. Ginsburg’s cumulative support now places him as the single most generous philanthropist in the Law Center’s history.

“The time I spent at Georgetown Law changed my life forever. Now, I’m able to return the favor, and transform the law campus,” said Ginsburg. “To be a part of these professorships and the transformative legacy they leave behind long after I am gone is the pinnacle of my career. Georgetown Law’s scholars are advancing the cause of justice every day – and training students to do the same. Being associated with these professors is one of the great honors of my life.”

Under the tenure of Dean William M. Treanor, the Law Center has increased student enrollment, created over 30 new faculty positions, and expanded high-impact research centers and institutes. “Scott’s remarkable generosity is giving us the capacity to house the world’s top law students and scholars and support their work,” Treanor said. “With our recent growth in programming and on-campus population, he is meeting a truly critical need for the Law Center community.”

“And, in years to come, the title ‘Ginsburg Professor of Law’ will become synonymous with the justice-focused initiatives and research coming out of Georgetown Law,” Treanor continued.

Ginsburg began his career on Capitol Hill, working for U.S. Congressman John C. Culver and U.S. Senator Dick Clark, both of Iowa. After serving as staff director and general counsel of the U.S. Senate’s Labor Subcommittee on Employment, Poverty and Migratory Labor, he embarked on a career in the radio broadcasting industry.

When Ginsburg turned to selling luxury cars, the result was his highly successful company, Boardwalk Auto Group. It operates numerous dealerships in Texas and California.

Ginsburg espouses a belief in giving back to the community and focuses his philanthropy on the needs of the homeless and the hungry, in addition to health care matters, the environment, the arts and education.