A Conversation with Professor Alvaro Santos, Director of CAROLA, on “USMCA: A New Path for Trade Agreements?”

Professor Alvaro Santos and CAROLA hosted a conference on April 22 regarding the U.S.-Mexico-Canada Trade Agreement (USMCA).

Elections have consequences. When leftist candidate Andrés Manuel López Obrador won the presidency of Mexico by a landslide in July 2018, his administration-to-be also won a seat at the table where talks to replace the North American Free Trade Agreement had started a year earlier.

Professor Alvaro Santos, director of the Center for the Advancement of the Rule of Law in the Americas (CAROLA), served as Deputy Negotiator for the Elected Government from July through November, when the U.S.-Mexico-Canada Agreement was signed by then-President Enrique Peña Nieto on his last day in office.

We talked to Santos about the treaty, and his role in creating it, in advance of the conference hosted by CAROLA on April 22: “USMCA: A New Path for Trade Agreements?” Participants included Grant Aldonas, executive director of Georgetown Law’s Institute for International Economic Law; Professor Jennifer Hillman; and Her Excellency Martha Bárcena Coqui, the ambassador of Mexico to the United States, who delivered a keynote address on the USMCA.

How did you get involved with the negotiating team?

In October 2017, not long after I became director, CAROLA organized “The Future of NAFTA and North American Economic Integration.” At that point, there had been a lot of talk about the importance of the agreement, but not much discussion of its costs and how it might contribute to a backlash against globalization. We focused on those concerns and on what governments could do to take better advantage of the agreement domestically.

Some months after the conference, I was contacted by a colleague at El Colegio de México, Dr. Gabriela Márquez Colín, who was working with the López Obrador campaign. (She is now Minister of Economy.) She introduced me to Jesús Seade, former Mexican negotiator of the Uruguay Round that led to the creation of the World Trade Organization (WTO) and former deputy Director-General of the WTO. After the election, Seade became the president-elect’s NAFTA chief negotiator and asked me to be his deputy. Of course, I was honored.

It was very exciting to make a practical contribution in the areas I’ve been researching and writing about, and to see how the real world differs from academia.

And what did you find?

It is a very different dynamic. There is not much opportunity for the luxury of reflection: ideas matter, yes, but they are only part of the equation. Strong interests and time constraints are just as important.

The world of political action moves fast. As academics we try to influence the world through our writings, but I came to realize that advancing ideas through discussion, debate and other personal interaction with policy-makers may be more effective and at any rate is an important complement. I hope to bring that perspective to my teaching and to involve my students with CAROLA projects, bridging theory and practice.

What was your biggest challenge as a negotiator?

The president-elect supported the renegotiation generally but had concerns about certain issues – primarily in the energy sector.

Energy was a particularly sensitive area. When a country makes obligations to free trade in certain sectors, it can also insert reservations, known as non-conforming measures. The problem was that many of the reservations inserted by the outgoing administration included references to the energy reform laws that Mexico had adopted in 2013, which opened the energy sector to foreign investors.

The president-elect had opposed the 2013 reforms. Although he had been clear that he did not intend to roll them back,  he did not want to endorse them in the USMCA, or to limit Mexico’s rights going forward.

It was not easy, but we found an approach everyone could accept. The agreement does not refer to the 2013 reforms by name, but the parties agree not to adopt measures that are more restrictive than those they have signed in other treaties, thus ensuring that Mexico gives the U.S. treatment equal to the one it gives other countries in the energy sector.

Significantly, the agreement includes a statement the president-elect very much wanted: it says that Mexico has “Direct, Inalienable, and Imprescriptible Ownership” over its energy resources, and the sovereign right to reform its Constitution and its domestic laws. This is the first time I’ve seen anything that explicit in such an agreement.

We also contributed significantly to the negotiation in other areas such as labor, investment and the sunset review mechanism, and to ensuring the successful completion of the negotiation, working with the outgoing government.

We concluded negotiations at the end of September, the agreement was signed on Nov. 30, and President López Obrador took office on Dec. 1. 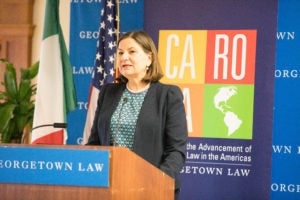 Martha Bárcena Coqui, the ambassador of Mexico to the United States.

All three governments are mobilizing support for ratification by their legislatures, just as they did with NAFTA 25 years ago. They understand they need to garner support for it. I am no longer part of that effort, but between September and the signing ceremony, I participated in several hearings at the Mexican Senate to explain the new provisions and address the law-makers’ concerns.

In Mexico, there is an additional step. Under the labor chapter’s Annex, Mexico must adopt legislation that strengthens workers’ rights and protections before the USMCA can enter into force. This was something the U.S. wanted very much but was also consistent with previous bills proposed by progressive parties and independent unions in Mexico, and with what the elected government wanted to do. The López Obrador government supports this labor reform and believes it is consistent with the majority, democratic will of Mexico as expressed in the 2018 election. At this point, the labor law reform has been passed by the Chamber of Deputies and is being considered in the Senate.

What’s your best argument for ratification?

This is an agreement that will be good for all three countries, both economically and in terms of nurturing our relationship. Governments will need to ensure that benefits are more widely shared and that those who lose are compensated. There are important changes in labor and investment provisions that begin to rebalance the asymmetry between capital and labor and could prefigure a new direction for trade agreements.

We are expecting the U.S. International Trade Commission’s Report on the economic impact of the USMCA on April 19, so we hope to be able to discuss it at the conference on April 22. I don’t want to oversell the economic benefits, though. The USMCA is a compromise; it may not be the best possible agreement, but the cost of not having an agreement would be far greater.

Beyond the economic effects, the USMCA is a very positive initiative that renews a partnership among North American neighbors. It should be promoted in a way to counteract the divisive anti-immigrant rhetoric, to highlight our shared past and common interests, and to build on a framework of cooperation for the future.