Law schools typically cover topics ranging from monopolies to marriage to mergers. The mental health of lawyers? Not so much. 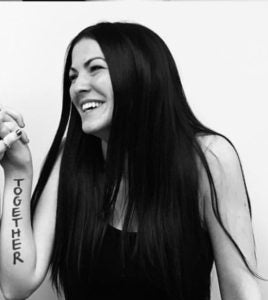 “Mental health is very important within the legal profession — and very stigmatized,” said Abbe Dembowitz (L’20). “We’re all so focused on grades and firms and accolades, and mental health is generally not part of the conversation.”

In an effort to change the conversation around mental health, Dembowitz created the Turn It Around Project, a photo and social media initiative that empowers individuals to create new narratives through a public confession of fears and a public commitment to change.

Growing up in Cherry Hill, N.J., the youngest of five children, Dembowitz was told she had potential but perpetually worried about not measuring up to her siblings — or anyone else. “If I wasn’t going to be good enough at something, I just wouldn’t do it,” she said.

Dembowitz’s anxiety led to an eating disorder that took a severe turn when she was a freshman at the University of Maryland in 2011. During a break from college, she moved to California, where she sought professional help. One therapist explained that while we may not have the power to change our first thoughts, we can change our second and third thoughts. “That really stuck with me,” Dembowitz said. “I wanted other people to understand that notion, and I thought creativity might be a good avenue.”

By 2015, she had transferred to Pace University, where she gathered a dozen friends to test out her innovative model: people talking openly about their fears, then writing them — and their positive counterparts — on their bodies with washable Crayola marker.

“I was shocked at how open people were,” she said. “People who didn’t know each other had similar fears and were delighted to hear that they weren’t alone.” She posted photos of the participants online, and Turn It Around was born.

Using social media, Dembowitz has now hosted a couple dozen Turn It Around events, working with people around the world — including middle school students, college students, Holocaust survivors and orphans — to focus on reversing self-destructive habits of negative thinking. In one photo, a negative message reads, “I’m nobody’s #1 choice.” The turn-it-around message is, “If I stay true to myself, I’ll find my people.”

At Georgetown Law in March, around the time of the ABA’s Law Student Mental Health Day, Dembowitz held a Turn It Around event with 50 participants. At a separate event celebrating International Women’s Day, she talked with women on campus about the intense pressure they felt to hide career ambitions and networks from each other. Opening up the conversation allowed them to understand that they can support each other. Dembowitz and a fellow student tagged themselves with: “Only room for one,” followed by “Stronger together.”

Dembowitz hopes to further integrate Turn It Around into student life and to expand the program to other law schools. “It is simply too big a problem to ignore,” she said. “A recognition of these issues within the legal industry is crucial, and I believe it starts with us.”

Dembowitz says she doesn’t wake up smiling every day. But she now has the tools to think healthier thoughts and a support system to which she’s accountable. “There are 50 people who I can reach out to who will remind me what we discussed,” she said. “And I can do the same for them.”