WASHINGTON (Nov. 9, 2018) – In the most comprehensive accounting of its kind to date, new Georgetown Law research finds that 138 elected and appointed officials were accused of sexual misconduct in the last election cycle. After this week’s election, at least 104, or 75 percent of them, will be out of office by January 2019. 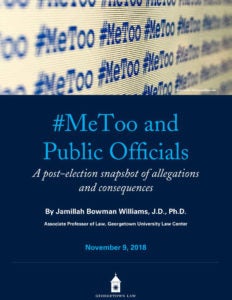 Click on the image to view the full report.

The research, led by Georgetown Law Professor Jamillah Bowman Williams, found public reporting that 111 elected officials and 27 other officials from 45 states were accused of sexual harassment, sexual assault, other sexual misconduct, and violence against women since the 2016 election. All but three of the accused were men.

Leading up to Tuesday’s election, the majority of the 138 accused officials had already left or been ousted from office. A total of 77 stepped aside, including officials who resigned, retired, decided not to seek reelection and two who committed suicide. Another nine officials were removed from office, and 15 lost their primary elections. 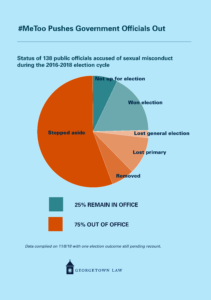 This past Tuesday, 27 of the accused officials ran for reelection, and 23 won their races. One race is still undetermined, pending a recount, and three officials were voted out. Two of these men lost their election to women candidates.

Despite the electoral wins this week, overall, 75 percent of the accused officials are or will be out of office by January, and another eight officials have yet to face reelection. Beyond losing political positions, a number of officials also face legal action, including seven civil lawsuits and 12 criminal charges.

“This type of accountability is unprecedented,” said Williams, the report author. “While this is promising, we still have a long way to go. There is evidence to suggest that the cases in this dataset are just the tip of the iceberg and many more women out there are enduring a toxic work environment.”

Download the full report: #MeToo and Public Officials: A post-election snapshot of allegations and consequences.