A Salvadoran man will be able to stay in the United States thanks to his two student-lawyers (now alumni), their mentors at Georgetown Law’s Appellate Litigation Clinic and a precedent-setting decision by the U.S. Court of Appeals for the Fourth Circuit.

Teresa Rubinger (L’19) and Elijah Staggers (MLS’16, L’19), who graduated in May, represented Melvin Josue Rodriguez Cabrera, who earned Legally Protected Resident status in 2014. The Bureau of Immigration Affairs revoked that “green card” in December 2017 after concluding that he had been convicted of a “crime involving moral turpitude” under Virginia law. 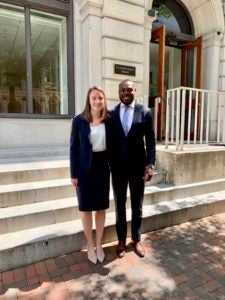 The Fourth Circuit overturned that order in July. In a case of first impression for the circuit, it ruled that the state-law crime to which Rodriguez Cabrera had pleaded guilty — engaging in gang-associated activity — is not a categorical crime of moral turpitude.

Now, Rodriguez Cabrera “gets a second chance to live his life,” Staggers said. “He gets his LPR status restored. And since this is a precedential opinion, it will help so many other people in the same situation.”

Rubinger and Staggers were two of the 16 students in the year-long clinic that ended in May. They worked under the supervision of clinic Fellow Anjali Prakash (LL.M.’19) and the clinic’s director, Professor Erica Hashimoto (L’97).

Hashimoto said the clinic agreed to represent Rodriguez Cabrera because the case “involved so many layers, and an issue of first impression for the Fourth Circuit.”

The students got the case in October and began digging into the record and researching the law.

“We spent hours and hours with (Prakash), figuring out what to say and how best to say it; and with Professor Hashimoto, who has so much insight into what an appeals court is likely to find persuasive,” said Rubinger, who argued the case at the Fourth Circuit in May. “I can’t begin to count the number of moots we did, among ourselves, the other clinic students, and finally other professors and outside attorneys.”

Rodriguez Cabrera, now in his early 20s, was arrested on suspicion of assault in 2016. In exchange for a suspended sentence, he pleaded guilty in state court to participating in gang-related criminal activity.

The Department of Homeland Security initiated removal proceedings, claiming that a gang-related purpose turns any offense into a crime of moral turpitude. The BIA agreed and ordered his deportation.

To overturn that order, the student-lawyers had to show a “realistic probability” that Virginia’s gang-related activity law applies to crimes that do not involve moral turpitude – what the Ninth Circuit, the only other appellate court to consider the question, had called “run-of-the-mill criminal conduct.”

Rubinger and Staggers “did a terrific job” of finding examples of relatively minor infractions that would qualify as gang-related activity under Virginia law – including trespassing on church or school grounds, if the trespassers were headed to a gang meeting, Hashimoto said.

The Fourth Circuit found that example convincing, writing that “no one can seriously contend” that trespassing en route to a meeting “is ‘inherently base, vile or depraved and contrary to accepted rules of morality.’”

BIA’s categorical approach was not tied to conduct but was based on impermissible factors like “the defendant’s identity or that of the individuals with whom he acted,” the court concluded.

The opinion came out on July 19, making it “a nice pick-me-up from studying for the bar exam,” Rubinger said.

They called Rodriguez Cabrera and he was “thrilled, and so grateful. You could hear the emotion in his voice,” she said. “To me, it underscored the importance of the clinic’s mission in taking these important appellate cases.”

The appellate level is “where precedent is made,” Staggers said.

“The government has a great deal of power. Even if it is acting in good faith, it may not be interpreting the law correctly,” he said. “People like Mr. Rodriguez Cabrera need someone on their side.”