Georgetown University President John J. DeGioia has many pictures in his office — including one of a young Georgetown graduate, Austin Tice, at Commencement 2002. The six-foot-two former Marine Corps captain, who had just received his diploma from Georgetown’s School of Foreign Service, was so excited that he embraced the university president. 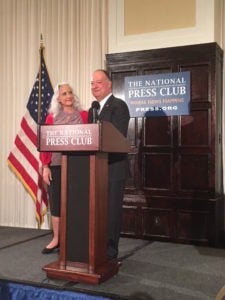 Debra Tice, the mother of missing journalist Austin Tice, with Georgetown University President John J. DeGioia at a reception at the National Press Club on August 14, six years to the day after Tice disappeared in Syria. (Photo courtesy of Reporters Without Borders)

“What I hope for is that we shall have a picture alongside of it, when Austin returns to us,” DeGioia told Tice’s parents, Debra and Marc — and an appreciative audience that included Georgetown Law Dean William M. Treanor — at the National Press Club on August 14.

After his second year at Georgetown Law in 2012, Tice traveled abroad as a freelance journalist to report on the crisis in Syria for organizations including the McClatchy Company, the Washington Post and CBS. He disappeared on August 14, 2012, just after his 31st birthday, and is believed to be held in Syria against his will.

“I want to make sure that people understand why this 2L law student, Marine Corps captain, [went] into Syria armed only with a camera — what motivated him,” Debra said, going over to a photo of Tice’s reflection, holding a camera, entitled “Self Portrait — April 14, 2012.” The photos, at the National Press Club this month, were exhibited at Georgetown earlier this year.

“Here he is, doing something that he was just learning how to do and he was so passionate and so excited to do it,” Tice’s mother said as she presented the photos. “He’s going to go into Syria, he’s going to go into a conflict zone with only a camera — because he has seen urban conflict firsthand. He doesn’t want this to happen in Syria. He understands the dream and the desire for reform.”

She showed photos of a little girl sitting under a tree, little boys riding their bikes. Then, the photos grow dark: a woman carrying groceries to her family on a bomb-cratered street. A little girl wounded by shrapnel. A little boy showing off his chest, sewn in half with sutures due to bullet wounds.

“We are asking for an end to [violence] and the beginning of healing…” Debra said, adding that it was “Austin’s deepest desire.” “I want you to join him behind the camera, to get a feel for his heart. Why did Austin go there? He just wanted to tell the story.”

McCarren said at the outset that the purpose of the event was not simply to mark the sixth anniversary of Tice’s disappearance and to recognize his outstanding photography. “We are all really here today to bring Austin Tice home,” he said. “We pledge at the Press Club to help make that happen.”

McCarren announced that Tice and his parents will be honorary members of the National Press Club; Marc Tice said the family is looking forward to the day when Austin will collect on that promise.

“The support of the media for one of their own who is in a terrible situation is incredibly important,” Marc said. “Spreading awareness…a number of officials from our government and even other governments tell us that they are impacted by the letters, the phone calls, the Tweets, the articles…. What we hear at the end of an interview is, what can we do, what can people do? Make your voice heard, tell other people…share about Austin’s situation.”

Audience member Gene Policinski, president of the Freedom Forum Center at the Newseum, looks after exhibits that include Austin Tice’s shoes, notebook and other personal items. An enormous #FREEAUSTINTICE banner is currently displayed outside of the Newseum (which a group of Georgetown Law 1L students will have the opportunity to tour with Professor Angela Campbell on Thursday, August 23, as part of Orientation Week). The exhibits receive nearly a million visitors a year. 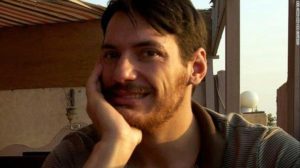 “We remind them that every day in this country and also around the world, there are journalists who risk their lives for the very important [job] of bringing the news to you,” Policinski said.