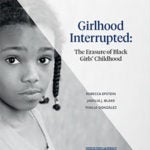 A groundbreaking study released today by Georgetown Law’s Center on Poverty and Inequality finds that adults view black girls as less innocent and more adult-like than their white peers, especially in the age range of 5-14.

The study, detailed in the new report, Girlhood Interrupted: The Erasure of Black Girls’ Childhood, is the first of its kind to focus on girls, and builds on previous research on adult perceptions of black boys. That includes a 2014 study led by Phillip Goff that found that, beginning at age 10, black boys are more likely to be viewed as older and guilty of suspected crimes than white peers.

Authors of the new Georgetown Law report adapted the scale of childhood innocence developed by Goff and colleagues to include items associated with stereotypes of black women and girls. They then applied the scale to a new survey on adult perceptions of girls. The findings showed significant bias toward black girls starting at age 5.

“What we found is that adults see black girls as less innocent and less in need of protection as white girls of the same age,” said Rebecca Epstein, lead author of the report and executive director of the Center on Poverty and Inequality at the Georgetown University Law Center.

“This new evidence of what we call the ‘adultification’ of black girls may help explain why black girls in America are disciplined much more often and more severely than white girls – across our schools and in our juvenile justice system,” said Epstein.

-Black girls need to be supported less than white girls.

-Black girls need to be comforted less than white girls.

The study applied statistical analysis to a survey of 325 adults from a variety of racial and ethnic backgrounds and educational levels across the United States. Across the four age brackets examined, the most significant differences in adult perceptions were found in relation to girls in mid-childhood (ages 5-9) and early adolescence (10-14), continuing to a lesser degree in the 15 to 19-year-old group. No statistically significant differences were found in the 0-4 age group.

Biases revealed by the study may shed new light on why black girls are consistently disciplined more harshly than white girls. The report authors point out that educators, school-based police officers and officials across the juvenile justice system often have significant discretion in their decision making, including for minor, subjective infractions such as dress code violations, disobedience and disruptive behavior.

Until now, few scholars have thoroughly investigated why black girls are subjected to differential disciplinary treatment, such as:

-Black girls are nearly three times as likely to be referred to the juvenile justice system as white girls.

-Black girls are 20% more likely to be charged with a crime than white girls.

-Black girls are 20% more likely than white girls to be detained.

The report authors call for further study into the adultification of black girls and its possible causal connections to negative outcomes across public systems, including education, juvenile justice and child welfare. They also recommend providing teachers and law enforcement officials with training on adultification to help counteract the negative consequences of this bias against black girls.

“These findings show that pervasive stereotypes of black women as hypersexualized and combative are reaching into our schools and playgrounds and helping rob black girls of the protections other children enjoy,” said report coauthor Jamilia Blake, an associate professor at Texas A&M University. “We urge legislators, advocates and policymakers to examine the disparities that exist for black girls in the education and juvenile justice systems and to pursue reforms that preserve childhood for all.”