Professor Mary Sarah Bilder, one of the country’s most accomplished historians with expertise in legal and constitutional history, delivered the 2019 Thomas F. Ryan Lecture at Georgetown Law on March 6.

Bilder, the Founders Professor of Law at Boston College Law School, traced the life of a little-known historical figure, Eliza Harriet O’Connor, in a lecture entitled “The Lady and George Washington: Female Genius in the Age of the Constitution.” O’Connor herself was a lecturer who began to speak in the 1780s, the very time that constitutions were being reformed in the United States and England.

Who was this remarkable woman? As Bilder explained — with slides to illustrate — Eliza Harriet was born in Lisbon, Portugal. She grew up in England with an elite education and married an Irish law student, John O’Connor, before moving to America. They settled in New York in 1786, Alexandria in 1788, Charleston in 1790, 1792 in Savannah. The founding of Georgetown, Bilder noted, coincided with O’Connor’s story and it is possible that she was on site in 1789, as her husband attempted to start the Potomac Magazine.

In each city, she gave lectures on women and politics, among other subjects, and attempted to open schools for women and girls, with varying degrees of success. She lectured in Philadelphia in the summer of 1787, possibly influencing those who would draft the U.S. Constitution. “She insisted that she was an example to be imitated and improved on by others, and I believe her example mattered,” Bilder said. 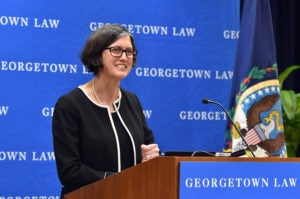 Though reactions to her speeches were mixed among male reviewers, even George Washington himself grudgingly acknowledged O’Connor as “tolerable” when he heard her speak at a charity affair. “This is what [Jane Austen’s character] Mr. Darcy says of Eliza, so I judge her performance was a relative success,” Bilder said.

While some women could vote in New Jersey throughout the 1790s, rapid advancements in women rights during this time was not to be. Men lashed back in writings and lectures, wanting to restrict women to the traditional role of wife and mother. And prejudice, Bilder said, “began to take constitutional form.”

Under the guise of eliminating voter fraud, women lost the vote in New Jersey in 1799. A wave of state constitutional exclusions meant that by 1807, only free white men could vote.

“Like people of color, white women found themselves constitutionally excluded, because they were not white men,” Bilder said.

Georgetown Law’s Ryan Lecture, named for the late Thomas F. Ryan (L’76), is given annually to honor Ryan’s memory and enrich the education of Georgetown students and faculty. “This lecture is one of the jewels every year in the Law Center’s academic program,” said Dean William M. Treanor. “When Professor Bilder accepted our offer to deliver this lecture, I was beyond delighted.”

“It’s a commonplace that gender is virtually invisible in the United States Constitution,” commented Associate Dean John Mikhail, as he introduced Bilder. “We know of course that women were among the people of the United States who were present at the founding — thinking, feeling, reading, writing, debating aspiring, making demands on themselves and others…It is also clear that we cannot have an adequate understanding of those activities, unless we take the time and effort to investigate.”

Mikhail noted that few topics “are more in need of fresh insight and critical inquiry than the role, status and hidden agency of women at the time of the American founding.”