On April 11, Georgetown Law’s Center for the Constitution hosted the inaugural Thomas M. Cooley Judicial Lecture with Judge Joan Larsen of the U.S. Court of Appeals for the Sixth Circuit.

Larsen’s lecture, “Respecting Local Control: State Law in the Federal System,” encouraged lawyers and judges to pay closer attention to state constitutional law, recounting her own experience as a justice on the Michigan Supreme Court and harkening back to Cooley’s advocacy for local control.

“State courts are too often treated in law schools and in elite legal circles as if they were the little siblings of their more sophisticated federal brethren,” she said. “But there can be no denying, even today, [that] the work of state courts matters.”

The Cooley Lecture was among the highlights of a conference co-sponsored by Georgetown Law’s Center for the Constitution and the Federalist Society that also featured the awarding of the second annual $50,000 Cooley Book Prize. This year’s recipient was Harvard Law Professor Richard M. Fallon Jr. for his book Law and Legitimacy in the Supreme Court (Harvard University Press, 2018). 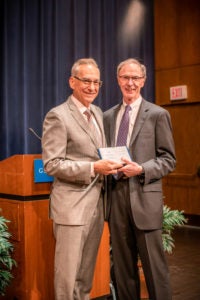 The two-day event, which included a day-long symposium discussing Fallon’s work, honored the legacy of renowned 19th-century legal scholar and jurist Thomas McIntyre Cooley, a longstanding chief justice of the Michigan Supreme Court and dean of the University of Michigan Law School.

“He’s not just a very influential and important jurist, but one of the great legal thinkers in the history of the country,” said Georgetown Law Dean William M. Treanor in his opening remarks. “This inaugural series recognizes his profound contribution to American jurisprudence and legal theory.”

Professor Randy Barnett, director of the Center for the Constitution and the Carmack Waterhouse Professor of Legal Theory, kicked off the conference with the awarding of the book prize to Fallon. “[F]ew scholars have tried to unpack the different conceptions of constitutional legitimacy in any systematic way,” Barnett said. “This wonderful book fills that gap by addressing the question of what it is that makes a constitution, or a court, legitimate in the sociological, moral or legal senses of that term.”

Expressing his deep appreciation, Fallon praised the center for “its commitment to open, honest intellectual exchange.” He also looked forward to the next day’s symposium discussing his book. “I’m thrilled by the distinction of the panelists and the papers,” he said, praising each contributing scholar in turn: Scott Soames, professor of philosophy at USC; Columbia Law Professor Gillian Metzger; Princeton Professor of Politics Keith Whittington; and Georgetown Law Professor Lawrence Solum. The papers and Fallon’s response will be published in a special issue of the Georgetown Journal of Law & Public Policy.

In the inaugural Cooley Lecture, Judge Larsen offered lessons for federal judges, drawing from her own dissent in the recent case Lindenberg v. Jackson National Life. “If we are serious about the idea that state courts should protect and interpret the unique heritage of the various state constitutions, then federal judges need to tread with special care,” she said.

“Here at the very least state courts are the starting line-up. We federal judges sit on the bench — in the basketball sense.”

Regarding Cooley’s legacy, Larsen concluded: “If the resurgence of Cooley studies has any lasting significance, I hope it will … remind us not only of the forgotten prominence of Thomas Cooley, but also of the respect of we are constitutionally bound to pay the state and local institutions that he served.”