Federalist Society Hosts “Beyond Confirmation: How Justice Kavanaugh Will Impact the Supreme Court”

Professor Randy Barnett at "Beyond Confirmation: How Justice Kavanaugh Will Impact the Supreme Court," hosted by the Federalist Society on October 10.

“ What happens when you replace a Justice Kennedy…with a Justice Kavanaugh, who is an originalist textualist? All of the sudden, you might start to see, for the first time in our lives, originalist majority opinions,” said Professor Randy Barnett, who directs Georgetown Law’s Center for the Constitution — who suggests that law professors and litigators might have to start taking originalism more seriously.

“With three out of five, you have a majority of the majority, of the conservative bloc, [who are] originalists. I predict that’s going to change how majority opinions are written…it will change how oral arguments are done…it’s going to change the way briefing is done…it will change the way lower court opinions are decided…and if all that happens, it means that law schools might have to start teaching law students how to do originalist arguments in their actual classes, not Federalist Society…sponsored side events.” 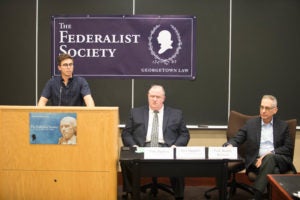 The Georgetown Law student chapter of the Federalist Society hosted “Beyond Confirmation: How Justice Kavanaugh will impact the Supreme Court” on October 10. Barnett, Tom Jipping of the Heritage Foundation and Ilya Shapiro of the CATO Institute explored how Justice Brett Kavanaugh might shape the Supreme Court, and how the Court might differ from one with Justice Anthony Kennedy.

“The separation of powers is central to our Constitution…the role of the judiciary is to say what the law is, not what it should be,” said Peter McGinley (L’19), as he introduced the three panelists. McGinley co-heads the Georgetown chapter of the Federalist Society with Ryan McNulty (L’19).

Barnett noted that Justice Kavanaugh is the third self-professed originalist textualist justice to be named to the Supreme Court — possibly the fourth, counting Justice Samuel Alito who considers himself an originalist but has yet to write an originalist opinion. Originalism is the view that the meaning of the text of the Constitution must remain the same as when it was enacted, until it is properly changed by constitutional amendment.

“Justice Scalia’s originalism was severely qualified by his commitment to stare decisis, which meant he was constantly ruling in ways that was contrary to the original meaning of the text because he said he was bound to do so by precedent,” Barnett said. [This] is entirely a reasonable position to hold within the conservative legal movement, but it only [made] him a sometime originalist.”

“The idea that the appointment of one judge could have that kind of impact in either direction…is hyperbole of a kind I have never seen before,” he said. Instead, the appointment presents “an opportunity to be further engaging in a very important debate about the role of the courts in our system of government.”

The level of understanding about the judiciary, he noted, “is probably at an all time low.”

“We’re seeing the culmination of several trends where you have clear, distinct, wide separation in interpretive theories that map on to more polarized and ideologically sorted political parties…” he said. “The only solution really is not to tweak the confirmation process or term limits or increasing the size of court…those are kind of rearranging deck chairs on the Titanic. The real solution to the problem for this and other things we are facing in our political discourse is [decentralization] of power in Washington. Every government institution has too much power…the only way to ultimately depoliticize our judicial nominations is to make them less important.”