At first glance, the case might an unlikely choice for Georgetown Law’s Appellate Courts Immersion Clinic: A bartender and her middle-aged mother appeal from the dismissal of their lawsuit for false arrest and malicious prosecution, after being jailed for 18 hours on suspicion of serving alcohol to 18- and 19-year-old cousins at a Brooklyn, New York nightclub.

To clinic director Professor Brian Wolfman, though, the fundamental civil rights at stake and the implicit social injustice of the situation clearly match the clinic’s mandate of taking on “impact” appeals involving a significant public interest.

“The injuries these women suffered are significant, even if they are not life-threatening,” he said. “Some people might shrug it off as a small mistake. But it’s a major indignity, and why do people in some neighborhoods never face these indignities, while people in other neighborhoods do?”

Before their arrest, the mother and daughter “quite rightly viewed themselves as upstanding citizens; they never had any problem with the law,” Wolfman said. He asked that their names be withheld because they are now fearful of police and “mortified” by their arrest.

‘WHAT IS SHE DOING HERE?’ 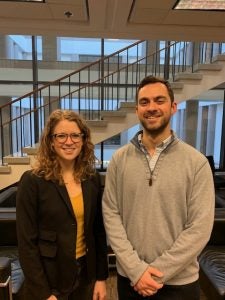 The daughter, a widow, was working two jobs to support herself and her grade-school child. A retail worker by day, she tended bar at the Brooklyn restaurant and dance club at night. Her mother lived across the street from the club, in a community populated largely by people of Caribbean descent.

According to the brief filed under Wolfman’s mentorship by Maxwell Hamilton (L’20) and Kalen Pruss (L’21) in the U.S. Court of Appeals for the Second Circuit, the mother brought her daughter dinner at the club shortly before midnight on March 18, 2016, and stopped to chat for a while.

While the mother was there, police arrived to conduct a “business inspection”—ostensibly, to ensure that the club was not over capacity. Police ordered everyone out and counted those that chose to come back in.

Minority communities consider these peculiar inspections to be a form of harassment, Hamilton and Pruss said.

“It’s not in the record, but it’s an important part of the context,” Hamilton said.

While the officers were at the club, they spotted the teenaged cousins holding glasses of alcohol. They arrested the two men, the bartender and her mother, even though the arresting officer — who referred to the mother as an “old lady” — repeatedly asked, “what is she doing here?”

The teenagers were released from custody after signing statements prepared by police, which implicated the bartender and an “old lady.” The women were held until the evening of March 19, when a judge dismissed all charges against the mother, told the bartender to “stay out of trouble” and entered an adjournment in contemplation of dismissal, under which the case was dismissed six months later.

In 2017, the women filed suit for false arrest and wrongful imprisonment in federal court in Brooklyn.

That court granted the officer’s motion for summary judgment based on qualified immunity, holding that the officer had reasonable grounds to suspect both women were violating the law.

Wolfman and clinic fellow Bradley Girard (L ’14) read about the ruling on Westlaw and contacted the women’s attorney, Amy Rameau of Brooklyn. She does not handle appeals but co-counseled with the students and Wolfman on the Second Circuit brief.

The brief says the lower court erred by crediting the officer’s version of events and ignoring factual disputes that should have precluded summary judgment.

“At a bare minimum, an officer who makes an arrest must have a particularized suspicion that the person committed a crime,” Wolfman explained. “Here, there was none.”

Pruss said the mother’s case was particularly strong; and, while the bartender was the only one on duty that night, she was “clearly not the only one who could have supplied alcohol to an underage customer.”

If the presence of the underage drinkers gave police reasonable grounds to arrest the bartender, then bartenders “at every college bar in America” are at risk, Hamilton said. “A class- and race-based double standard exists depending on which bar, which clientele.”

Rameau had high praise for Pruss, Hamilton, and the clinic.

“The students are wonderful. Their attention to detail is phenomenal,” Rameau said. “Under Professor Wolfman’s supervision, they turned out a well-researched, well-thought-out brief in very little time.”

Pruss attributed the quality of the brief to repeated edits and substantive feedback from Wolfman, Rameau and a workshop of other student reviewers in the clinic. Pruss said she took great satisfaction from both the “process and the product.”

Hamilton, who will head to Akin Gump Straus Hauer & Feld after graduation, said the experience left a deep impression on him.

“Qualified immunity exists to protect reasonable decision-making by police—but too often, courts allow ‘immunity’ to swallow ‘qualified’,” Hamilton said. “Actions have consequences, and it’s important to establish limits, so that a person whose rights have been violated can vindicate those rights. I hope our brief provides a vehicle for the Second Circuit to clarify those limits.”