“When the decision came out, I was late to work, but I had to read the whole thing — because it was so heartwarming…” Chandy said. “The amount of dignity and respect…that was included in that decision is so needed by people in the U.S. right now, in the LGBT community.”

Prior to the Court’s decision, same-sex sexual contact was illegal under Section 377 of the Indian Penal Code and punishable by fines or prison terms of up to ten years — or even life. The September 2018 verdict, which overturned a 2013 decision upholding the law, is a major step forward for LGBTQ rights in India.

Guruswamy highlighted the bravery of the plaintiffs in the case. With the 2013 loss still fresh in the minds of many, the outcome of the 2018 challenge remained in doubt as the case progressed. And yet the plaintiffs — including many prominent Indians from various walks of life — were willing to share their stories, though the lawyers could not promise them a win, safety or security.

“These [people] with rich lives, active professional lives, were sharing all of this information with 1.7 billion people…,” Guruswamy said. “I think that makes you a citizen who should be embraced by the constitution.”

She hoped that this case will serve as an important turning point for LGBTQ rights protection by the courts in India. Too often in the past, LGBTQ individuals were “invisible” both in the eyes of the law and in Indian society. “LGBT Indians did not go to court for anything...” Guruswamy said.

Both Guruswamy and Katju hailed the expansive grounds on which the Supreme Court’s decision rested: the Court based its decision not just on privacy grounds but also on the Indian Constitution’s protections of the right to equality under the law.

“We know that this case is a foundation, and that foundations are there to be built upon,” Katju said. And to the future lawyers in the room, the talk was a seminar in activist lawyering: “You have wonderful skills and training, you can find a solution… Litigation, for me, gives me hope. I can change something in a practical, tangible way.”

“Menaka and Arundhati both went into the weeds on Indian constitutional development, and also gave a master class on Supreme Court advocacy,” Kellogg said. “The two of them really showed what world-class legal advocacy is all about.”

On February 6, Ambassador Kazutoshi Aikawa, the Deputy Chief of Mission at the Embassy of Japan in Washington, D.C., addressed the Georgetown Law community on “the U.S.-Japan Partnership and Japan’s Foreign Policy.” Aikawa highlighted the strength of the relationship between Japan and the United States and reiterated Tokyo’s deep commitment to continuing to build closer economic, security and diplomatic ties with Washington. 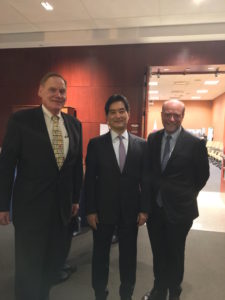 The relationship between the two countries, he noted, is built on a solid foundation of people-to-people contacts stretching back to the 19th century — as well as a shared commitment to democracy and the rule of law. At a time when geopolitical tensions are on the rise in Asia, U.S.-Japan ties serve as a bedrock of stability for the United States, for Japan and for the Asian region as a whole.

Aikawa discussed the U.S. security presence in Okinawa; Japan’s views on the Trump Administration’s efforts to push North Korea towards denuclearization; and Japan’s successful efforts to complete the Trans-Pacific Partnership trade agreement. He noted Prime Minister Shinzo Abe’s call to the international community to come together at the 2019 G20 Summit — to be held in Osaka, Japan, in June — to create a new global framework on data governance.

“Georgetown Law has a long history of engagement with Japan, stretching back many decades,” said James V. Feinerman, the James M. Morita Professor of Asian Legal Studies and the faculty director of the Georgetown Center for Asian Law, who hosted the discussion. “Ambassador Aikawa’s visit was a chance for us to renew those ties, and to hear directly from a senior Japanese official on the status of the U.S.-Japan relationship.”