If anyone at Georgetown University’s 2019 Women’s Forum, held at the Walter E. Washington Convention Center on March 28-29, had any doubt that the event would be a smashing success, Georgetown Law Professor Hillary Sale put those doubts to rest in the first minutes of the opening discussion, “From C-Suite to SHE-Suite.”

“All of us can control only one thing on a day-to-day basis and that is what we choose to do for ourselves,” Sale said, moderating a panel with three executives at major private and non-profit companies. “We can choose to be leaders, we can choose to take care of our peers, and we can choose to grow.”

Those who attended the Forum had chosen well: Over the next two days, they were treated to a range of conversations offering career advice, insights into the future of work, and networking opportunities with the speakers and other Georgetown alumnae.

Sale began by defining self-advocacy, a core component of her Law Center seminar on Women and Leadership. It’s not just moments like negotiating a job offer or a raise, but “actually a much larger concept,” she said. Self-advocacy happens year-round and every day.

“It’s about building relationships, developing opportunities and thinking consciously about the ways in which you can advocate for yourself on a daily basis — and for others — and how you can be more strategic about that,” she said.

Juliette Pryor (L’91, G’91), senior vice president, general counsel and corporate secretary at Cox Communications, stressed the importance of relationships, even as new ones were being built throughout the forum.

Pryor noted that career advancement doesn’t start with asking for a promotion or raise, but with translating one’s value into language another person can hear and understand. That means being able to understand and articulate one’s own value, and then communicating that to the right audience. She highlighted what kinds of support and guidance she could offer to company leaders during her career, subtly showing what she was capable of.

Even for people who aren’t naturally outgoing, Pryor said, self-advocacy is still within their grasp.

“You can be a self-advocate in quiet ways, in one-on-one conversations,” she said.

Sale, who also led a discussion on self-advocacy on Friday with Latham & Watkins’ Michele Johnson (L’98), acknowledged that women face barriers outside of their control, from discrimination and bias to outright “bad behavior.” “The power of self-advocacy is undeniable — and learning to be a strong self-advocate is an invaluable skill,” Sale said.

The Next Generation of Work

What will the barriers be for women, as the labor market shifts and evolves? In “Exploring the NextGen of Work,” Maya Raghu (L’98), director of Workplace Equality and senior counsel at the National Women’s Law Center, noted that female workers are overrepresented in low-wage jobs, which could make them especially vulnerable as automation and technology continue to shape the workplace.

“If people are going to be losing some jobs because of the robot apocalypse, where are those people going to go?” Raghu asked. “If they don’t have skills, are they going to be able to get training to get into the higher quality jobs that we will hopefully be creating for the new economy?”

Without those onramps to higher-skilled jobs, she warned, “they’re just going to be pushed further into the other kinds of low-wage work that has traditionally been done by women, such as caregiving.” 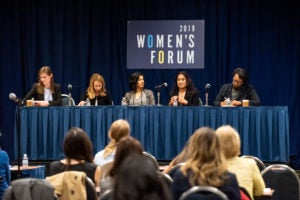 Even when women are able to take advantage of new-economy jobs, such as driving for ride-sharing apps, they face unique vulnerabilities due to their gender, she said. Picture a female driver whose passenger is harassing her: If she kicks him out of the car because she doesn’t feel safe or doesn’t want to deal with his harassment, he can retaliate by giving her a negative rating. That rating will lower her overall score, which in turn can limit her earnings opportunities, in what Raghu called “the dark side” of these technological advancements.

While the conversations are happening, there is still a long way to go, said Elizabeth Alexander (L’08), senior managing director at FTI Consulting Strategic Communications. Alexander spoke at “Women’s Leadership in the Era of #MeToo,” moderated by Rosemary Kilkenny (L’87), Georgetown University’s vice president for Institutional Diversity and Equity.

Alexander presented new data from a survey of 5,000 women and 1,000 men on harassment at work, which found 28 percent of women across five industries — finance, tech, legal, healthcare, and energy — had experienced unwanted physical contact in the workplace. Of the women who had either experienced or witnessed harassment, 40 percent did not report this to management. Women in the legal industry had the highest level of non-reporting: a full 50 percent did not report.

“Women who you would think would be the most knowledgeable of their individual rights, of their legal rights, were the least likely to report,” said Alexander. Women who’ve put in hundreds, if not thousands, of billable hours are reluctant to risk not making partner by reporting a colleague at their firm. Alexander has advised major corporations in the wake of harassment revelations; her advice is to go beyond what the law requires, and make a genuine effort to change the culture.

“There’s power in this #MeToo movement that businesses are only starting to feel, but if they ignore [women’s voices], they’re going to be doing so at their own peril,” Alexander said.