In an academic lecture on events surrounding the 1787 drafting of the U.S. Constitution, Georgetown Law Dean William M. Treanor showed the Law Center community how much he enjoys scholarship and teaching — in addition to serving as the school’s 16th dean.

Dean Treanor’s speech, “The Case of the Dishonest Scrivener: Gouverneur Morris, the Creation of the Federalist Constitution, and its Loss,” followed his investiture as the Paul Regis Dean Leadership Chair in Hart Auditorium on October 16. 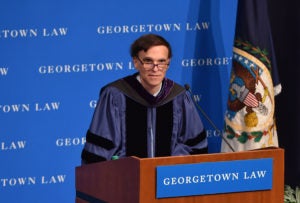 Chief Judge Robert A. Katzmann of the U.S. Court of Appeals for the Second Circuit.

The event was attended by Georgetown University President John J. DeGioia and such distinguished guests as Chief Judge Robert A. Katzmann of the U.S. Court of Appeals for the Second Circuit, who introduced Treanor onstage in Hart Auditorium; Agnes N. Williams (L’54), whose generosity has helped create the Williams Professorships and the Edward Bennett Williams Law Library; Georgetown Law faculty, staff and students; and members of Treanor’s own family: Allison Treanor, his wife; and Liam and Katherine Treanor, his children.

The Dean Leadership Chair is named after the late Paul Regis Dean, who is considered the “founding dean” of the modern law school, having served as the Law Center’s 10th dean from 1954 to 1969.

The Paul Regis Dean Leadership Chair will remain with Treanor, and with all subsequent deans of the Law Center, as long as they serve as dean. The honor was most recently conferred on Dean Emerita Judith Areen, whose historic deanship ran from 1989 to 2004. Areen also served as interim dean in 2010, before the arrival of Treanor from Fordham Law. 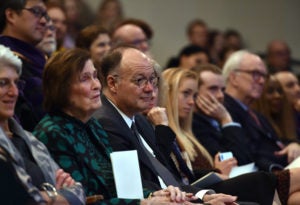 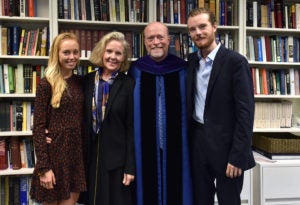 What unites Treanor’s life as a law school dean, scholar, and public servant, Katzmann said, is “the centrality of law and justice; the importance of academic inquiry and debate; the value of educating the whole person; and a commitment to the view that each person is important and should be nurtured and mentored to realize his or her potential; the need to promote diversity, the importance of making the law school run well so that all other goals may be served.”

If it is rare for a law school dean to serve nearly an entire decade, it is also rare for him or her to serve while engaging in pathbreaking academic scholarship. Treanor’s academic and intellectual life has thrived while raising $40 million last year; breaking fundraising records in each of the past four years; and hiring 60 new full-time faculty members, among other accomplishments. 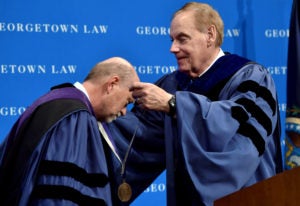 “Bill truly serves to make this world a better place,” Henning said. “Like any good servant leader, [Dean Treanor] has used his resources, his power, and his influence to actualize what we mean at 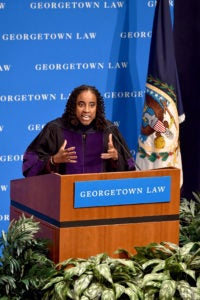 Georgetown about social justice…to ensure access and opportunities for a wide range of students interested in the legal profession, worked to guarantee diversity and inclusion…and to broaden our footprint on the local, national and international arenas.”

Mikhail noted that Treanor, who has a Ph.D. in history, has been recognized as one of the nation’s most cited legal historians. “Bill is an extraordinary scholar who has made seminal contributions to a dizzying number and variety of topics.”

Onstage in Hart Auditorium, Treanor displayed his excellence as a scholar and teacher as he described how the U.S. Constitution, once drafted, went through some suspicious editorial changes in a Committee of Style and Arrangement. A conveniently placed comma in the General Welfare Clause became a semicolon; “We the People” of the states became “We the people of the United States”; lower courts become mandatory in the judicial vesting clause; added language creates the basis for judicial review, and deleted language removes onerous limitations. The person responsible for the changes? Pennsylvania Delegate Gouverneur Morris. 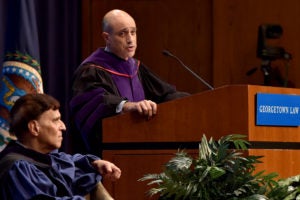 “In each case, he’s changed [the Constitution] to get the end that he wants, and the Federalists use it to argue for what they want,” Treanor said.

Until now, Morris’s honesty (or dishonesty) as a scriveneur has never been adequately explored among scholars. Treanor’s recent article, he says, “is the first to focus on the committee’s draft and the ways in which it departed from the text the convention had previously approved and to examine the legal significance of those important changes.”

Indeed, as he explained in the October 16 lecture, Morris’s edits have impacted Supreme Court cases a century or more later — as four decisions in the past 50 years have grappled with whether to consider the Constitution that went into the Committee or the Constitution that came out of it: “The common understanding today is totally against the Federalists…he’s given language that the Federalists rely on, and we ignore that today.”

Treanor drew laughter in the crowd when he revealed that Morris was a “serial philanderer” whose imposing 6-foot-4 stature was once used as a life model for a statue of the more “pear-shaped” George Washington. But on a serious note, Morris was one of few delegates to condemn slavery at the Constitutional Convention, he said, and Morris remains a largely forgotten genius. “One of the enduring messages of understanding Morris is that while all the other founders cared about their place in posterity, “ Treanor said, “he cared more broadly — in part about the nation, and in part about…personal things.”

Dean Treanor’s article may be read at this link.

Georgetown Law Dean William Treanor will be installed as the Paul Regis Dean Leadership Chair on Oct. 16 at 4 P.M.