Ten years after the worst financial collapse since the Great Depression, our collective memory of the damage caused by the crisis has faded.

Gone are the daily stories of the searing political, economic and emotional losses Americans sustained in 2008 and beyond. More than 23 trillion dollars of wealth disappeared during the crisis years. By 2010, 42 million citizens had fallen into poverty, the largest number since the Census Bureau first published these estimates in 1959. The San Francisco Federal Reserve found that the crisis imposed lifetime economic losses of $70,000 upon every American, losses that are likely to be permanent. 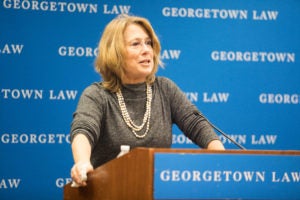 “It wasn’t a natural disaster, nor an unexpected storm. It was instead the result of human action and inaction, not of Mother Nature or computer models gone haywire. The captains of finance and the public stewards of our financial system ignored warnings and failed to question, understand, and manage evolving risks within a system essential to the well-being of the American public. Theirs was a big miss, not a stumble.”

The central reason for organizing this conversation among experts and creative thinkers about the lasting economic, social and political dislocation, she said, is to explore whether we are headed for another financial crisis, despite the changes to bank regulation. The conference was prompted by new warning signs that financial deregulation, risky lending standards and unregulated derivatives have returned.

“Ten years later, our collective memory of the damage caused by that crisis has largely faded,” she said. “We are concerned that there is potential for new damage from a dangerous period of financial crisis amnesia.”

Participants included Sheila Bair, former chair of the FDIC, who delivered a keynote address on “Forgotten Lessons of the Financial Crisis,” that included a look at the 2010 Dodd-Frank Wall Street and Consumer Protection Act; John C. Bogle, founder of The Vanguard Group (via a prerecorded interview with Jordan); as well as Georgetown Law Professors Adam Levitin, Anthony Cook, 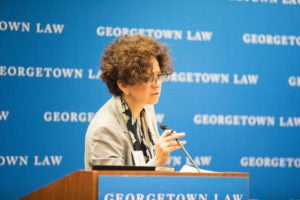 “I was in New York, and I think everybody remembered it as a time of almost palpable panic,” said Georgetown Law Dean William M. Treanor, who introduced the conference. “I remember walking down the streets and how eerily quiet it was…there was a sense that we were on the cusp of the Great Depression. Every sector was grappling with the day that Lehman Brothers filed for bankruptcy…the Dow went down seven percent…it obviously has transformed economics [and] economic regulation; it’s transformed politics…”

Treanor called Jordan “one of the great voices in our time for justice. In every dimension, she has fought to make this world a more just place. One great focus of her work has been in economic justice and civil rights.”

Jordan spoke to Georgetown Law before the event. “Developments over the last year and a half suggest that banking regulators have forgotten about the disaster of deregulation,” she said. “We hope to raise public awareness that we’re entering a period in which the problems we thought were solved have not been solved.”