Paul Butler, the Albert Brick Professor at Georgetown Law, is in the spotlight with a book published by The New Press on July 11. We sat down with Butler, a former federal prosecutor with scholarly expertise in criminal law and racial justice, to discuss how the criminal justice system harms black men and suggesting recommendations for change (excerpts of the interview follow). Butler also discussed his book, entitled Chokehold: Policing Black Men with Kojo Nnamdi at Busboys and Poets on Wednesday, July 12; Georgetown Law covered the event live.

How would you describe this book to someone who has no knowledge of the history of race in America?

Chokehold is a book about black men and how the law treats us. It’s about state violence against black men, including violence by the police, but I also interrogate violence by black men, mainly against each other. The idea is that many of the problematic features of U.S. criminal justice — mass incarceration, erosion of civil liberties and brutal policing — are based on fear of African-American men. In the criminal context, the Supreme Court has given the police what I call “superpowers,” with the understanding that these powers are to be deployed against African-American men. 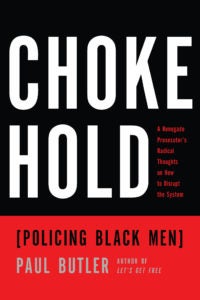 Was there one specific impetus for the book? Or has this been gradually taking shape in your mind?

When I was at law school [at Harvard] I knew I wanted to be a public interest lawyer and I developed an interest in criminal law. After law school I clerked and then I worked for Williams & Connolly, a white-collar criminal defense firm, where I was schooled by some of the country’s best lawyers on how to confront the power of the government in defense of my clients. I wanted to get more trial experience, so I went to the Department of Justice — where I was detailed to the U.S. attorney’s office here in D.C., which is the local prosecutor. That was an amazing experience, both personally and professionally. I got to go to court almost every day; I had a lot of jury trials. I had all this power representing the United States of America, but I was using that power to put African-American people, especially young black men, in prison. That ultimately led me to leave the prosecutor’s office. I didn’t go to law school to put black men in prison, and that’s basically what my job was.

That really opened up this area of research, and my scholarship has focused on the intersection of race and crime. My first book, Let’s Get Free: A Hip-Hop Theory of Justice (The New Press, 2009) was about mass incarceration. I focused on the way that in hip hop music, young African-American men were telling of their experiences with the criminal justice system and making important recommendations for how our communities could be made safer and our citizens made more free. That book did well, and the publisher wanted me to do another book about criminal justice. It started out as a guide for African-American men who are in the system. There’s advice about how not to be stopped by the police; how if you are stopped, not to be arrested; and if you do get prosecuted, how you should proceed, what you should tell your lawyer, how to select a lawyer, whether to go to trial.

While I was working on that book, Trayvon Martin was killed in Florida. And then Michael Brown was killed in Ferguson. And Eric Garner was killed in Baltimore. That dramatically shifted the focus of the book, because some of these young men were doing everything right. Trayvon Martin was on his way to his dad’s house after buying some candy from a grocery store. And so while it still seemed important to make recommendations for African-American men about how to avoid the system, clearly the problem was much larger than that. In some ways, it was out of the control of individual black men. No matter what you do, it seemed like you were at risk of being the victim of violence by the police. And so I wanted to think more broadly about what was going on — not just with young black men but with our society and our laws that led to all of these people being killed.

What are your conclusions?

There are some evidence-based practices that can make it safer for black men and for the larger community. For the problem of police shooting African-American men when they wouldn’t shoot other people, I have two recommendations about who ought to become a police officer. One is that half of every police force should be women. Now, less than 10 percent of officers are women. We know that women are much less likely to use force, including deadly force, than men are, and that they are every bit as effective as law enforcement officers. Many women officers have a skill set in terms of de-escalating tension and conflict that many male officers don’t have. I think that when we look at the evidence and data on women cops, they’re more likely to be in that necessary frame of thinking of their work as guardianship and protection, rather than being warriors and regarding the communities that they patrol as enemies, as unfortunately too many male cops do.

The other recommendation is for officers to be required to have college degrees. Again, this is evidence-based research that demonstrates that when officers are better educated, especially when they have college degrees, they’re less likely to be racist, they’re less likely to shoot unarmed people and they’re better at resolving disputes. We don’t actually need the number of cops that we have now — we could reduce in many of our cities the quantity of police officers and improve the quality by having higher standards for who is allowed to walk around with a gun and this awesome power to arrest people. So I think that those two steps would go a long way in terms of reducing police violence against citizens.

I recommend that we start moving toward prison abolition. Abolition sounds startling when you first hear about it, because we have this idea that we need prisons to keep us safe. But when we ask, what does that mean, I think it means we want to incarcerate people who are likely to cause harm if they’re not incarcerated, and we want people who have done harm to be accountable. The question we need to ask is, does prison accomplish any of those goals? When you look at the research, when you look at the evidence, the answer is, prison doesn’t do a very good job of either keeping us safe or making people take responsibility for the harm that they’ve done…people who are locked up rarely get the services and support they need to have positive outcomes when they come home.

Georgetown Law is the leading academic home for this new, exciting idea of abolition, and it’s mainly because of my colleague, Professor Allegra McLeod, who has done important and groundbreaking work in theorizing abolition. She notes that it’s a gradual process. I don’t, and she doesn’t, endorse opening up every prison door tomorrow and letting everybody go. People ask, what about hard core criminals? If we look at people who are in prison for murder or for sex crimes, that’s less than 5 percent. And so even if we set those 5 percent aside and say, well, let’s focus on this other 95 percent, what are the costs and benefits of treating their issues in ways other than locking them in a cage? We could go a long way at reducing the prison population, keeping families intact and making our neighborhoods safer. And we’d save a lot of taxpayer dollars — it costs at least 25 thousand dollars a year to lock up folks. Multiply that by the nearly 2.5 million people who are locked up and imagine how much more productively we could use that money to invest in resource-deprived communities.

Why did you go to law school initially? Did you envision yourself a prosecutor?

I went to law school with the idea that I would do public interest law; being a prosecutor was the last thing on my mind. Growing up as a black man in Chicago, I had a number of unpleasant experiences with police officers. But as a defense attorney at Williams & Connolly, I saw that a lot of my practice involved working with prosecutors…I thought, maybe if I’m on the other side, if I’m the person who has this discretion, maybe I could use that power to improve the system, to make things fairer. It’s a classic idea of working from the inside. I’ve described it as going in as an undercover brother, trying to change the system.

But what I found is that rather than change the system, the system changed me, and I became a law enforcement enthusiast. In some ways it was good in that I developed a profound respect for how difficult police work is and how brave you have to be to be a cop. I have much respect for people who do that work. At the same time, it turned out that as a line prosecutor, I didn’t have the power that I expected…our politics, like our criminal justice system, are infused with race, and I suggest, infused with fear and concern about African-American men. And so the breaks that I hoped to be able to give people accused of crime, or even people who were guilty, I wasn’t allowed to do.

You have your own unbelievable story of being arrested — when you were a prosecutor.

I was a junior lawyer on the most high-profile case in the Department of Justice, working on the prosecution of a U.S. senator for public corruption, and I got arrested for a crime that I didn’t commit. It was a silly dispute over a parking space. My neighbor told the police that I ran up to her, pushed her and then ran away. The police came to my home and arrested me without asking any questions. At the trial, her own tenants testified…that she was not a stable person, known for lying. Any kind of rudimentary investigation by the prosecution would have revealed that…but I ended up going to trial.

The jury deliberated for less than 10 minutes before it returned its verdict of “not guilty.” I had lots of resources that most defendants didn’t have. I had the best lawyer in town…I had legal skills. I had prosecuted people in the same courtroom where I was being prosecuted. As a lawyer, somebody who graduated from elite schools, I had a kind of social standing. I was innocent, but the fact that I was innocent didn’t seem to be the most important reason why things worked out well for me. So that made me start thinking in a more critical fashion about the work that I was doing as a prosecutor…it opened my eyes. Being prosecuted made a man out of me, it made a black man out of me, and I felt connected in a different way to my brothers than I had before. I wanted to think more critically about what our criminal justice system is doing, the way that race matters in our legal system.