At the Workers’ Rights Institute’s inaugural reception on October 31, Executive Director Mark Gaston Pearce described WRI as “among the latest additions to the multifaceted and amazing Centers and Institutes dedicated to address injustice and promote humanity here at Georgetown[.]” 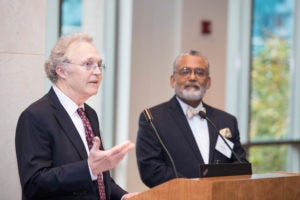 “Through the benefit of donor Stephen R. Bruce (L’79), and the enthusiastic support of Georgetown Law Dean William M. Treanor, as well as the labor and employment and justice community, the Workers’ Rights Institute will endeavor to bring innovative legal and policy initiatives to support workers’ rights and to empower the nation’s most vulnerable workers to access labor protections,” said Pearce — who also recognized Professor Jamillah Bowman Williams, the faculty director of the Institute.

“This is an event that I have been looking forward to for a long time,” said Treanor, adding that Georgetown Law’s 19 Centers and Institutes are grappling with the major issues of the day. “We try to think through, what are the areas where we can make a difference? What are the areas where we should be training the next generation of policy makers? … [Stephen Bruce and I talked about] how Georgetown could be the home for a workers’ rights institute. I want to thank Stephen both for his generosity and for his vision.”

For his part, Bruce said he was “floored” that the Institute would be led by Pearce, who previously served as the chairman of the National Labor Relations Board (NLRB) “during one of its most productive and innovative periods.”

“With an institute like this, there are almost limitless projects that could be undertaken…” Bruce said. “How can workers improve on their collective voices to get better pay and better working conditions, and what is the role of law and lawyers in doing that?”

“[These are] tough times for workers in America,” Shadgett said, noting the January 2019 NLRB SuperShuttle decision determining independent contractor status, and exclusion from statutory employee coverage under the National Labor Relations Act (NLRA). “It’s bad, but we’ve been here before… [Workers’] best tool for fighting back is to come together and exercise their collective power to demand change, and that’s what labor law is…there’s a role for lawyers in all of this[.]”

Lauren McFerran, a member of the National Labor Relations Board who delivered the keynote address, said that “there is a tremendous appetite, both in the academic world and in the world at large, for a discussion about how to improve the security and mobility of low-wage workers, workers of color, marginalized workers.” 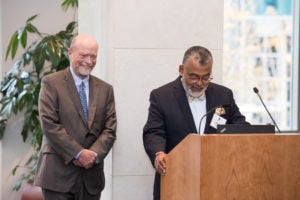 “I look forward to the excellent work that Georgetown and its Institute will do on approaching these issues from a labor law perspective,” she said.

McFerran outlined issues and past cases regarding the NLRA, which “remains the most vital and comprehensive tool for workers to help build their economic power,” she said. “The Act is an umbrella for workers’ rights.” She then went on to describe how recent decisions of the NLRB are creating more challenges to the ability of workers to act concertedly and join unions.

And where McFerran could not comment on the issue of student employees, due to open rulemaking on the issue, a panel discussion that followed filled in the gap, featuring Hunter College Executive Director and Lecturer William Herbert; Angela Thompson and Lindsay Theo of the American Federation of Teachers; and Georgetown University graduate student Deidre Nelms. Theo and Nelms are affiliated with the Georgetown Alliance of Graduate Employees (AFT)(GAGE).

The panel, moderated by Pearce, engaged in an informative and interactive discussion covering history, statistics as well as the legal and social implications of proposed rules affecting student collective bargaining in higher education.

The November 5 event was well attended with students, faculty and representatives of the labor and employment community.