Hargur Jaggi (LL.M.'06), now a judge in India, teaches persons with disabilities to climb mountains in his spare time.

If perseverance was a law school class, Hargur Jaggi (LL.M.’06) could develop the syllabus.

This summer, he was appointed to his first judicial post, as an Additional District & Session Judge, in New Delhi, India. It’s no exaggeration to say that Jaggi climbed mountains — literal and figurative — to get there. 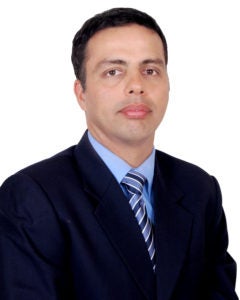 From a small town in Punjab, he showed determination early. As a teenager, it took Jaggi almost two years to learn to drive. Born with a fused left elbow and underdeveloped shoulder, operating a stick shift seemed beyond reach.

But Jaggi thought about his father, who had little formal education yet became a successful real estate developer. He told his children to have a goal and stay focused on it. For Jaggi, that meant not just driving, but going to college.

“They [his parents] always said that education is the only thing that will make you stand above,” said Jaggi.

His father wanted him to become an IAS, an esteemed India Administrative Services officer, but Jaggi yearned for more. A law elective during undergraduate studies in public administration and economics intrigued him, so he pursued law school next, graduating from the University of Delhi in 2003.

Still, in deference to his father, he applied for the IAS, only to be mocked by an officer-in-charge.

“I said, ‘Please return my papers, I don’t want to become an IAS officer,’” recalled Jaggi, who is considered “differently abled” because of his arm. It wasn’t until 2006 that India’s Supreme Court ruled against discrimination in IAS hiring. That year, Jaggi earned an LL.M. in International Legal Studies at Georgetown Law.

Jaggi ultimately aspired to a judgeship, but Indian law requires that district judges be at least 35 years old with a minimum seven years’ practice as an advocate. So he went to work with several firms, specializing in international trade and litigation, and founded a firm in 2008 with a friend.

Meantime, a chance encounter during a business meeting with Brigadier D.K. Khullar, a legendary climber who ascended Mt. Everest in 1984, opened up unexpected possibilities.

“I asked, ‘How does it feel to be on top of the world?’” Jaggi said. He was startled by Khullar’s response. “He said, ‘Go and see it for yourself.’”

Drawing on the same determination he used to master driving, Jaggi tackled a climbing wall with his brother after two climbing schools rejected him. He persisted alone for three months before a group of climbers invited him to train with them. 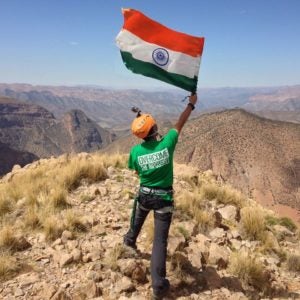 Jaggi in Morocco in September 2014.

The following year, Jaggi went on an expedition to an Alpine camp, where he summited an unnamed peak, the first in his group to reach the top. He had tears in his eyes when his teammates screamed, “Jaggi has done it!” he recalled of the 2012 trip. After that, he began to teach visually impaired and differently abled children to climb.

Cosmin Andron, a mountain guide and close friend, noticed Jaggi’s resilience and work ethic during a trip to the Indian Himalayas five years ago. Later, Andron was guiding a climber with disabilities and knew who would make the best partner for him.

“Again, I was privileged to notice Jaggi’s determination and grit,” said Andron.

Jaggi has since become the first differently abled appointee to the court under the Delhi Higher Judicial Services cadre.

“It’s a huge thing for the nation. India needs to bring people like me to the forefront,” said Jaggi, who considers his arm a distinguishing feature. “My mom said you are born to lead and you will always stand apart. Remember, that’s your strength.”