Professor Ugo Panizza of the Graduate Institute in Geneva, Georgetown Law Dean William M. Treanor, and Professor Anna Gelpern at "Debtcon," a conference co-sponsored by the Institute of International Economic Law, in April.

“I don’t think there is any time in our history,” said Georgetown Law Dean William M. Treanor, “in which sovereign debt issues have been as salient as they are today.” 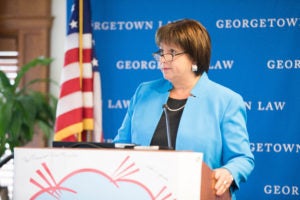 The conference began with much appreciation for Georgetown Law Professor Anna Gelpern, who Treanor said “worked tirelessly” to organize the event, along with Duke Law Professor Mitu Gulati and Professor Ugo Panizza of the Graduate Institute of International and Development Studies in Geneva.

The goal of DebtCon is to gather law and social science scholars, civil society representatives, policymakers and market participants who work on sovereign debt to find solutions to urgent policy problems. The conference has grown rapidly since its debut at Georgetown Law in January 2016. DebtCon1 attracted 120 registrants from 20 countries and international institutions. DebtCon2 was held in October of 2017 at the Graduate Institute in Geneva, bringing together more than 200 participants. Eighty paper and roundtable proposals were selected from a call for papers to present at DebtCon3, which drew approximately 340 registered participants. Georgetown IIEL Director Professor Chris Brummer and Georgetown Law Professor Anupam Chander were among the featured speakers.

“Sovereign debt is an enduring policy challenge,” Gelpern said, noting that governments on every continent and across the national income spectrum continue to struggle with unsustainable debts and destructive crises. “Governance failures and fragmentation still plague debt and crisis management. New data gaps emerge at every turn… We hope to continue the DebtCon project for as long as these problems persist.”

Panel and roundtable topics included debt and debt crisis management, governance and debt transparency, and the intersection of debt and climate vulnerabilities. Participants considered the impact of climate disasters, including Cyclone Idai, in Mozambique and Hurricane Maria in Puerto Rico; the political and humanitarian crisis in Venezuela; the return of unsustainable debt burdens in low-income countries that had received deep debt relief; and Europe’s continuing efforts to reform its economic and financial architecture, among others. Discussion focused on the growing importance of emerging economies such as China, Russia, India, and Brazil as creditors to poor and developing countries, and the need for international institutions and debt restructuring fora to adapt to this fact. 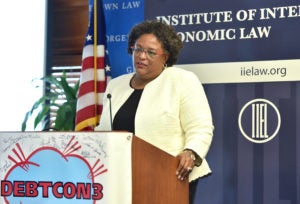 Prime Minister Mia Amor Mottley of Barbados, who was Friday’s keynote speaker, stressed the importance of democratic accountability in economic policy and debt management, especially when a government asks citizens to live with austerity measures to pay back its debts. She highlighted the debt burden inherited by her government in 2017, which took up “68, 69 cents on every dollar of revenue,” as well as the “egregious” terms of a $450 million loan that the country’s Parliament approved to avoid economic reforms. Mottley said that the Central Bank of Barbados helped sustain the over-borrowing spree by buying large volumes of government debt. 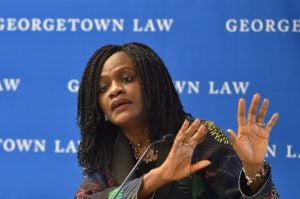 The conference closing panel, moderated by Felix Salmon of Axios and Slate, focused on the crisis in Venezuela, and the way in which institutions like the International Monetary Fund and the Paris Club of Official Bilateral Creditors are responding to the fast-changing international debt environment. In addition to Renaud-Basso and Hausmann, the panel featured IMF General Counsel Rhoda Weeks-Brown and legendary sovereign debt lawyer Lee Buchheit, who has since been appointed to advise the Guaido government. 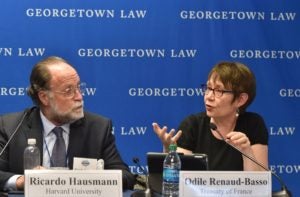 “We at Georgetown always take pride in being a place that convenes thought leaders and policymakers,” Treanor said. “This is exactly the kind of symposium that we’re so proud of.”