“We are devastated by the loss of Bob — a giant in the antitrust world who also filled such a significant role as a scholar, teacher, leader and mentor to the Georgetown Law community,” said Georgetown Law Dean William M. Treanor. “We extend our deepest sympathies to his wife Sally and the entire Pitofsky family.” 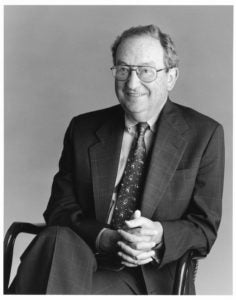 Since joining the Georgetown Law faculty in 1973, Pitofsky taught thousands of students in antitrust as well as constitutional law, consumer protection and federal courts. “During his long and productive career, Robert Pitofsky has been an antitrust master,” Professor Steven Salop once wrote.

Pitofsky grew up in northern New Jersey. After earning a B.A. in English literature from New York University in 1951 and an LL.B. from Columbia in 1954, he spent two years in the army and one year in the Civil Appellate Division of the Justice Department before joining Dewey Ballantine in New York. “In his first case, he represented Lilly and other pharmaceutical companies in an major criminal antitrust suit concerning alleged price fixing,” Salop described. “Lilly won and Robert Pitofsky was an antitrust lawyer for life.”

Pitofsky began his teaching career at New York University Law School in 1964, teaching antitrust and federal courts. In 1970, he was appointed director of the Bureau of Consumer Protection by Federal Commission Chairman Miles Kirkpatrick — having served on the Kirkpatrick Commission study of the FTC. After serving as director of the Bureau for three years, he joined the Georgetown Law faculty until the government called again. Pitofsky served as FTC commissioner from 1978 to 1981.

He rejoined the Georgetown Law faculty in 1981 and became dean in 1983, overseeing the building of the Edward Bennett Williams Law Library in the late 1980s, the expansion of McDonough Hall and the acquisition of the land for the Gewirz Student Center. He established a full development office at the Law Center and undertook the law school’s first capital campaign, which was a success. The library, noted for its architectural design and new technology, opened in January 1989.

As dean, Pitofsky intensified efforts to attract outstanding scholars to the faculty and continued the focus on interdisciplinary scholarship, adding several joint degree programs with Georgetown University’s McDonough School of Business and the Johns Hopkins University School of Hygiene and Public Health. He also “made clear his desire to elevate the moral standards of the legal profession by establishing the Georgetown Journal of Legal Ethics,” the late Father Robert F. Drinan, S.J., once noted. During his academic career, Pitofsky also taught at Harvard and Columbia and co-authored the leading antitrust casebook.

In 1995, Pitofsky became chairman of the Federal Trade Commission — convening hearings designed to update antitrust for the 21st century. The hearings led to revisions in the merger guidelines and new guidelines for joint ventures. During the Pitofsky years, the FTC also brought and won path-breaking antitrust cases and began to police consumer deception and privacy on the Internet.

Fittingly, Pitofsky was honored at Georgetown Law in September 2018, when a full day of FTC hearings were held, modeled after the ones he instituted in 1995. Pitofsky’s wife Sally, son David (L’91) and one of seven grandchildren attended the event. He is also survived by a son, Alexander, and a daughter, Elizabeth.

“The way [Pitofsky] conducted the FTC…is an example of what [the agency] can do when it’s working at its absolute best…” Joseph Simons (L’83), the current FTC chair and one of Pitofsky’s former students, said in his remarks on September 13. “Bob inspired a lot of people who have gone through their careers trying to live up to the high standards [he] set; I am one of those people.”

To add memories of Dean Pitofsky to this page, please contact mediarelations@law.georgetown.edu.

The scholarship was established in honor of Georgetown Law Professor and Dean Emeritus Robert Pitofsky. In 2015, he was awarded the Lifetime Achievement Award by The American Lawyer. His peers noted that his extraordinary career constitutes a legal trifecta: Mr. Pitofsky was a superb teacher and leader of the Georgetown Law community, an extraordinary public servant at the Federal Trade Commission, and an outstanding lawyer at Arnold & Porter. He was a giant, not only in the history of the Law Center, but also in the law.

Those wishing to make a contribution in his memory can make a gift to the Robert Pitofsky Endowed Scholarship Fund at Georgetown Law.

To make a gift by credit card, go to www.law.georgetown.edu/makeagift and besides “Other Designation”, enter “Robert Pitofsky Endowed Scholarship” or call (202) 662-9500. A member of the Law Development staff will be happy to help you make your gift. You can also make a tax-deductible contribution by check made out to Georgetown Law with “Robert Pitofsky Endowed Scholarship” in the memo line and mail it to:

Bob Pitofsky gave a great deal of himself to build the Law School of today. We, and our successors, owe him a tremendous debt of gratitude. May he rest in peace.

What a great loss. Bob was what we all strive to be: an outstanding, respected, top scholar, teacher, writer, lawyer, leader, public servant and public spirited citizen, and on top of it all, he became our dean and added mightily to our standing, our function and mission, and even the school’s physical dimensions. My heart goes out to his family. He will be missed by all of us and the broad legal and national community he served so well and all who knew him and who benefitted from his wise, humane, and soft spoken, gentle, healing counsel.

Bob was so kind and encouraging to me when I started at GULC. His sharp intellect and seriousness of purpose was leavened by a humorous acceptance of the foibles of human nature, so useful for a dean!

Georgetown is immensely in his debt for many things - but perhaps especially for persuading President Healy and the Board not seek certiorari in the case brought by gay students seeking University recognition but to accept the decision of the Court of Appeals as the basis for a settlement, which provided the grounds for a growing mutual acceptance and then celebration, and putting the University on the right side of history.

Bob was quite a senior member of the faculty when I arrived to visit at Georgetown in 1996. But while he was dean (from 1983-1986), Georgetown Law saw some important milestones for women in legal academia. See https://www.law.georgetown.edu/library/special-collections/archives/georgetown-law-timeline/. Georgetown Law made other important strides during the time Bob served as dean, but today these seem crucial to highlight and remember.

I first met Bob when he was an FTC Commissioner and I was at the FTC. He was very supportive of my work in consumer protection and helped get me involved in antitrust. Bob is the reason I came to Georgetown. He recommended me to the faculty and it was my confidence in him that led me to take the leap to become the “Ad Hoc Interdisciplinary Visitor.” Others can speak better than me about Bob’s role as Dean. (I will offer only one typical anecdote, that he gave Bob Oakley an unlimited library budget and Bob Oakley exceeded it.)

Not only was Bob the Dean at Georgetown, he was also the Dean of progressive antitrust. Bob’s role in antitrust cannot be overestimated. As a young lawyer, he was on the Kirkpatrick Commission that served to re-invigorate the FTC. He then served as Director of the Bureau of Consumer Protection (1970-73) and then as FTC Commissioner (1978-81). As Commissioner, he obviously was the respected voice who rose above the political turmoil generated by the Commission at that time, while guiding the antitrust mission. As FTC Chair (1995-2001), he reinvigorated antitrust in a variety of ways, including the major Global Competition hearings that he organized. If the FTC were a baseball team, they would retire his number.

Bob’s career was exemplary. He was the mainstream man. When Dick Craswell taught tort law to a group of FTC economists, Bob was the paradigm of the reasonable man. Indeed, he placed himself the center of the mainstream in most policy debates. I once shared a panel with Bob and Frank Easterbrook. Imagine my surprise to find that Bob referred to himself in the antitrust debates as in- between Easterbrook on his right and Salop on his left. I was too young at the time to think it was funny, but it has given me great joy over time. In fact, Bob created a lot of joy and good feelings around him. What I will miss most is his equanimity and good humor. I remember that when antitrust took its turn to the right in 2001, Bob cheered up and cheered on the entire progressive side. I wish he were around to do so now.

I adored Bob Pitofsky, professionally and institutionally, but, above all, personally. I loved his sense of humor and the way he dealt with and supported people. I am sure many of us have stories to tell. Mine involves the year I was hired. Father Timothy Healy, the President of the University used to invite new faculty members to small dinners so he could meet them. He invited me (and Bob Pitofsky, as my Dean), to a dinner many, many months in advance of when the dinner was to be held. I found out later, there were only 8 faculty invited. I, of course, accepted and put it in my computerized calendar. All the faculty at that time had work stations working off of an ancient main frame DEC computer. The DEC was not exactly reliable. One day, it crashed and erased all of the faculty calendars. So each faculty member had to reconstruct his or her entire calendar. I managed to reconstruct mine but I did not remember one dinner engagement that was far in the future. So, months later, I am walking by the Dean’s Office and Bob is standing outside. With a stern face, he said to me, “You do realize that you stood the President of the University up at a private dinner last night?” My stomach dropped. I told Bob of the computer mishap and asked him what I could possibly do to repair my standing with Father Healy. Bob then broke out in a broad grin. “Don’t worry,” he said. “Tim and I are drinking buddies. I’ll take care of it.” And he did.

I am very saddened to learn of the passing of my old Antitrust. Professor. My deepest condolences to his family.

Professor Pitofsky was one (1) of the two (2) finest professors I had at Georgetown (Prof. Ginsburg was the other). He was (i) the best in his field and (ii) an excellent teacher (those two rarely go together).

I looked forward to his class every Tuesday and Thursday and took the instruction with me in my career. I especially appreciated it since I left the law in 1994 and went into the business world. I have always been able to identify and speak to an antitrust issue and not have to leave it to the lawyers. I still proudly list Antitrust among the Relevant Coursework on my CV.

I am sure that his family knows all about his government service, but hope that they also know and understand how outstanding he was as a teacher.