The work of Professor John Mikhail and research assistant Genevieve Bentz (L’19) made news when it was cited by Judge Peter Messitte in the Emoluments case brought by D.C. and Maryland against the president.

A curious mind and a facility for language may be the hallmarks of a good lawyer. Fortunately, Professor John Mikhail and student Genevieve Bentz have those in spades.

The two have been putting them to good use in service of perhaps the biggest – and most unexpected – case either will ever work on: a series of lawsuits against the sitting president of the United States.

“It began as mostly just curiosity,” said Mikhail about the research Bentz and he did on the founding-era meaning of the term “emolument.” “I also thought some good might come of it,” he added, “because it was clear that as these cases unfolded, the courts would need to opine on the meaning of that term.” 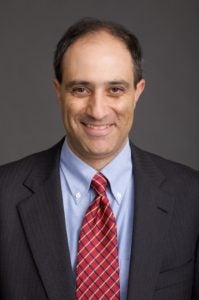 As the poet William Carlos Williams might have said, so much depends upon a definition.

Mikhail, the Agnes N. Williams Research Professor and Associate Dean for Research and Academic Programs, and Bentz (L ’19), his former student and research assistant, have spent countless hours poring over original historical documents — online, at university law libraries, even the holdings of the Folger Shakespeare Library; the writings of 18th century American, British, Dutch, and French political thinkers; and dozens of dictionaries, both English and legal, from the 16th to the 19th centuries — to get at the answer to one seemingly simple question at the heart of the lawsuits against President Trump: what does the word “emolument” really mean?

The lawsuits, brought by private parties, the District of Columbia and the state of Maryland, and almost 200 members of Congress, hinge partly on the Constitution’s foreign emoluments clause (Article I, Section 9, Clause 8), which bars any federal officeholder from accepting “any present, Emolument, Office, or Title” from a foreign state.

The plaintiffs contend that, through ownership of his hotels, Donald Trump is profiting from unconstitutional emoluments. Trump’s lawyers respond that, because he has not received the payments in his “official capacity” as president, but rather as a private citizen, the income pertains only to his personal business. On the basis of definitions found in a pair of eighteenth-century dictionaries, they further argued that the word “emolument” would have been understood by the founders to have an exceedingly narrow definition, limited to payments received in the discharge of the president’s official duties.

The government’s dictionary definitions, as it turns out, weren’t persuasive, and on July 25, U.S. District Judge Peter Messitte ruled that the case brought by DC and Maryland may go forward, citing Mikhail and Bentz’s far more exhaustive research 17 times in the process. That story was covered by the Washington Post.

Since January 2017, when Mikhail wrote a blog post on the Balkinization site, responding to what he felt was the Trump legal team’s unconvincing originalist interpretation of emoluments, much has happened, more than can be recounted here. 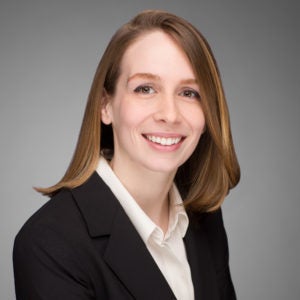 An abbreviated version would read this way: by researching every available English dictionary definition of “emolument” published from 1604 to 1806, Mikhail and Bentz persuaded Judge Messitte that the term had a much broader meaning than the one the president’s lawyers put forth. Further, by showing that none of the 10 legal dictionaries they researched defined “emolument” at all, they undermined another of the Trump team’s arguments: that the word was more a legal term of art than a common phrase.

“On the one hand, we were able to show that the ordinary definition as reflected in common English dictionaries poses a major problem for the president,” said Mikhail. “On the other hand, we demonstrated that “emolument” wasn’t a technical term at the founding, as the president’s lawyers had, in effect, been implying.”

Bentz, who studied English literature at Princeton and took graduate classes in linguistic theory, reveled in the opportunity to put her background to good use.

“Our research has really shown that law can be both academic and really useful at the same time,” she said. “Something that can be really arcane can be surprisingly relevant.”

For Mikhail, who holds a Ph.D. in philosophy but spends much of his spare time these days researching constitutional history, the experience has been both exciting and enlightening.

“Working with Gen on this project was a blast,” he said. “Over time, it became clear to us that our dictionary research really might matter to the outcome of these cases, and that was exciting. It wasn’t just an academic question.”

A federal judge's decision last week to allow an emoluments lawsuit to proceed against President Trump relied heavily on scholarship by Professor John Mikhail. In this installment of #Legalese, Professor Mikhail elaborates on why the original meaning of #emoluments may prove crucial to the outcome of this case.