Jennifer Esparza (L’20) has been named a 2018 Tillman Scholar by the Pat Tillman Foundation. The Tillman Scholars Program supports active-duty service members, veterans and their spouses.

For Georgetown Law 2L Jennifer Esparza, the decision to join the United States Marine Corps (USMC) after graduating from high school was about learning and growth, as well as a desire to serve her country.

In the end, it also motivated her to address the issue of sexual harassment in the military.

As an undergraduate at the University of Oregon, Esparza began to call attention to the problem, and those efforts have been amplified at Georgetown ― leading to her selection as a 2018 Tillman Scholar by the Pat Tillman Foundation in June. The Tillman Foundation is named for NFL player Pat Tillman, who put his NFL career on hold to serve his country in the U.S. Army in 2002; he was killed in Afghanistan in 2004. The Tillman Scholars Program supports active-duty service members, veterans and their spouses. 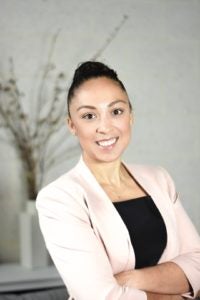 “It was a culture shock,” said Esparza.

“I was looking for my own path,” she continued. “I’d met with every branch of the military and nothing felt right until I met with the USMC. I loved the tradition and was looking for a sense of belonging, the camaraderie and the opportunity to do something bigger than myself.”

That “something” was seeing the world for 11 years. She not only saw the desert sands of Iraq, the beaches of Okinawa and the halls of the Pentagon but also negative aspects of the military.

“I had a chief warrant officer who made unwanted advances toward me and other women in our office, and made unnecessary comments about my relationship and personal life. He was later court martialed over another matter,” she said. “I eventually left that unit ― and the same thing happened, only that time two men made unwanted physical advances. When I pushed back on a gunnery sergeant, he tried to get me charged with disrespect, but backed off. He was later forced to retire.”

This was “something that women came to accept,” she said. “[T]he higher the rank you achieve, and I made it to Staff Sgt. E-6, the less women there are to confide in. So that gets harder, because you have a greater responsibility and you feel like you’re burdening someone if you speak at all, even to human resource personnel or victim’s advocates.”

Esparza was determined, in spite of the harassment, “to be stronger, perform better, lead better.

“I thought that would make them respect me more,” she said, “but it only got worse.”

After leaving the USMC, Esparza pursued degrees in international studies and in Arabic at the University of Oregon.

“My brother, a Stanford graduate who was working at U of O, was very supportive; and my mom went back, at age 57, to join me,” she said. “She finished in two years, I did it in three.”

During this period, Esparza began to reconcile her military experiences via a university program, “Get Explicit,” while educating freshmen on sexual violence prevention. “The staff members there were really passionate about addressing what sexual harassment looks like, how it happens and how bystanders can help.”

It was around this time that she first contemplated law school.

“When I was growing up, I wanted to be a lawyer, but I thought my family was too poor, I wasn’t smart enough,” Esparza said. “I applied to a few schools and Georgetown accepted me. My brother and I were shocked, but I was a student veteran who spoke a second language and my GPA was high.”

During the application process, the news broke of the Marines United scandal — involving a Facebook group posting nude photographs of servicewomen. In response, Esparza and three other veterans formed a coalition to support victims and advocate for women still serving in the Marines.

“The [Georgetown Law] admissions department considered all of what I had to offer,” she said. “It’s a military-friendly school.”

After starting at Georgetown, Esparza heard about the Pat Tillman Foundation.

“They were a Georgetown partner. I had previously applied for the grant, but was unsuccessful, so I kept trying; this year, it happened,” she said. “One piece of advice I got from a Tillman scholar was to stay active in the Georgetown and veterans’ communities and grow from my experiences.”

In addition to attending classes and activities, Esparza is externing in Washington with the Military Commissions Defense Organization, assisting a team that’s defending one of the 9-11 detainees at Guantanamo Bay. She was also recently elected vice president of Georgetown Law’s Military Law Society.

After earning her law degree, she plans to continue defending human rights and working to serve those facing capital punishment.

Today, Esparza is reflective about how her life and career experiences have shaped her worldview as she begins Year Two of Georgetown Law.

“As it turned out, serving in the military wasn’t the best experience,” she said, “but I still wouldn’t change a thing.”