Rep. Rashida Tlaib (D-Michigan), one of the first two Muslim women elected to the U.S. Congress, was born to Palestinian parents. Her father came to the United States at 19, with a fourth-grade education. His first job was at the Ford plant outside of Detroit. He became a member of the United Auto Workers. And he would inspire his 14 children with respect to labor rights.

“When I turned 18, he didn’t say ‘Happy Birthday,’ he said, ‘go register to vote…” said Tlaib, speaking onstage in Hart Auditorium on October 23, appearing at the invitation of the Muslim Law Students Association (MLSA). The Georgetown Law chapters of the American Constitution Society, the American Civil Liberties Union and Students for Democratic Reform co-sponsored the event. 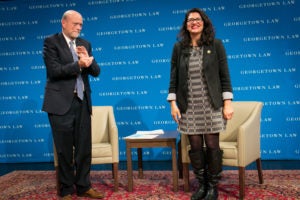 “[He] had 14 children, so we’re like a voting bloc now…he probably didn’t even realize when I ran for office that he influenced me so much, but it came because of the labor rights movement.”

Tlaib’s “incredibly compassionate” mother would also be influential, telling her daughter: “People aren’t racist; they just don’t know [any better].” To a man who yelled at Tlaib’s mother in the grocery store to take off her hijab, her mother calmly responded: “Listen; you don’t understand. Jesus was born in my country.” 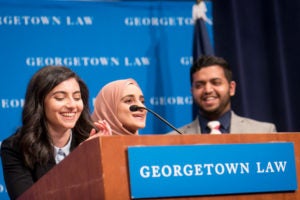 “In 2017, Muslims all over this country stood in awe as the first ever ‘Muslim ban’ came into effect in the country that we all call home,” Hussain said. “Less than a year later, we stood witness to the first-ever Muslim Congresswoman take her oath [of] office. While there exist forces beyond our control that work to stifle already underrepresented voices, we can rest assured that there are also individuals out there who are working day in and day out to ensure that the elevation of minorities is not less than a priority.”

Ahmad, a two-time former employee of the congresswoman, joked that it was “a bit like ‘take your boss to school’ day.”

“I first met her when she was elected to the state house in Michigan. I was nowhere near the voting age,” he said. “[But] for the first time, [there was] someone in public office who looked kind of like me, who believed kind of like me, whose name kind of sounded like mine. It was…an earth shattering moment and changed the trajectory of my life and career.”

At the podium and later, in a conversation with Dean Treanor, Tlaib spoke about her large family; her election to Congress; her faith; the Palestine question; and more.

“We won, and it wasn’t because we represent Muslims; we represent our neighbors,” she said. “I think that’s just incredible, especially with the heightened forms of hate out there [and] xenophobia, I feel less alone having these other two Muslim Americans [in Congress and] also this incredibly diverse class…” she said.

Tlaib and Congresswoman Ilhan Omar of Minnesota were barred from visiting Israel earlier this year, and when Tlaib was eventually allowed to visit her 90-year-old grandmother in the West Bank under restrictive conditions, the Congresswoman declined. “[My grandmother] said, ‘you are my dream manifested; you are my free bird. Why would I want you to come here and get caged?’…Every other member of Congress could go [without restrictions].”

Nevertheless, she’s optimistic about the future. “Look at this incredible class [in Congress] that just came in. These are women [who] ran in areas that no one ever thought they could ever win.”

Understand the power of human contact, Tlaib said. “Anything that you ever do in your life, don’t underestimate that at all.”

Muslim Chaplain Imam Yahya Hendi concluded the event. “You are Palestinian American,” he told the congresswoman. “I am too. I am proud of it, and you make me very, very proud[.]”