The summer before college, Professor Yael Cannon volunteered through AmeriCorps with a food bank in Washington, D.C., driving a van to summer camps and public housing complexes, bringing food to low-income children who were no longer getting meals at school.

What she saw shocked her.

“There were kids literally running to the van hungry, and this was the first time they were eating for the day,” she recalled. “Children were going hungry and living in extreme poverty right in the shadow of the Capitol.” 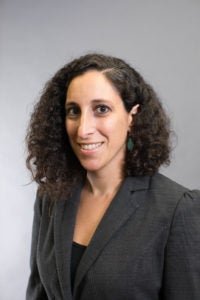 After graduating from the University of Maryland, Cannon attended Stanford Law School, intending to advocate for low-income families. As a law student working in the juvenile justice system, she saw the obstacles kids were up against, from food insecurity to untreated disabilities or mental health issues. And she gained insight that would guide her towards her current area of expertise, medical-legal partnerships.

“I wanted to figure out how I could play a role as a lawyer earlier in the lives of theses kids and see if I could provide legal advocacy that would help them thrive and prevent them from ending up in these more punitive systems,” Cannon said.

With medical-legal partnerships, “the idea is to integrate legal care into health care to get more upstream and more preventive,” she said. “It works really well when you’re focusing on kids, because pediatricians really take a holistic approach to thinking about the needs of children.”

Doctors treating children for severe asthma, for example, were giving kids the best medical treatment, but learned that the true problem — poor housing conditions, for example — was beyond their reach. They decided to bring lawyers into the hospital who could battle a recalcitrant slumlord — just as a cardiologist could be paged if a patient needed urgent heart care. Georgetown University doctors give their patients a “legal check-up” and refer them to Professor Cannon’s law clinic students, who provide legal advocacy in partnership with medical students.

After graduating from Stanford with distinction, Cannon was awarded a prestigious Equal Justice Works Fellowship. She returned to D.C. as an attorney at the Children’s Law Center’s medical-legal partnership, where she worked on-site at a pediatric clinic in Anacostia.

After teaching a disability law rights clinic at the American University, she became an associate professor at the University of New Mexico School of Law, one of the country’s first law schools to operate a medical-legal partnership. In 2016, Girard invited Cannon to Georgetown as a visiting professor to help launch the Health Justice Alliance in November 2016, which quickly won media coverage and accolades from the D.C. community.

“Georgetown has the number one law clinical program in the country,” said Cannon, for whom clinical experience was the best part of her own legal education. “The law school is really deeply committed to experiential education and giving law students an opportunity to learn how to practice law while they’re still in law school.”

What’s more, she added, “that clinic program has a long tradition of providing free legal services to some of the neediest communities in D.C.,” a population she has known since she was an 18-year-old, driving a van around the city.

Cannon, who grew up in Rockville, Maryland, is happy to be settled back in the District, but she’s even more excited about what lies ahead. She’d like to work with the Health Justice Alliance’s research team to better understand the impact of the medical-legal partnership model and develop best practices, and to find resources for post-law and medical school fellowships so recent grads can receive intensive training to become true leaders in the medical-legal partnership field.

“When Georgetown called, it wasn’t just coming home,” she said. “It was an opportunity to grow a new program at the law school with the number one clinic program in the country that is really committed to this model of teaching, and also fantastic medical and nursing schools to partner with. We’re now busy training the next generation of lawyers, doctors, and nurses to collaborate in advancing both health and justice for families living in poverty.”