So the two teamed up in Hart Auditorium on Wednesday, February 13, to encourage Maryland high schoolers to think about how laws are made. The event was part of an Early Outreach Initiative by Dean William M. Treanor and Dean of Admissions Andy Cornblatt to introduce young people to law school while they are still in high school — so that teenagers from all backgrounds can see what is possible. 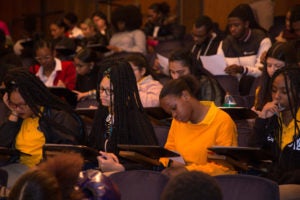 “Improving access to legal education is a critical aspect of ensuring access to justice overall,” Treanor explained. “We want more students with great potential to recognize early that they could have a bright future in the law, and that we will assist them in reaching their goals.”

Which is how Professor Johnson, who came to Georgetown Law in 2017 to develop a course on Congressional Oversight of the Executive Branch, found herself engaging a roomful of high schoolers with the question: “What do you think Congress does?”

A high school student responds that Congress writes the laws and sends them to the president to be signed.

“What’s the most famous ‘Schoolhouse Rock’…?” Johnson asks. “You all laugh, but I made it through classes with that. Do you think the [members of Congress] just sit down, take a legal pad and start writing [a bill]? How do you think the process works?”

“People propose ideas,” a high schooler says, “and sometimes those ideas are shot down.” 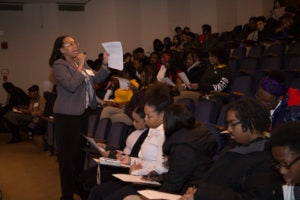 “Exactly,” Johnson says. “The challenge in legislating is that you must balance competing values and interests, and try to arrive at some consensus.”

She and Howell lead students in a mock exercise concerning eight people of different ages and backgrounds who all need a heart transplant. Who should get the one available heart?

“Professor Johnson wanted us to link rulemaking and lawmaking on Capitol Hill to an exercise that the students could engage in,” Howell explained afterwards. “At the end of the exercise, we had them tell us how what they had just done was similar to what lawmakers do on the Hill.” 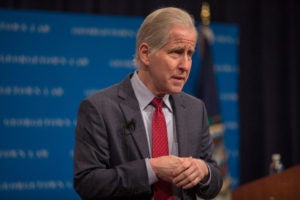 In recent years, Georgetown Law has strengthened its goal of fostering a diverse student body, which is now more than 50 percent women and 27 percent students of color. But as socio-economic barriers still prevent many from pursuing law school, the faculty, administrators and staff are determined to reduce the obstacles — through financial aid, loan forgiveness, and now, early outreach.

So Treanor and Cornblatt invited students from five Prince George’s County, Maryland, schools affiliated with the Academy of Law, Education, and Public Service, to visit on February 13. But since launching the pilot presentation in Washington, D.C., last spring, Cornblatt has also visited 14 high schools around the country (in addition to his regular college visits). He plans to visit more high schools in the future. 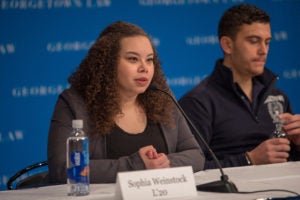 “We asked ourselves, how can we help more diverse students consider law school earlier?” Cornblatt says, noting that that most students consider law school before they even set foot on a college campus. “How can we reach young people whose families and social circles don’t include a lot of lawyers or even college graduates? These students aren’t having the same dinner conversations about the law or a future that includes graduate school as some of their peers. So how can we help them start that conversation?”

To the 100 students gathered in Hart Auditorium, Cornblatt reiterated that Georgetown Law is committed to recruiting talented students and making law school affordable. “My job, every day, is to make decisions about which people…we say ‘yes’ to…” he said. “You are all here because Georgetown Law wants to reach out to high schools and talk about what being in law school is all about, and what the practice of law is all about… We want to begin that conversation with you, or continue that conversation with you, by inviting you to come here.” 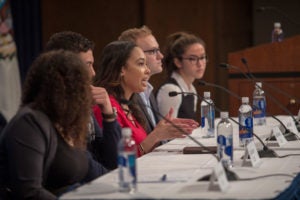 Conrad Bolston (L’13), now a senior associate at Vinson & Elkins shared how he launched a law career after his athletic career ended. A former football player at the University of Maryland, Bolston played briefly with the Minnesota Vikings and Green Bay Packers.

“You could connect more [with the law students] than with someone older,” said Saniah Hurt, a junior at Surrattsville High School. “You could think about whether you want to attend Georgetown or not.” 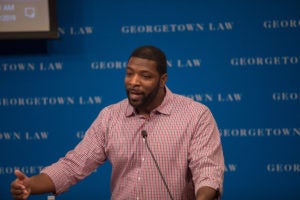 What surprised them? “That you could take evening classes, and you could work [at a job],” Hart said.

“A lot of times, [the high school] students are not exposed to the outer world, different states, different cultures, things like that,” said Ralph Patterson, who teaches civil rights and constitutional law at Surrattsville. “It broadens their horizons.”