Marshall’s watch, glasses, and Supreme Court robe, of course, emerge in the 20th century, in the second half of the tour. And along the way appear exhibits depicting the thousands of individuals, events and documents that shaped American legal history: from the Declaration of Independence and the Constitution to the U.S. Civil War, the 1964 Civil Rights Act, Loving v. Virginia and much, much more. On a speaker overhead, Aretha Franklin’s voice is belting out RESPECT — the anthem of the Civil Rights and feminist movements when it was released in 1967. 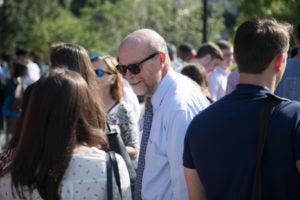 “Orientation [Week] was wonderful, and the crown jewel of it in my humble opinion was the African American Smithsonian museum (with the faculty moot court coming in at a close second!),” said Amir Ali Azinfar (L’21). The museum visit, he said, has been at the “very top of my to-do list ever since I moved to D.C. just a few short weeks ago.”

Ali Azinfar, who grew up in Tehran, Iran, moved to the United States when he was 18 and earned a bachelor’s degree in Mathematics from the University of California at Berkeley. He was drawn to law school and to Georgetown in order to address the current refugee situation.

“Had I a different upbringing, I may have been perfectly happy exploring the world of abstract theory, but that has not been my fate,” he said. “I felt the irresistible urge to be of practical benefit to my community. On the one hand, the museum had me confront the banality of greed and cruelty…on the other hand, as I walked through the many floors, each involving countless lives, I felt the resilience of mankind’s loving nature. That spirit spoke to me, and I found the reminder so helpful in these divisive times we are all enduring.”

Grace Pezzella (L’21), who grew up in Massachusetts and most recently worked on a congressional campaign, said of the visit, “It seemed fairly auspicious to begin my legal career eye to eye with Justice Thurgood Marshall’s glasses!”

“I attended Bates College…and spent my time studying the civil rights movement in the tradition of Dr. Benjamin Mays [the college’s most notable alum]. I came to Georgetown Law to continue the pursuit of finding ways (even small ones) to put good into the world, and am so thankful to do so at a university whose dedication to service and justice are at the forefront,” Pezzella said. “The museum is more than equal to the task of gracefully balancing centuries of violence and injustice with power and hard-won hope, and I felt so lucky to spend a few hours roaming the halls.” 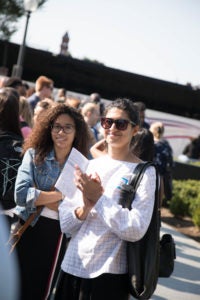 “When we studied Property Law, in our first year of law school, many of my classmates and I were stunned to find that there was no mention of slavery,” Munshi said. “We spent weeks surveying feudal traditions retained from imperial England but never that uniquely American institution that continues to haunt our legal system, our social institutions, and shared landscapes. As I begin teaching Property Law in Section 3 this semester, I will invite my students to explore with me the legacies of this founding dispossession — through histories of public and private segregation, disparate lending practices, the subprime mortgage crisis, and violent and quotidian practices of policing white space.”

Professor Anthony Cook said that it was “exhilarating” to interact with the incoming students.

“I talked to students attracted to D.C. and Georgetown Law because of their commitment to public interest and their desire to challenge disparities in wealth, income, and health, as well as threats to environment and democracy,” Cook said. “They came from varied educational backgrounds and walks of life, but the desire to find a way of integrating their passion for justice into their legal education and career was a common theme. To a person, they found the museum inspiring — its aesthetic breathtaking, its content mesmerizing, and its century-long struggle to transform dream to reality epic.”

More than 1,100 new J.D., LL.M. and S.J.D. students participated August 20 to 24 during Orientation Week events — which also included a tour of the Newseum with Professor Angela Campbell, director of the Institute for Public Representation’s Communications and Technology Clinic; a tour of the Library of Congress with Associate Dean David Mao (a former Deputy Librarian of Congress) and a Tech Tour of Microsoft by Associate Dean Paul Ohm and Alexandra Givens, executive director of the Institute for Technology Law and Policy.

“The Microsoft Tour was eye opening,” said Kristen Logan (L’21), who recently earned a computer science degree from the University of Mississippi. “For a lot of us, it was really our first taste of learning to analyze and solve problems in that type of setting. I really loved being able to collaborate with the other students on the tour and hearing how they approached [a] problem.”

“It was a good introduction to appellate arguments and certainly got me interested in heading down the street to the Supreme Court to watch an upcoming argument,” said Michael Amato (L’21), a 1L from Manchester, Connecticut, who is attending law school at Georgetown owing to an interest in government.

One in six law school applicants across the country applies to Georgetown Law, DeGioia said, and this year’s entering J.D. class has the highest median GPA in the school’s history. There are 19 teachers — 13 of whom have served in teach for America. Fifty-five are the first in their family to graduate from college. There are 29 members of the military, with 5 bronze stars. “By every measure,” DeGioia said, “all of you in this entering class deepen the commitment to excellence that defines our community.”

Treanor noted that Georgetown Law alumni — including Sen. Mazie Hirono, D.-Hawaii, who was unable to speak at the event due to Hurricane Lane — “are part of a tradition of women and men for others to make a difference in the world. 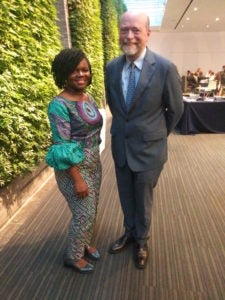 “The beauty of the ancient buildings [on Main Campus], and the speech of the president and the dean, speaks a lot about a foundation that has been laid, promoting the will of God for the good of mankind,” she said. “After the speech, I saw myself as one of [those] who has to continue with that goal.”

Like many of the incoming LL.M. students — 214 U.S.-trained, 345 international, 57 percent of whom are women and represent 70 nationalities — Suwu-Kaindoh also attended the welcome by the Law Center deans, administrators, professors and staff earlier in the week. “I realized that Georgetown Law is about 50 percent LL.M., 50 percent J.D., she said. “I was not thinking that the LL.M. [class] was going to be that huge…Georgetown is an international school. ”

Suwu-Kaindoh was inspired to participate in Georgetown’s Leadership & Advocacy for Women in Africa (LAWA) Fellowship program and hopes to better advocate for women and children. “I think I am going to learn a lot from the LL.M. program — I’m going to put all of my efforts, all of my energy into this. It’s been ten years since I’ve been in a classroom, so I am doing this all afresh.”

Even returning students felt the excitement of Orientation Week (although don’t tell them that Georgetown Law’s incoming J.D. class has the highest median GPA ever).

Zenia Memon (L’19) is a 3L student and is already looking ahead to a career in international trade. But having transferred to Georgetown after her 1L year elsewhere, she wanted to volunteer to help the incoming 1Ls with their service project at D.C. Central Kitchen. “It wasn’t an opportunity I had at my previous school, and I didn’t have the chance to do it at Georgetown,” Memon explains. “It was so lovely getting to know the 1Ls and getting to [witness] their excitement— I remember that feeling of beginning a new chapter, and I would go back to it if I could.”

Each year, Georgetown Law welcomes its newest J.D. students with a robust orientation schedule of faculty tours and service projects. Take a look back at how the incoming 1L class spent their first week with us. Also, read our web story here: https://bit.ly/2N3aH5m