Professor Anne Fleming: The Past as Prologue

On October 23, a panel of experts will discuss Georgetown Law Professor Anne Fleming’s book City of Debtors: A Century of Fringe Finance (Harvard University Press, January 2018). The panel, moderated by Professor David Vladeck, the A.B. Chettle, Jr., Professor of Law, will explore the rise and regulation of payday lending and other forms of high-cost, small dollar credit in the United States. Professor Gregory Klass, Agnes N. Williams Research Professor; Joseph McCartin, a professor of History and executive director of the Kalmanovitz Initiative for Labor and the Working Poor at Georgetown University; and Alex Horowitz of Pew Charitable Trusts, Consumer Finance Project, will also participate. The event will be held at 4 p.m. in Georgetown Law’s Gewirz Student Center. We recently spoke with Fleming about her book.

“Since I started law school, I’ve always been interested in how law works in the real world and how it actually shapes people’s daily lives,” says Professor Anne Fleming, who joined the Georgetown Law faculty in 2014. 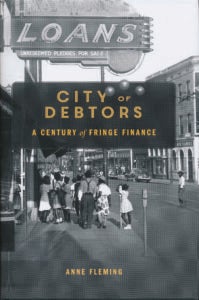 Beginning with her volunteer work tutoring third-graders in New Haven as a Yale undergraduate, Fleming has witnessed first-hand the struggles of Americans on the economic margins. As an attorney at South Brooklyn Legal Services from 2007 to 2009, the height of the financial crisis, she represented homeowners facing foreclosure.

“I was directly involved in counseling clients and talking about how their legal issues were affecting them,” she says.

As much as she liked this work, Fleming wanted a broader, more comprehensive understanding of the issues facing her clients. “I missed…the freedom I had in law school to read and write about things beyond what the immediate case in front of me demanded,” she says.

A history major at Yale, Fleming decided to earn a Ph.D. in legal history at the University of Pennsylvania and pursue an academic career. “It was a crazy decision, but I love what I do now,” she says. “Being a law professor is an amazing job.”

Fleming’s first book, City of Debtors: A Century of Fringe Finance (Harvard University Press, January 2018), reflects both her direct experience working with low-income families and her mastery of historical trends in economic law. City of Debtors brings a new perspective to the study of consumer credit, focusing on small-sum lending as a distinct industry.

Recent federal rules issued by the Consumer Financial Protection Bureau (CFPB) — and the pushback against them — have brought renewed focus on small-sum lenders. Companies offering payday loans, auto title loans, rent-to-own furniture plans and other forms of credit are frequently dubbed “loan sharks.” And some of them earn the title: as Fleming notes, a typical two-week payday loan costs $15 for every $100 borrowed, an APR of more than 300 percent.

But the need for credit among low-income borrowers is real, and has been since the rise of the wage economy and urbanization in the late 19th century.

“What I try to stress in the book is that there is a need for balance,” Fleming says. “People vilify small-sum lenders, and they have for a hundred years, because they charge a higher rate of interest than banks do.

“The tricky question is: What is the rate that’s going to grant lenders a profit without gouging consumers? And that question has been a point of disagreement between reformers and lenders for a very long time.”

Surprisingly, early industry leaders, working against a legal backdrop where high-interest loans were illegal in most states, joined with reformers to draft enabling legislation. They partnered with the Russell Sage Foundation to create a model law, which became the Uniform Small Loan Law, eventually adopted in 25 states.

In Fleming’s view, the CFPB marks a significant milestone in the history of small-sum lending, which had been governed by a hodgepodge of state laws.

“Its payday rulemaking, assuming that the rule actually takes effect, would be the first broad regulation of payday lending that would target specific products and also would apply to all borrowers.”

Payday lenders, however, have fought back against CFPB rules regulating the industry, finding allies within the CFPB, the executive branch and Congress.

Fleming is not optimistic about the outcome. “I am better at the past than predicting the future, but I think there’s a very good chance that the final rule as issued will not take effect.”

In the absence of CFPB regulation, Fleming supports experimentation in small-sum lending, such as a recent initiative to promote small loans through credit unions.

Publishing City of Debtors has been the culmination of years of work for Fleming. She is grateful for the support of her Georgetown Law colleagues — particularly Professor Daniel Ernst, the Carmack Waterhouse Professor of Legal History, and Professor Philip Schrag, the Delaney Family Professor of Public Interest Law and a subject in Fleming’s book. “He has a deep memory of litigating consumer cases at a very early point and he was incredibly generous in talking about his work.”

In writing the book, Fleming hopes to shed new light on consumer credit issues for lawyers and policymakers.

“I’ve been thrilled at how many people seem to have discovered the book and have found something of value in it,” she says. “History doesn’t tell us how to fix our current problems, but it is a reminder that we can look to the past for some guidance in thinking about how to develop solutions for the present.”