Reclaiming the Rule of Law: Georgetown Law, UPenn Co-Host Symposium on the Legacy of the U.S. Torture Regime

The 9/11 terrorist attacks – and how the U.S. government responded to them at the time – continue to affect this country and the world in ways we are only beginning to comprehend two decades later.

Torture and other illegal interrogation methods used on suspected perpetrators have stymied attempts to bring suspects to trial, denying justice and closure to families of the victims. Breaches of professional ethics by physicians, psychologists and lawyers enabled America’s torture program.

Meanwhile, in conflict areas such as Ukraine, officials struggle to enforce international laws and norms that were undermined by the ways American military and intelligence personnel treated detainees captured in Afghanistan and Iraq.

On April 27, Georgetown Law and the University of Pennsylvania’s Center for Ethics and the Rule of Law (CERL) co-hosted a symposium, “Reclaiming the Rule of Law: Guantánamo’s Forever Prisoners and the Fate of Liberal Democracy,” to discuss the legacy of the U.S. reaction to 9/11.

“When we decided as a matter of state policy to torture [prisoners], we violated and damaged our law and core values,” said Alberto Mora, former general counsel of the U.S. Navy, in introductory remarks. In 2003, Mora’s opposition to so-called “enhanced interrogation techniques” led then-Secretary of Defense Donald Rumsfeld to suspend the program temporarily. 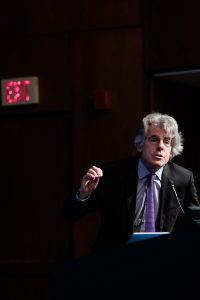 ‘They Killed Our Children’

Highlighting the event was an appearance by Yuriy Belousov, Ukraine’s lead prosecutor for human rights violations, speaking from Kyiv. His office is investigating approximately 7,600 potential war crimes cases resulting from the Russian invasion of Ukraine.

Belousov spoke of the challenge of adhering to the rule of law when faced with an angry and fearful populace. “There is a risk when you’re facing evil to be a part of it, to start to behave the same way,” he said. “It’s sometimes really difficult to explain why we should follow different standards.

“Our people often say, ‘They killed children. Why should we treat them properly? Why should we follow rules or human rights standards?’”

Belousov also brought up his concern that Russia could use the post-9/11 U.S. example as pretext for committing human rights abuses. “They could just say, ‘OK guys, why are you asking that we are keeping someone incommunicado,’ as they are right now actually, if there are such examples as Guantánamo to justify their actions.”

“What is so special about what they’re doing in Ukraine now, under an existential threat — they are still seeking to apply the Méndez Principles to ensure that as they’re trying to preserve democracy, they are also preserving the rule of law,” said Fallon, who serves on the Méndez Principles steering committee. As an official with the Naval Criminal Investigative Service in the early 2000s, Fallon attempted to prevent torture from being used at Guantánamo.

“That is frankly what we failed to do after 9/11,” said Fallon, author of the 2017 “Unjustifiable Means: The Inside Story of How the CIA, Pentagon and US Government Conspired to Torture.”

For the panel discussion, “Truth Held Captive,” that followed Belousov’s remarks, Fallon was joined by British investigative reporter Cathy Scott-Clark, co-author of the newly published book “The Forever Prisoner,” an account of how psychologist James Mitchell created the CIA’s so-called “enhanced interrogation” program. Scott-Clark gained unprecedented access to Mitchell and, through intermediaries, Guantánamo detainee Abu Zubaydah, who was waterboarded more than 80 times in a single month. 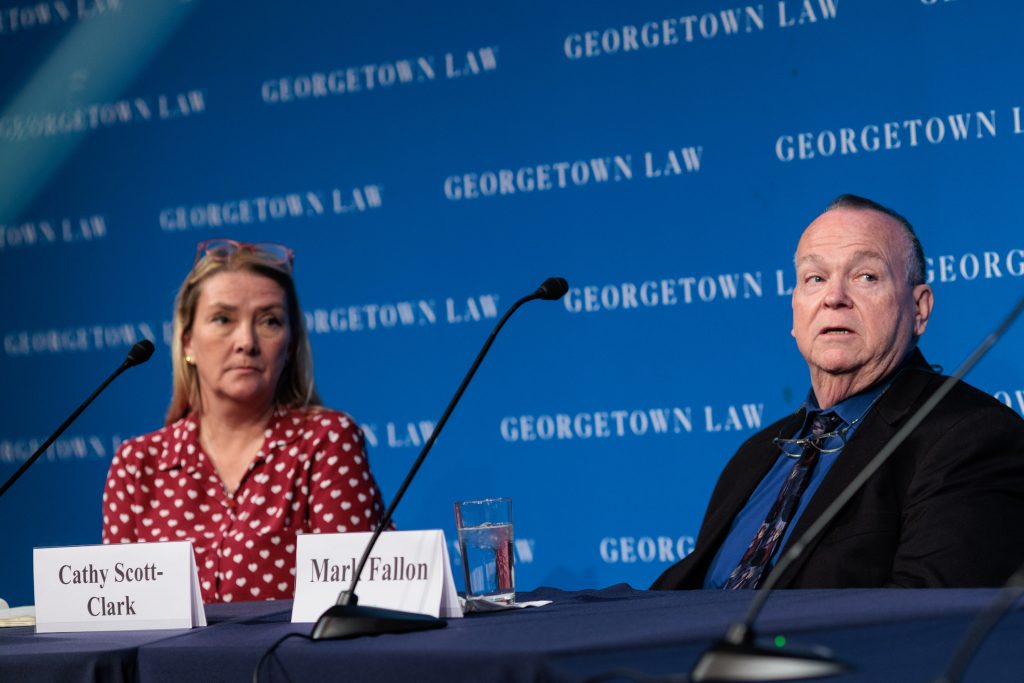 The book served as the primary source for an HBO documentary of the same name, directed by Academy Award winner Alex Gibney. Clips from the film were aired during the symposium.

“One thing that’s never really been considered is how much money and manpower was wasted by the CIA, with information passed to other government agencies based on false confessions made by detainees from Abu Zubaydah to Khalid Sheikh Mohammed,” said Scott-Clark. “Everybody made false claims to stop the torture.”

The symposium closed with the panel “Professional Ethics Abandoned,” a discussion among human rights advocates and behavioral scientists, including neuroscientist and former CIA officer Charles “Andy” Morgan, M.D., who objected to Mitchell’s techniques as they were being implemented.

Symposium participants underscored that the failure to close the Guantánamo Bay detention facility continues to tarnish America’s reputation in the world. Fallon noted that CERL has sponsored a bipartisan Guantánamo Working Group that has issued 13 recommendations for closing the facility.

“President Biden needs to stand as an example to the world,” Fallon said.“Until we remove this cloak of invisibility over anything about torture, we will never be able to legitimately tell the Russians and the world that we adhere to the rule of law and basic human rights.”