Yasmin Vafa of Rights 4 Girls and youth advocate Nataly Del Valle speak at the launch of “Beyond the Walls: A Look at Girls in D.C.’s Juvenile Justice System.”

WASHINGTON – Arrests of girls in the District of Columbia have increased dramatically, even while overall youth arrests are down, according to new research released today by Georgetown Law’s Juvenile Justice Initiative and Rights4Girls. 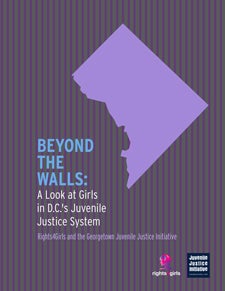 From 2007 to 2016 annual arrests of boys in D.C. fell 22 percent, while arrests of girls have swelled by 87 percent. On average, girls are being arrested at younger ages and for less serious offenses than boys, suggesting that girls’ behavior is increasingly being criminalized, according to the new report, Beyond the Walls: A Look at Girls in D.C.’s Juvenile Justice System.

“In many ways, the District has been a national leader in reforming the juvenile justice system and investing in vulnerable boys,” said coauthor Eduardo Ferrer, policy director of Georgetown Law’s Juvenile Justice Initiative. “But this report shows that those efforts have overlooked girls, who now make up one in four youth arrests in the city, up from one in seven a decade ago.”

The new findings lay out in stark relief numbers that fit with disturbing national trends for girls and juvenile justice, including a sexual abuse to prison pipeline, the criminalization of girls’ behavior in schools, and evidence that adults view black girls as less innocent, and as needing less protection than white girls.

Drawing on data collected from several D.C. agencies via Freedom of Information Act requests, the new report finds that black girls are being arrested at rates more than 30 times greater than that of white girls and white boys. Of girls facing the most serious consequence within the juvenile system – commitment to the custody of the Department of Youth Rehabilitation Services – a startling 97 percent are black. The vast majority of these girls have been charged with non-violent, non-weapons offenses, and pose no danger to public safety, the report says.

“We hope these findings serve as a wake-up call that the District is unnecessarily criminalizing a growing number of vulnerable black girls for behavior that is not dangerous,” said Yasmin Vafa, executive director of Rights4Girls and a coauthor of the report. “Girls in the juvenile justice system are largely growing up in poverty and often coping with multiple sources of trauma, including sexual abuse, family instability and neglect. We must find a way to better serve them.”