Professor Alvaro Santos, director of Georgetown Law's Center for the Advancement of the Rule of Law in the Americas, at a panel discussion on Argentina in Gewirz Student Center on March 27.

“As you know, Argentina is experiencing a process of institutional strengthening — with a government that is convinced of the importance of changing an old paradigm, willing to bury bad habits and to give its citizens a sense of justice,” said Fernando Oris de Roa, Argentina’s Ambassador to the United States.

Oris de Roa spoke at the start of “Institutional and Democratic Recovery in Argentina,” a March 27 event hosted by Foreign Lawyers at Georgetown (FLAG) and co-sponsored by Georgetown Law’s Center for the Advancement of the Rule of Law in the Americas (CAROLA) and the Latin American Law Students Association.

“One of the things that we pride ourselves on here at Georgetown and at CAROLA, is to stimulate and engage in a critical discussion to promote the free exchange of ideas, to challenge the assumptions of our hosts, and be sure that the audience can also [participate],” Santos said.

Over the last three years, the government of Argentina has taken on the difficult task of fighting corruption — a path that requires cultural change as well as unrestricted respect for the law and institutions, Oris de Roa said.

“The Argentinian judicial system has made great progress in many current trials — which would not have been possible without the political will or respect for the independence of the judicial branch,” he noted. “One would say that there still are obscure interests lurking in the shadows, trying to prevail over the rule of law, but Argentina’s decision to fight corruption is clear…we are fighting back.” 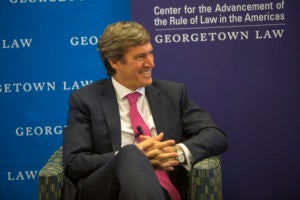 A new whistleblower law, he said, is a key piece of the fight and a clear example of a profound change. “This becomes the basis for everything else — Argentina is walking the path… We understand that there are no quick answers, or magic solutions. It is time for political maturity, and the only way out is through the respect of the law[.]”

And Oris de Roa noted that important reforms also require strong, impeccable, intelligent people — like Saravia Frías, the highest legal adviser of Argentina’s executive branch. Saravia Frías spoke not about inflation, interest rates, or exchange rates, but also about the rule of law: “the key for answering most of the challenges that we face.”

As Saravia Frías, noted, Argentina’s many turning points include a military coup d’etat in 1930 and a profound economic and social crisis in 2001. Some judges were militants, and some agencies that gave verbal orders to avoid liability for the decisions they were making. 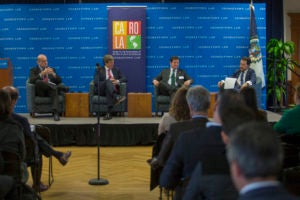 Questions posed by the 2001 crisis remain unanswered. And though Argentina has suffered crisis after crisis, the country is changing when it comes to profound legal reform, the politicians assert. “[The answer] is definitely not a short cut, the answer is the rule of law,” Saravia Frías said.

Paz and Santos guided the subsequent discussion, questioning what the rule of law in Argentina means to everyone involved, meaningful reform, and how to create economic growth with concern for the most vulnerable groups. As Santos pointed out, no one is going to say that they are against the rule of law. “It’s true in Mexico, in Brazil, in many countries in Latin America, it’s an easy way to demarcate a line, and say, what came before us as a government was barbarism, and not rule of law [versus] what is coming: rule of law institutions, enlightenment,” he said.

“Rule of law is a vague concept that can mean many things,” Santos said afterwards, noting that it is common for politicians to call out their predecessors. “What is needed is long-lasting institutional change.”

Masters Argentina — an organization that aims at connecting Argentine grad students who are studying in the US and Europe, with the main organizations, companies and leaders of our country — will be hosting a conference in Washington, D.C., April 12-14. Students from Georgetown Law’s Foreign Lawyers at Georgetown and the Argentine Student Association are among the organizers.