Saving the Planet, One Frog at a Time

Professor Hope Babcock, Lauren Phillips (L'19) and fellow Ariel Nelson worked on an amicus brief in the "dusky gopher frog case" to be heard by the Supreme Court October 1.

In an aggressive deregulatory era for environmental protection, and with an unprecedented sense of urgency, environmental law scholars at Georgetown Law prepare the next generation of attorneys.

Lauren Phillips (L’19) was dreaming about the dusky gopher frog.

Which wasn’t surprising, because nearly every waking moment during the spring semester of her second year at Georgetown Law, Phillips was researching, contemplating, discussing or writing about the warty, dark-colored, lime-sized amphibian. The frog has been listed as a federally endangered species since 2001 and is on the cusp of becoming extinct. Once prevalent in Louisiana, Mississippi and Alabama, the frogs — fewer than 100 of them — can now be found in only a few small ponds in southern Mississippi, with just one pond showing consistent frog reproduction. 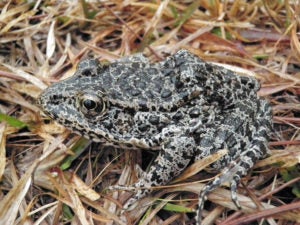 The Dusky Gopher Frog, once known as the Mississippi Gopher Frog, has an average length of about three inches and a stocky body with colors on its back that range from black to brown or gray and is covered with dark spots and warts. (Western Carolina University photo/ John A. Tupy)

As a student at Georgetown Law’s Institute for Public Representation (IPR), a clinic that operates like a law firm, Phillips was tasked with taking a first stab at writing a portion of an amicus brief for a case centered around the frog’s habitat that will be heard by the U.S. Supreme Court this fall. With each new detail that emerged, minutiae that likely wouldn’t even make it into the final draft — for instance, that the frog makes a noise that sounds like snoring, or when threatened, it plays dead, covers its eyes with its forefeet and peeks out to see if the predator is still lurking — Phillips felt more driven to protect it, and to do everything in her power to help win the case.

“There were points when I had a crisis of confidence,” Phillips said after the brief was filed this summer. “It’s a Supreme Court amicus brief. If you think about that as a second year law student, it’s intimidating.” She imagined the justices reading the paragraphs she’d helped write and thought about resources at the clinic, a bare-bones public interest law firm, versus those of the legal team representing the petitioner, an international, multi-billion-dollar timber company. “There’s a feeling of being outgunned,” she said. “I worried about having missed something. And if we lose, what will happen to the frog? It feels really high stakes.”

Frog experts aren’t the only ones concerned. Since the election of President Donald Trump, environmentalists have anticipated an aggressive deregulatory era for environmental protection. It doesn’t take a law scholar or enterprising student to understand that removing regulations is much easier than reinstating them during a future administration: Once trees are cut, habitats are destroyed, species are extinct, there’s no turning back. The era that environmentalists once feared is here, and the response for a growing number of young people is to learn how to fight back.

“We’ve seen an incredible uptick in students interested in environmental law,” said Sara Colangelo (L’07), director of Georgetown Law’s Environmental Law and Policy Program, who worked in the IPR’s environmental clinic when she was a student at the Law Center. Colangelo has been inundated with requests for information about Georgetown’s environmental law program by prospective J.D. and graduate students. In fact, the school has its largest incoming class of graduate Environmental & Energy LL.M. students in Fall 2018. “The sense of urgency you hear on the news and in social discussion — we’re seeing that urgency reflected in our students. The best thing we can do in environmental academics is really prepare this next generation of attorneys.”

Ariel Nelson, a staff attorney and clinical teaching fellow at IPR, said the administration’s actions and threats have prompted what she called, “an amazing response” from organizations, experts and students “to push back and fight on as many fronts as possible, from emission standards and endangered species to off-shore drilling and national monuments.” That’s the silver lining, said Nelson, who co-authored a forthcoming book chapter about the federal climate change lawsuit brought by Our Children’s Trust, a youth-centered activist initiative. “It’s heartening to see the environmental community doing that. Everyone is going all out, everywhere. And we want to be part of that.”

In 1991, Professor Hope Babcock came to Georgetown Law to set up the environmental section within IPR. Today, in addition to teaching a course on natural resources, she serves as a senior supervising lawyer in the clinic, overseeing the work of two fellows (“junior partners”) and a handful of students (“associates”) in what she calls a “big learning factory.”

In her four-decade career in environment law, Babcock said she’s never been as concerned about the damage to our natural resources as she is now. In 2016, the day after the election, three students sat in her office, worried about what the new administration would mean for the environment as well as how it would play out for government jobs. She gave them her pep talk (“This is what we do. Look at all the work we’ll have!”) Then, she went out seeking the right projects for her clinic. She found the dusky gopher frog.

In January, the Supreme Court granted a petition for certiorari, filed by the timber company Weyerhaeuser, to reconsider a decision from a three-judge panel of the U.S. Circuit Court of Appeals for the Fifth Circuit that upheld a rule establishing the frog’s protections — 6,477 acres of critical habitat, including 1,600 privately owned acres in St. Tammany Parish, Louisiana. The Fifth Circuit held that the U.S. Fish and Wildlife Service (FWS) reasonably concluded that the St. Tammany Parish land is essential for recovery of the frogs — even though the frogs don’t currently live there. Weyerhaeuser is challenging the decision owing to the costly economic impact of calling this a critical habitat area. (Separately, in July, the Interior Department proposed a set of changes to the Endangered Species Act that would potentially make the regulatory process more developer and business-friendly.)

Environmental experts were initially surprised that the Supreme Court agreed to take on the case — and that FWS, representing the government, maintained its position despite the change of administration. Babcock had been following the case, and she volunteered the work of her clinic when the Center for Biological Diversity and the Gulf Restoration Network reached out to request amicus briefs from dozens of groups asking the Court to affirm the Fifth Circuit’s decision and support the frog’s habitat protections.

Putting together an amicus brief on behalf of environmental law professors, in support of both the government and the environmental nonprofits, was ideal for a number of reasons. Babcock had a personal history of working with the Endangered Species Act (she previously was general counsel of the National Audubon Society). The high-profile case was nationally significant and could have far-reaching implications. Finally, it was a rare opportunity for the clinic — which Babcock calls a “capstone” for students interested in environmental law — to work with other law clinics: IPR would share the work with Vermont Law School’s Environmental Law and Natural Resources Clinic and Lewis and Clark Law School’s Earthrise Law Center. The dusky gopher frog — which was about to play a starring role at Georgetown — had landed in the right place.

Phillips’ first job on the amicus brief was to draft an email to environmental law professors with expertise in the Endangered Species Act, soliciting interest in signing the forthcoming brief. Babcock provided names of professors, starting with those who had signed previous IPR briefs. Phillips set up a spreadsheet to track responses.

Then she turned her focus to writing. The case raises two questions, which the law school clinics divided: One deals with whether FWS properly determined whether the private land — historically occupied by the frog — is critical habitat; the other, which IPR tackled, concerns the agency’s discretionary authority and whether the decision not to exclude an area from a critical habitat designation could even be reviewed by the Court. Among Phillips’ challenges — how to argue that something is not reviewable when such an argument often runs counter to a public interest posture. The solution was crafting a very narrow argument focused on a specific section of the Endangered Species Act so the clinic staff wouldn’t find themselves arguing a position that would hurt their chances in potential future cases.

Phillips watched YouTube videos of the frog, made a PowerPoint about it and outlined the arguments. She began writing, under close supervision, often late into the night. At each stage, Nelson and Babcock reviewed her work, providing written and oral feedback. They critiqued every sentence, added commas, challenged word choice and pushed her to think critically about the arguments the other side might make. The team sometimes met several times a day to discuss the brief, and they regularly sent drafts to the Vermont clinic for additional feedback.

“It’s collaborative,” Babcock said. “When students come out of the clinic experience, they should have the fellow and me sitting on their shoulders saying, ‘Do I really need this adjective? How can I rephrase that?’ It’s the nuanced fine-tuning feedback that you don’t get at a firm.”

By the sixth draft, with more restructuring and tinkering on the horizon, Phillips wondered if she would ever get the brief right. The case — and its uncertain outcome — weighed heavily on her.

“The power of Fish and Wildlife to protect species and ensure that biodiversity gets priority over development goals has never been more critical,” Phillips said. “Species move around in response to climate change. If this case goes the way we fear and the Supreme Court strikes this down, it will be a major blow to the Endangered Species Act.”

Nelson said the attention to detail required for this type of work can be stressful. “Students hear, ad nauseam, that they must pay attention to detail, but it’s hard for them to know what we mean until they work on a brief from the initial outlining phase to the final filing,” she said, noting that Phillips handled the pressure and the work wonderfully.

The clinic’s 15-page, 8,140-word section of the brief ultimately went through 12 drafts, and 26 law professors reviewed and signed it. After the spring semester, Nelson fine-tuned the document and began working with a printer to make sure the final piece was formatted correctly for the Supreme Court — administrative tasks that typically would be handled by paralegals at a law firm. “The last thing you want,” she said, “is to file your brief and have them reject it for a technicality.”

The Supreme Court will hear Weyerhaeuser Company v. United States Fish and Wildlife Service October 1, the first day of the term. Phillips and Nelson plan to attend. That afternoon, a few blocks from the Court, Georgetown Law will host a post-oral argument panel representing both sides of the case.

This fall, Phillips will begin an externship at the Natural Resources Defense Council. She said her IPR experience — working long days in an environmental law office, writing for hours on end — only cemented her long-term plans. She’d like to do exactly that after graduation. And if she finds herself in coastal Mississippi, she knows what she’ll do. “I now understand so much about the dusky gopher frog, but I’ve never seen one in person,” she said. “If I’m ever in that area, I need to try and find one.”