Sophie Huvé (LL.M.’17): Advocating for Women on a Global Stage 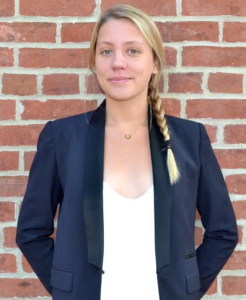 It was April 9 — one week before the UN Security Council’s open debate on sexual violence in conflict — and Huvé was briefing member states at the Permanent Mission of Canada about her recent study on the use of UN sanctions to address conflict-related sexual violence.

“My goal was to give UN diplomats talking points that their permanent representatives could use in the open debate on April 16,” said Huvé, who serves as the Hillary Rodham Clinton Law Fellow at Georgetown University’s Institute for Women, Peace and Security.

Huvé began by reminding diplomats why her research matters: sexual violence continues to be used as a weapon of war, as shown by recent reports from Syria, Libya and Myanmar. Sexual violence exacerbates conflict and promotes genocide and ethnic cleansing by humiliating, dominating and instilling fear in communities. And thousands of women and girls are victimized.

Following the April 16 open debate on sexual violence, a number of Member States asked the Council to use sanctions effectively — and the diplomatic statements seem to draw from this research, said Huvé.

“Sophie’s research on UN sanctions policy has already generated much interest and begun to inform policy,” said Ambassador Melanne Verveer, who directs the Georgetown Institute for Women, Peace and Security. “We thank the Delaneys, who fund this Fellowship for recent graduates of the Law Center, for making this work possible.”

“International law is a powerful tool in our global fight to promote gender equality,” said April McClain-Delaney (L’89). “The law fellow at Georgetown University’s Institute for Women, Peace and Security helps to shed light on how international legal frameworks can better protect women and girls in conflict, and how it can promote their meaningful participation in conflict resolution.”

Huvé says her interest in the topic began when she interned in the United Nations Security Council Affairs Division, following her legal education in France. Her supervisor at the UNSC asked her how many sanctions regimes dealt with sexual violence.

“I was surprised this information was not available already,” said Huvé.

When Huvé enrolled as a LL.M. at Georgetown, several professors encouraged her interest in the topic.

“I remember Adjunct Professor Jared Genser told me that research often sits on a bookshelf,” recalls Huvé. “He said, do research that people will pick up from the bookshelf and that brings something to the table.”

If the recent UNSC debate is any indication, Huvé’s research is destined for far more than a bookshelf.