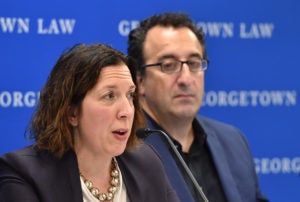 The first topic was the nomination of Brett Kavanaugh to the Supreme Court — examining not qualifications or controversy but the potential impact to the Court of any new justice nominated during the current presidential administration. Abortion, affirmative action, presidential power, religion and the death penalty/solitary confinement were five areas where a new justice could move the Court in a different jurisprudential direction than with retired Justice Anthony Kennedy, the panelists noted. The timing of these potential shifts also merited discussion.

In a discussion on Kennedy’s role as the “swing justice,” Clement expressed doubt as to whether there will still be one. “I think the Chief Justice will be the ‘governor switch,’ which will determine how quickly the Court moves and in what direction,” Clement said. “I think it would be wrong to think of the Chief Justice as a ‘swing vote’…more of a regulator on how quickly they are going to go.”

Gornstein said that if the Court issues 5-4 decisions one after another that are split along political lines, “the country at large will no longer view the Supreme Court in the same way it does now.”

“This is an outcome that he fears almost more than any other,” Gornstein said. “I predict that the Chief Justice will be trying to move things slowly by not granting cert.”

On gun control, Lederman wondered “how many of the justices really are bothered by the status quo when it comes to gun laws.”

“I think Heller and McDonald did the work that they wanted them to do, which is to basically stop the acceleration of gun control laws, put a stop to the political process on that…” he said. “I don’t see in their opinions or elsewhere [an eagerness] to go further in that way.”

The panel discussed four cases on which certioriari has been granted, including Madison v. Alabama, a death penalty case in which the defendant, owing to dementia, can no longer remember the facts of his crime. “Had Justice Kennedy been on the Court…it’s a case in which I think Justice Kennedy’s instincts would have been appealed to by the nature of the arguments being made here…” Verrilli said. “I just think it’s going to be a very different proposition for the new Court…[one] significant consideration [is] whether this..argument will be before an eight or nine justice Court.”

Shanmugam discussed Gundy v. United States — regarding the nondelegation doctrine, which states that Congress may not delegate legislative authority to the executive branch. “There are all sorts of interesting questions about the scope of that doctrine, whether the Court might seek to put a greater degree of teeth into the intelligible principle” requirement, he said, noting that Justice Clarence Thomas has suggested this. “But I for one am pretty skeptical that this is going to be the vehicle for the Court to do that.” 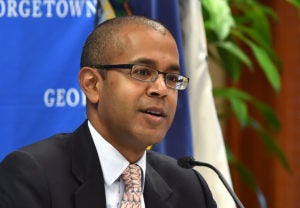 Gornstein noted that “the entire administrative state depends on a nondelegation doctrine that has no teeth in it.”

“The Court has said, you can say to an agency, do what the public interest requires, and that’s an intelligible principle…I do think there are some justices on the Court who see a real problem with this.”

Saharsky discussed the double jeopardy case of Gamble v. United States, and Clement explored the state sovereign immunity case of Franchise Tax Board v. Hyatt — both of which have been accepted for review, and seek to overrule Supreme Court precedent. The panel also explored pending cases examining whether discrimination based on sexual orientation or transgender discrimination falls within Title VII of the Civil Rights Act of 1964; and whether Maryland’s display of a war monument in the shape of a cross violates the Establishment Clause. The Court may also confront questions about the constitutionality of partisan gerrymandering.

And as the experts noted, there are a number of cases in the lower courts with the potential to become Supreme Court blockbusters: looking at whether 1) the Department of Homeland Security’s revocation of the Deferred Action for Childhood Arrivals (DACA) program is valid; 2) whether President Trump’s business operations violate the Emoluments Clause; 3) whether Congress’s repeal of the individual tax mandate renders the Affordable Care Act unenforceable; 4) whether the appointment of Robert Mueller as special counsel is constitutional; 5) whether the president’s policy of withholding funds from sanctuary cities is lawful; and 6) whether adding a citizenship question to the census is valid.

“Really, the blockbusters are all in the lower courts right now,” Gornstein said.