When Taylor Weaver (L’17) was taking Professor Anthony Cook’s Law and Entrepreneurship Practicum in the fall of 2016, he realized that minority college students with science and technology backgrounds (STEM) were not getting the right opportunities to launch their careers — such as paid internships with the federal government. 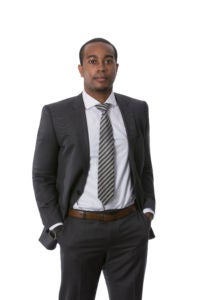 So Weaver launched Urban Energy Garden (UEG), a 501(c)(3) nonprofit that helps not only to place these students in federal externships but also to cover costs such as housing, transportation and living expenses. The first partnership was signed with the Department of Energy (DOE) in December; the DOE will now sponsor three to eight college students in offices around the United States.

Why the name, Urban Energy Garden? “We have the ability to work with the environment — that’s the garden part — and energy — dealing with technology and utilities,” Weaver explains. “As far as urban, we’re satisfying a need. Right now, urban communities tend to be most disproportionately affected by poor regulation, poor policies, poor usage of the technologies that are available to other communities.”

As a law student, Weaver assisted Cook on a project to create a residential community for artists, teachers and entrepreneurs — using renewable resources, since people in poor communities are at risk for losing their homes due to high costs like electricity and heating. “Urban Energy Garden was built off of what Professor Cook was doing in his project…I was reading about the disproportionate effects and how urban communities were being overcharged, having a high risk of being displaced.”

Introducing college students to environmental policy and energy regulations by putting them in federal externships was one solution, Weaver felt. “The goal is to expand to health, the Food and Drug Administration…but it is targeted to STEM students, who can work in almost any field dealing with environment, health, technology,” he explains.

To that end, he’s talking to the Environmental Protection Agency — and would also like to extend UEG to corporations. He’ll recommend the first UEG candidates to the Department of Energy; the Mid-Atlantic candidates will be chosen from Georgetown University and Howard University initially, though he’s looking at other institutions. “We want to educate students on different ways in which they can help their own communities or be a help to other urban communities.”

Weaver, who graduated from Southern Methodist University in 2014 with a major in International Studies, decided to go to law school in the second grade after his dad made him read a book about Supreme Court Justice Thurgood Marshall. In high school, he was invited to visit Georgetown University for football — and envisioned a path to Georgetown Law.

“Everyone was laughing at me, that I was going to be a lawyer, and a teacher overheard it,” he said. “She said, Taylor, I’m going to be honest with you, I don’t know someone who could be a student athlete and then become a lawyer — and I don’t think I’ll ever meet anyone smart enough to go to Georgetown Law.”

With that, Weaver was determined to prove his teacher wrong. “I said, I’m going to Georgetown. It was a dream come true.”

By then, he had developed an interest in startups. “I knew that Georgetown had the best clinical program in the world, and I knew that it would be the best opportunity to get hands on experience while I was in law school,” he said.

To that end, he took Professor Alicia Plerhoples’ Social Enterprise Clinic — acquiring experience with nonprofits — as well as Cook’s practicum course. Between the two, he was named an Exceptional Pro Bono Honoree for more than 175 hours of community service while he was in law school.

In December, he started an associate position with Winston & Strawn in Chicago, where he’ll work in the transactional and corporate practice group. Weaver delayed the start date after graduation specifically to work on Urban Energy Garden — but he’ll continue to further the nonprofit, investing his own salary as an associate.