The “2017 Report on the State of the Legal Market” Finds 10 Years of Stagnation Changing the Industry; Says Innovation Key to Law Firm Success

The billable hour model of decades past where law firms experienced little pushback on rates or number of hours spent is effectively dead, and the traditional law firm franchise is increasingly at risk after a decade of stagnant demand for law firm services, according to the 2017 Report on the State of the Legal Market, released today by Georgetown Law’s Center for the Study of the Legal Profession and Thomson Reuters Legal Executive Institute.

The report warns that law firms must either find ways to effectively adapt to these and other evolving competitive conditions or risk further erosion of their market positions. At the same time, the changing market dynamics present opportunities for firms 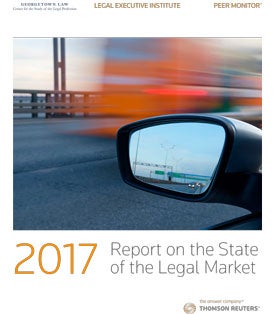 that are willing to challenge conventional thinking, take risks and innovate new approaches to the delivery of legal services, the report says.

The report discusses how, 10 years after the “Great Recession” began, its aftershocks still reverberate throughout the law firm market, which has shifted dramatically into a buyer’s market, resulting in a steady erosion of demand, rates, productivity, collection realization, and profitability. While the overall market for legal services continues to grow, law firms are dealing with new competitors and changing client needs. Clients are upending traditional law firm business models not only by demanding lower costs, but also disaggregating services to non-law firm service providers, imposing new pricing models, and reducing use of first- and second-year associates.

The report cautions that firms that merely place “bandaids on the old models” will face an increasingly uncertain future. Conversely, firms “that are able to adjust to the new market realities…and redesign their approaches to client service, pricing, legal work processes, talent management, and overall structure will enjoy an enormous competitive advantage.”

The Report on the State of the Legal Market is jointly issued annually by Georgetown Law’s Center for the Study of the Legal Profession and Thomson Reuters Legal Executive Institute, relying on data from Thomson Reuters Peer Monitor. It reviews the performance of U.S. law firms and breaks down the new market realities that drive the need for firms to take a longer-range, more strategic view of their market positions.

“It has been a difficult 10 years for law firms in many respects, and looking ahead, significant long-term challenges remain,” said James W. Jones, a senior fellow at the Center for the Study of the Legal Profession and the report’s lead author. “Actions that have helped sustain firm financial performance over the past few years, such as expense controls and reducing the equity partner ranks, are not likely to be as effective in the future. Firms need to embrace a longer-term, fundamental shift in the way that they think about their markets, their clients, their services, and their futures.”

“The law firm market is increasingly segmenting between firms willing to adopt new business models, processes for delivering legal services, and pricing, staffing and compensation models that reflect the new market dynamics, and firms that retain more traditional approaches,” said Mike Abbott, vice president, Client Management & Global Thought Leadership, Thomson Reuters. “For example, this year’s report discusses how firms that take a more pro-active approach to initiating discussions on using alternate fee arrangements are seeing greater profitability, even for work that is done under such arrangements. And they are better positioned to compete in an increasingly crowded marketplace for legal services.”

The 2017 Report on the State of the Legal Market can be downloaded at: http://legalsolutions.thomsonreuters.com/law-products/solutions/peer-monitor/complimentary-reports