What’s the long-term impact of a criminal sentence? Professor Neel Sukhatme wins a Carnegie Fellowship to find out.

As an economist and a law professor, Neel Sukhatme has long infused his legal work with insights that only empirical research methods can deliver. Now the Carnegie Corporation of New York has awarded him a major prize to investigate a phenomenon our criminal justice system often overlooks: the long-term effects of criminal sanctions on individuals and their families. 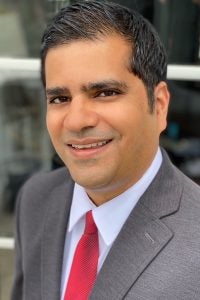 The prestigious Andrew Carnegie Fellows Program, announced Wednesday, includes a $200,000 stipend to support research. We spoke to Professor Sukhatme about his upcoming projects, how his experience as a law clerk inspires his work, and why law students should gain some familiarity with empirical methods.

What insights do you hope to gain from your research as a Carnegie Fellow?

After a defendant is convicted of a crime, a court typically decides what sanction to impose. In addition to the immediate punishment, that sanction might have a long-run impact on the defendant and their family. Unfortunately, those sorts of long-run collateral consequences are not fully considered by courts or policymakers. In part, that’s because it’s often hard to identify what those consequences might be — this is a difficult question to study in a rigorous, causal manner, and there hasn’t been much work on it in the United States. My hope is to contribute to this discussion with some new insights and ways of studying this problem.

My experience as a federal law clerk inspired me. As a clerk, my most difficult days were usually the ones when criminal defendants were sentenced. I’d look on as a defendant would express remorse while their family — a partner, a young child, a parent — would watch in despair from the back of the courtroom. I often wondered what happened to those family members. Not only were they dealing with losing a loved one to a prison term, but there were undoubtedly financial shocks to cope with as well. All of that struck me as something worthy of deeper study.

As a practicing attorney, I never had the opportunity to investigate these sorts of issues. But as a law professor and now as a Carnegie Fellow, I’m grateful to be able to study this topic in more detail.

You’ve already done some really innovative work addressing one common collateral consequence of a felony conviction — losing the right to vote. How did that come about?

In 2018, nearly 65% of voters in Florida supported a ballot initiative to restore voting rights for most former felons in the state. Unfortunately, the state subsequently passed a law to limit re-enfranchisement to those folks who paid back fines, fees, court costs and restitution associated with their sentencing.

Personally I think it’s both legally and morally wrong to condition one’s voting rights on one’s ability to pay. What’s arguably even more offensive, however, is that the state had no good system in place for informing folks what fines and fees they actually owe. So many people with past felony convictions were left guessing whether they could legally vote in the 2020 election, with little guidance from the state.

How were you able to help Floridians restore their right to vote?

I created a non-profit organization, Free Our Vote, with my former doctoral student, Alexander Billy, to serve as a data clearinghouse for these individuals. We assembled a team that collected comprehensive data on fines, fees, and court costs on over 450,000 people with past felony convictions from across 24 counties. Importantly, many Georgetown Law students played a crucial role in this effort, helping with both legal analysis and data collection.

Free Our Vote worked with our partners, the Campaign Legal Center and Florida Rights Restoration Coalition, to notify tens of thousands of former felons who owed nothing that they were free to vote. Free Our Vote also partnered with Robert F. Kennedy Human Rights and, thanks to the support of generous donors, we directly paid off fines/fees for well over 1,000 former felons, restoring their voting rights in time for the November 2020 election.

My ongoing work on Free Our Vote has reminded me of some of the collateral consequences I worried about as a law clerk. It has fueled my desire to dig deeper into this research topic.

Will there be more opportunities for Georgetown Law students to help with your upcoming Carnegie research?

Absolutely. Georgetown students have been instrumental in assisting me in my past work. Some of my upcoming research will require coding and quantitative skills, but other parts will involve legal research and writing skills.

Why should law students have some understanding of empirical methods?

As lawyers, part of our job is to think critically and ask tough questions. To do this well, it’s becoming increasingly important to understand how data can be used and misused.

I teach a course called Empirical Analysis for Lawyers and Policymakers, and my goal is for students to become intelligent consumers of empirical research — both in their personal and professional lives. Whether it’s sizing up an expert witness during litigation, analyzing an economist’s report when you’re working at a government agency, or evaluating a medical study for one’s own personal health, you need to be appropriately skeptical and figure out what assumptions might be underlying the information you’re receiving. My course teaches students those skills, and to be confident in their ability to ask good questions about empirical work.