Georgetown Law Professor Lawrence Gostin has a vision: a world that harnesses the power of law to ensure that all people, regardless of race, wealth, or national origin, enjoy good health.

Gostin has a name for his vision: global health security, the title of his new book published by Harvard University Press, where he offers a comprehensive blueprint for global reforms. And he has a name for the tools needed to make it reality: “legal determinants of health,” a twist on a familiar phrase that he made while chairing a Lancet Global Commission.

“Everybody has heard of social determinants,” he says, referring to societal influencers on health, such as safe housing, quality education, job opportunities, and racial and gender empowerment.

But Gostin stresses that law also shapes healthy countries and societies, through tools like vaccine mandates, seatbelt requirements, restrictions on sugary beverages and regulation of tobacco and e-cigarettes. Such legal tools—along with investment in public health infrastructure and research—enable nations to close inequities and prepare for emerging threats, be they bioterrorist attacks, antibiotic resistance, or deadly disease outbreaks.

Gostin coined the two terms after a life at the intersection of law and public health—and in the trenches of all-caps emergencies including AIDS, SARS MERS, Ebola, and most importantly COVID-19. While many view science as the most potent health tool, Gostin says law is even more powerful.

“You name the public health problem, whether it’s excessive sugar or salt, sedentary lifestyles, or injuries, the law has probably more impact than any other tool that we have to impact health.” 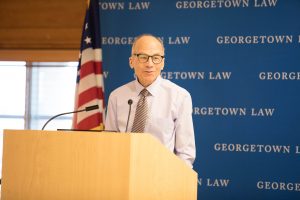 Gostin’s vision is bold and ambitious, especially amid an ongoing pandemic that has killed and maimed millions, driven up rates of mental illness, shut down huge metropolises, and wreaked economic havoc on families, communities, nations around the world.

But if anyone can make it a reality, Gostin can, says Katie Gottschalk, executive director of Georgetown Law’s esteemed O’Neill Institute for National and Global Health Law, which Gostin founded 15 years ago. “Larry is a visionary,” she says. “He understands the need for new areas of law and policy before many others.”

Gostin’s long-time friend and colleague, Tony Fauci, director of the National Institute of Allergy and Infectious Diseases at the U.S. Centers for Disease Control and Prevention (CDC), echoed the sentiment, calling Gostin “one of the most highly respected global authorities in public health law” and a “moral compass and go-to thought leader” in the field.

Indeed, decades ago, Gostin saw law’s untapped potential to create safe and healthy communities and has worked relentlessly ever since to develop the discipline of global health law. “He was a pioneer in the field,” Gottschalk says.

After graduating from Duke University Law School in 1974, Gostin moved to England, where he met his wife and studied his “first love,” mental health, while on a Fulbright scholarship. He moved on to become legal director of the leading British mental health association, where he brought landmark cases before the European Court of Human Rights.

He went on to head the British equivalent of the American Civil Liberties Union (ACLU), where he fought for individuals’ right to liberty, suffrage, and a free and fair trial. He led the British civil liberties union (called “Liberty”) during its 50th anniversary, founded by George Orwell and E.M. Forster. For his work in the U.K., the National Consumer Council awarded Gostin the Rosemary Delbridge Memorial Award “for the person who has most influenced parliament for the welfare of society.”

After teaching at Oxford University, his career took a major turn in the 1980s, when he and his wife and two sons moved to the United States and he began teaching law at Harvard University. There, he shifted his focus to HIV/AIDS (and met Fauci, who was developing his own work and name in the field of public health).

At the time, Americans understood health law in narrow, often fiduciary or financial terms: the doctor-patient relationship, confidentiality and informed consent, and health care financing. Few understood how law could prevent and control disease and make communities safer and healthier.

Gostin did, and began shifting his focus from using law as a tool to support patients’ individual rights to advocating for the collective good.

In 2002, in the wake of the anthrax attacks, the CDC asked Gostin to draft model legislation designed to expand state power in response to bioterrorism, recommendations that drew fire from civil liberties groups. Indeed, ACLU leaders publicly tore up his membership card on national television. But the vast majority of states adopted Gostin’s Model Emergency Health Powers Act.

“I still believe passionately in civil liberties and human rights. But I’ve gone from a civil libertarian to a sanitarian,” he says. “That’s been my journey.” 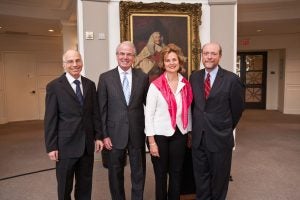 From there, he broadened his focus to global public health law, a signature focus of the O’Neill Institute, which he founded with a $10 million gift from Tim O’Neill (L’77) and his wife Linda (N’77), the largest living donors to Georgetown Law. Mr. O’Neill is vice chair of the university’s board of directors, and Mrs. O’Neill served on its board of regents.

In his inaugural lecture, Gostin said he aspired to a world that “meets the basic survival needs of the world’s least healthy people” and proposed an international treaty ensuring the right to health—and the institute has worked toward that goal ever since.

The following year, Gostin published what is now the classic legal text on public health law (University of California Press); six years later, he published another classic text on the subject, this time with a focus on the world population (Harvard University Press).

Fauci lauded Gostin’s long-standing work on behalf of the common good. “For nearly 40 years, since the early days of the HIV/AIDS epidemic, Larry and I have worked in complementary spheres of public health, enabling us to become both close friends and valuable colleagues,” he said. “Overall, our objectives are always aligned: Protect and preserve the health of people here and abroad, not only to benefit individuals but to safeguard the peace and security of the United States and the world.”

Today, Gostin advises the White House, the CDC, the U.S. Department of Health and Human Services, the United Nations, the World Health Organization, the World Bank, and other groups on the COVID-19 response and all manner of public health law. The O’Neill Institute is now providing legal counsel on pandemic treaty negotiations, global vaccinations, and guidelines on migrant health, mental health, and more.

“On any issue, we are right in the room,” Gostin says. “Our deep connections have enabled us to have the kind of reach and influence we never imagined at the outset.”

A ‘NEXT GENERATION’ BOOK

Now in his 70s, Gostin shows no signs of slowing down. COVID-19 is “the pandemic he always dreamed of,” Gostin says his wife Jean jokes. Of course, he doesn’t wish it on anyone, but it has allowed him to work deeply at the world’s highest levels to curb its spread and advocate for his broader vision. 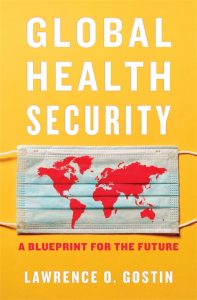 Just last month, Gostin released Global Health Security: A Blueprint for the Future, calling on nations to “future proof” the world against deadly threats. At the same time, he is supporting the launch of a new legal innovation lab at the O’Neill Institute, where he now serves as faculty director. Funded with another $10 million gift from the O’Neills, the Center for Transformational Health Law aims to develop innovative solutions to pressing health problems and future threats.

In his spare time, Gostin writes articles and commentaries at a furious pace and on a huge range of topics, from restrictions on abortion to conservatorship of Britney Spears. He’s authored more than 100 articles on COVID-19 alone, for his hometown newspaper (The Washington Post), major medical journals and farther-afield outlets like the Moscow Times and Aljazeera.

He is also in regular contact with his longtime friend, Georgetown Law Dean William M. Treanor, communication that intensified amid the pandemic. Over the last year and a half, the pair have spoken almost daily, and sometimes more often than that, about the Law Center’s health protocols. Gostin has participated in countless conversations and video calls with the Georgetown Law community to share information, answer questions, and address concerns. And he is a member of the university’s Public Health Advisory Group, offering guidance on COVID-19 mitigation strategies.

“Larry has helped keep our entire Law Center community safe and well-informed throughout this pandemic,” Treanor says. “Thanks in large part to his ever-present counsel, we were able to safely reopen this fall. I will be forever grateful to my good friend for his tireless advocacy for our health and wellbeing during this challenging time.”

One of only a dozen University Professors, Georgetown University’s highest academic rank, Gostin has received too many other academic distinctions, awards, degrees, and accolades to name. He holds multiple international academic, professorial, and editorial appointments in the United States and around the world, and he has been ranked the most productive law professor in the nation, and also the most cited expert in health law. His curriculum vitae is 55 pages long—single-spaced.

Oh, and he bikes to work from his home in suburban Maryland—two hours each way (though only one way is uphill).

Working around the clock takes a toll, but Gostin presses on. “Sometimes I reflect back and I think, ‘Well, I’ve done too much,’” he says on his cell phone as he walks out of a health appointment, scolding a landscape worker for spraying insecticide as he passes by. “But I’ve got this drive for health and justice in me that’s really very hard to extinguish.”

Gottshalk has never met anyone who works harder: “I have no idea how he does it,” she says.

He’s also “lovely and kind,” she adds, a trait she says is too rare in the workaholic city of Washington, D.C. One example: Every fall, he invites the entire O’Neill Institute community for a hike along the Potomac River followed by a healthy brunch at his home. In other words, though his outlook is global, his attention is on the individual.

“I try to make sure people are healthy,” he says. “I’ve tried to be a father figure.”