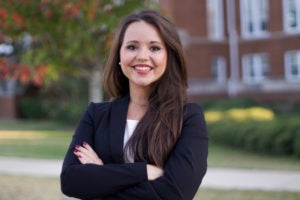 Holly was born and raised in Mississippi and comes to Georgetown with an interest in criminal law. Holly attended Mississippi State University, where she graduated Summa Cum Laude with degrees in Political Science and Criminology, along with a minor in Spanish. She became interested in capital defense work while still in middle school, but her experience attending a Mississippi public school, and later studying criminology, expanded her interest to include other areas of criminal justice and drew her to public defense work. While in college, Holly spent a summer at the Public Defender Service for the District of Columbia as an intern investigator. She also interned with the capital defense team at the Law Offices of the Shelby County Public Defender in Memphis, Tennessee, where she helped prepare mitigation evidence. With a combined interest in criminal law and public policy, Holly completed her undergraduate research on the impacts of public defense funding and in her senior year, she was named a 2016 Rhodes Scholar Finalist.

Most recently, Holly has spent the past year working abroad in Spanish speaking countries in order to refine her foreign language skills. While volunteering as a teacher in Cusco, Peru, she also helped establish and teach an English course in Cusco’s juvenile detention facility.

At Georgetown Law, Holly plans to focus on criminal law and looks forward to preparing for a career in public defense. Ultimately, Holly’s passion for public interest work is heavily intertwined with her experience growing up in Mississippi and desire to eventually return to her home state a public defender and advocate for criminal justice reform. 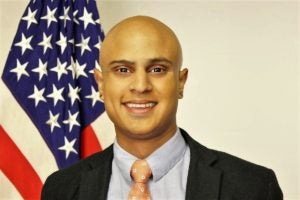 Jagir comes to the Georgetown Law evening program while working on education policy at the Office of Management and Budget (OMB) within the Executive Office of the President. At OMB, Jagir provides policy, regulatory, and budgetary oversight over Federal education programs.

Prior to joining OMB, Jagir served as a budget and policy analyst for over three years within the Office of Planning, Evaluation, and Policy Development at the U.S. Department of Education.  At the Education Department, Jagir also had served as an adviser to the Under Secretary for higher education policy and was a Presidential Management Fellow beginning in 2014.

Jagir’s career in education was sparked after teaching in the Mississippi Delta and Durham, North Carolina; working on education community development projects in Sierra Leone, and supporting LGBT and first-generation college students at Harvard College.

Jagir attended Harvard Graduate School of Education, where he earned his master’s degree and conducted policy research on early childhood assessments, teacher evaluations, and school finance.  As a Robertson Scholar and first-generation college student, Jagir received a bachelor’s degree with highest honors from the University of North Carolina at Chapel Hill and a minor in education and licensure in middle and secondary grades social studies from Duke University.  He hails from South Florida and is eager to learn more about civil rights and education law while studying at Georgetown. 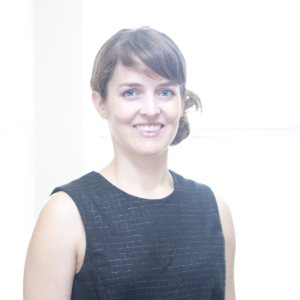 Mari Quenemoen comes to Georgetown Law after a decade of work on immigrant rights and international justice. Most recently, she worked with Legacies of War to advocate for the U.S. to clean up heavy contamination of unexploded bombs it dropped during the Vietnam War. Before that, Mari worked for six years with the Southeast Asia Resource Action Center (SEARAC), the only national civil rights organization devoted to empowering Cambodian, Hmong, Lao, and Vietnamese American refugee communities. Mari first led SEARAC’s advocacy strategies on the immigration consequences of criminal records for lawful permanent residents, before transitioning to the role of Director of Communications and Development. Previously, she led an evaluation of the International Rescue Committee’s refugee resettlement programs in Silver Spring, MD, and advocated on global humanitarian concerns in New York with Global Policy Forum and Doctors without Borders.

Raised on a farm in rural Minnesota, Mari attended the University of Minnesota in the Twin Cities, where she actively volunteered with American Indian and refugee-serving community-based organizations. For her honors thesis, she conducted ethnographic fieldwork on ethnic minority politics in southwestern China, winning the prize for best thesis in the College of Liberal Arts that year. She earned her Master of Arts in Cultural Anthropology from the University of Washington, conducting fieldwork on gender-based violence programs in Liberia, West Africa.

At Georgetown Law, Mari hopes to explore legal realities and remedies for low-income or criminalized migrants, as well as broader international laws and norms governing humanitarian response and crisis migration. 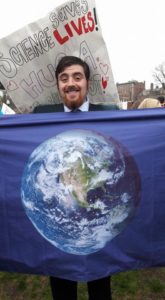 Growing up on the New Jersey shore, Lucas Stegman grew up witnessing the dramatic effects that humans can have on the natural world. Before beginning his studies at Georgetown Law, Lucas studied Ecology and Conservation Biology, as well as neuroscience, at Boston University. While studying there, he earned the Boston University Excellence in Biology Award and the BU Undergraduate Research Award in Ecology for his work on climate change and songbird migration. Following this, Lucas earned his M.S. in Conservation Medicine at the Tufts Cummings School of Veterinary Medicine.

Lucas Stegman has worked with Mass Audubon, a Massachusetts-based conservation and advocacy group, both as a field biologist and as a conservation policy intern. In this capacity, he has conducted research and contributed to Mass Audubon’s recommendations on offshore wind energy development in Massachusetts. He also helped to develop Mass Audubon legislative district maps for members of the Massachusetts State Special Committee on Environmental, Natural Resources, and Agriculture.

At Georgetown University Law Center, Lucas hopes to continue his work furthering environmental advocacy and education. He hopes to build on his scientific background and gain a deeper understanding of environmental and wildlife issues, especially as seen through the lens of constitutional law. Lucas is particularly committed to working for environmental justice for people of color and other marginalized communities. 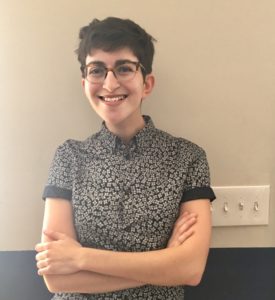 Nina Bernstein is a St. Louis native. She graduated magna cum laude from Tufts University with a degree in American Studies and a minor in Political Science. With a team of students, she organized a successful campaign for the creation of improved university policies and resources for survivors of campus sexual violence, as well as a campaign for a more robust university nondiscrimination policy. She came to D.C. for a service year with Avodah: The Jewish Service Corps, during which she coordinated legal services at Bread for the City, a local multi-service anti-poverty organization. She spent the next several years working at Bread for the City as a public benefits paralegal, representing clients receiving Social Security disability benefits, TANF, food stamps, and Medicaid in administrative proceedings to obtain wrongfully denied benefits. She became deeply invested in struggles for equitable development and affordable housing in D.C.

Nina also volunteers as an organizer with IfNotNow, an organization of young American Jews working to shift the American Jewish community against Israeli occupation policies and for Palestinian civil rights. Her experience in and enthusiasm for community organizing and building power within communities informs her perspective on legal work. She is interested in shifting governmental responses to domestic poverty, looking particularly at welfare programs and inequitable housing development, as well as in disability justice issues. She is thrilled to grow as an advocate at Georgetown Law. 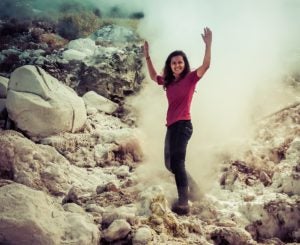 Ana was born in Medellín, Colombia but grew up in Houston, Texas. She received her undergraduate degree from Rice University, where she majored in French and Public Policy Studies and minored in Poverty, Justice, and Human Capabilities.  While at Rice, Ana worked with organizations around the world to study the causes and consequences of immigration. Her thesis focused on how to best provide holistic legal services to victims of human trafficking in Houston.

After graduating, Ana was awarded the Zeff Fellowship to study coffee, from bean to cup, in eleven countries around the world. She worked alongside farmers, cooperatives, government institutions, nonprofits, and multinational corporations to understand how coffee shapes the world today from a variety of perspectives. She trained to become a coffee ‘sommelier’ and continues to do coffee consultations around D.C. with her company, the Capital Grind. After returning to the United States, Ana worked with the Hillary for America campaign in Texas. The campaign work convinced her she wanted to get back into policy. She drove up to D.C. from Texas and started working as a Legislative Assistant for Congressman Lloyd Doggett, where she focused on immigration, foreign affairs, and criminal justice.

After leaving the Hill, Ana worked as an investigative specialist for the Public Defender Service in D.C., where she saw firsthand the urgent need for criminal justice reform. At Georgetown Law, Ana hopes to focus on the nexus between immigration and criminal justice. She hopes eventually to work for the rights of immigrants and refugees through the appellate system. 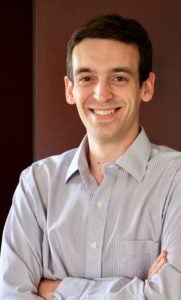 Nicholas is a New Jersey native who comes to Georgetown Law with a background in immigration and international education policy. After graduating from Boston College with degrees in international studies and Spanish, he joined the government relations department of the NETWORK Lobby for Catholic Social Justice. While there, Nicholas represented NETWORK and its constituents in meetings with members of Congress on immigration and refugee policy, with a focus on legislation surrounding family detention and unaccompanied children at the U.S.-Mexico border.

Nicholas then obtained a master’s degree in International Education Policy from the Harvard Graduate School of Education, with a specific focus on the challenges surrounding education access and quality in the Northern Triangle countries of Central America. After graduate school, he joined the Inter-American Development Bank (IADB) as a statistical analyst in the Education Division. At the IADB, he helped develop an online education statistics portal and publish a series of policy briefs with the goal of promoting evidence-based policymaking in Latin America and the Caribbean.

Since early 2017, Nicholas has also volunteered with The Young Center for Immigrant Children’s Rights, where he has advocated for the best interest of unaccompanied children from Central America. His experiences with The Young Center helped shape his passion for working with unaccompanied, undocumented children in detention. While at Georgetown Law, Nicholas hopes to further pursue his interests in immigration and refugee policy as it relates to unaccompanied minors at the U.S.-Mexico border, from both a litigation and a policy perspective.